listen)) (November 25 [O.S. November 13] 1887 – January 26, 1943) was a prominent Russian and Soviet botanist and geneticist best known for having identified the centres of origin of cultivated plants. He devoted his life to the study and improvement of wheat, corn, and other cereal crops that sustain the global population.[2][3][4][5][6] 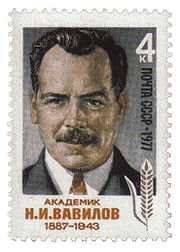 Vavilov was born into a merchant family in Moscow, the older brother of renowned physicist Sergey Ivanovich Vavilov. "The son of a Moscow merchant who'd grown up in a poor rural village plagued by recurring crop failures and food rationing, Vavilov was obsessed from an early age with ending famine in both his native Russia and the world."[7] He graduated from the Moscow Agricultural Institute in 1910 with a dissertation on snails as pests. From 1911 to 1912, he worked at the Bureau for Applied Botany and at the Bureau of Mycology and Phytopathology. From 1913 to 1914 he travelled in Europe and studied plant immunity, in collaboration with the British biologist William Bateson, who helped establish the science of genetics.

From 1924 to 1935 he was the director of the Lenin All-Union Academy of Agricultural Sciences at Leningrad. Impressed with the work of Canadian phytopathologist Margaret Newton on wheat stem rust, in 1930 he attempted to hire her to work at the institute,[8] offering a good salary and perks such as a camel caravan for her travel. She declined, but visited the institute in 1933 for three months to train 50 students in her research.

While developing his theory on the centres of origin of cultivated plants, Vavilov organized a series of botanical-agronomic expeditions, and collected seeds from every corner of the globe. In Leningrad, he created the world's largest collection of plant seeds.[9] Vavilov also formulated the law of homologous series in variation.[10] He was a member of the USSR Central Executive Committee, President of All-Union Geographical Society and a recipient of the Lenin Prize. 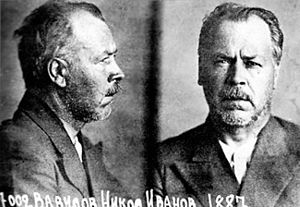 Botanist Nikolai Vavilov's mugshot, taken at the time of his arrest.

Vavilov encountered the young Trofim Lysenko and at the time encouraged him in his work. At the time Lysenko was not the best at growing wheat and peas, but Vavilov continued to support him and his ideas. It was not until later when he was under pressure from the Soviet State that Vavilov began to criticize the non-Mendelian concepts of Trofim Lysenko, who won the support of Joseph Stalin. As a result, Vavilov was arrested on August 6, 1940, while on an expedition to Ukraine. He was sentenced to death in July 1941. In 1942 his sentence was commuted to twenty years' imprisonment; he died in prison in 1943,[11] of starvation.[12]

The Leningrad seedbank was diligently preserved through the 28-month Siege of Leningrad. While the Soviets had ordered the evacuation of art from the Hermitage, they had not evacuated the 250,000 samples of seeds, roots, and fruits stored in what was then the world's largest seedbank. A group of scientists at the Vavilov Institute boxed up a cross section of seeds, moved them to the basement, and took shifts protecting them. Those guarding the seedbank refused to eat its contents, even though by the end of the siege in the spring of 1944, nine of them had died of starvation.[7]

In 1943, parts of Vavilov's collection, samples stored within the territories occupied by the German armies, mainly in Ukraine and Crimea, were seized by a German unit headed by Heinz Brücher. Many of the samples were transferred to the SS Institute for Plant Genetics, which had been established at the Lannach Castle near Graz, Austria.[13]

In 1955, the verdict against Vavilov was posthumously set aside at a hearing of the Military Collegium of the Supreme Court of the Soviet Union, undertaken as part of a de-Stalinization effort to review Stalin-era death sentences.[14] By the 1960s his reputation was publicly rehabilitated and he began to be hailed as a hero of Soviet science.[15]

Today, the N.I. Vavilov Institute of Plant Industry in St. Petersburg still maintains one of the world's largest collections of plant genetic material.[16] The Institute began as the Bureau of Applied Botany in 1894, and was reorganized in 1924 into the All-Union Research Institute of Applied Botany and New Crops, and in 1930 into the Research Institute of Plant Industry. Vavilov was the head of the institute from 1921 to 1940. In 1968 the institute was renamed after Vavilov in time for its 75th anniversary.

A minor planet, 2862 Vavilov, discovered in 1977 by Soviet astronomer Nikolai Stepanovich Chernykh is named after him and his brother Sergey Ivanovich Vavilov.[17] The crater Vavilov on the far side of the Moon is also named after him and his brother. The story of the researchers at the Vavilov Institute during the Siege of Leningrad was fictionalized by novelist Elise Blackwell in her 2003 novel Hunger. That novel was the inspiration for the Decemberists' song "When The War Came" in the 2006 album The Crane Wife, which also depicts the Institute during the siege and mentions Vavilov by name.

The standard author abbreviation Vavilov is used to indicate this individual as the author when citing a botanical name.[18] 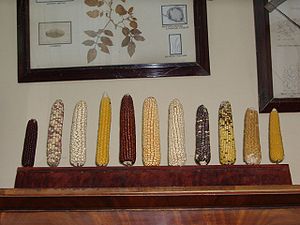