Nikolai Nikolayevich Yudenich (July 30 [O.S. July 18] 1862 - October 1933) was a commander of the Russian Imperial Army during World War I. He was a leader of the anti-communist White movement in Northwestern Russia during the Civil War.[1]

Yudenich was born in Moscow, where his father was a minor court official. Yudenich graduated from the Alexandrovsky Military College in 1881 and the General Staff Academy in 1887. He first served with the Life Guards Regiment in Lithuania from November 1889 to December 1890. In January 1892, he was transferred to the Turkestan Military District, and was promoted to lieutenant colonel in April 1892. He was a member of the Pamir Expedition in 1894, and was promoted to colonel in 1896. From September 20, 1900 Yudenich served on the staff of the 1st Turkestan Rifle Brigade. 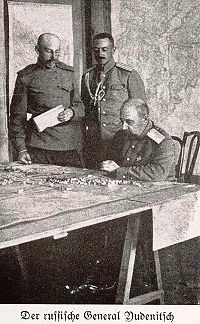 At the beginning of World War I Yudenich was appointed Chief of Staff of the Russian Caucasus Army. Major operations included the Battle of Sarikamish, a victory against Enver Pasha of the Ottoman Empire. In January 1915, Yudenich was promoted to General of Infantry, and replaced Count Illarion Ivanovich Vorontsov-Dashkov as commander of the Caucasus Campaign. Yudenich tried to exploit the Turkish defeat by attacking into Turkish territory, specifically around Lake Van during the Siege of Van. While the Russians did capture Van in May 1915, they were forced to withdraw from the city two months later. The Ottoman 3rd Army re-occupied Van in August.

At this time, Grand Duke Nicholas, having been removed from command of all of Russia's armies, was put in charge of the Caucasus region. Yudenich was given a free hand by the Grand Duke and, in September, the Russians retook Van and re-established the Administration for Western Armenia in June 1916. Fighting back and forth around this region continued for the next 14 months without a clear victory for either side.

In 1916 Yudenich successfully carried out an offensive, winning the Battle of Erzurum (1916) and the Trebizond Campaign. In the summer of that year, his forces fought off a Turkish counter-attack culminating in the Battle of Erzincan (which included the presence of Turkish General Mustafa Kemal). During this battle, Yudenich was awarded the Order of St. George (2nd degree), the final time this decoration was awarded in the Russian Empire.

Following the February Revolution, in 1917 Yudenich was appointed commander of the Caucasus Front, but in May the Russian Provisional Government removed him from command for insubordination, and on the direct orders from Alexander Kerensky, he retired from the army. Yudenich then relocated from Tbilisi to Petrograd, where he supported the Kornilov Revolt. 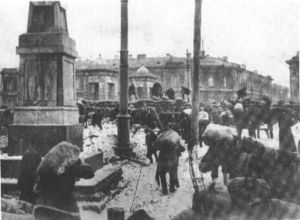 Following the October Revolution of 1917, Yudenich went into hiding from the Bolsheviks, sheltered by a former sergeant of the Life Guards of Lithuania, who had served with Yudenich from his time in the Pamirs. He managed to escape to exile in Finland in January 1919. In Helsinki, Yudenich joined the "Russian Committee", which had formed in November 1918 to oppose the Bolsheviks, and was proclaimed leader of the White movement in northwest Russia with absolute powers. In the spring of 1919 Yudenich visited Stockholm, where he met with diplomatic representatives of Great Britain, France and the United States, trying with limited success to obtain assistance in developing a Russian volunteer corps to fight the Bolsheviks.

In June 1919 Yudenich made contact with Admiral Aleksandr Kolchak's All-Russian Government based in Omsk, which subsequently acknowledged him as commander-in-chief of all Russian armed forces operating against the Bolsheviks in the Baltic Sea and in northwest Russia. Kolchak also provided much-needed funds to pay and equip his forces. In June 1919 Yudenich went to Tallinn to meet with General Aleksandr Rodzyanko, the commander of the White Russian Northern Army, attacking Petrograd formally under the Estonian High Command. Yudenich appointed Rodzyanko as his aide.

In August 1919, under pressure from the British government, ad hoc in order to issue a legally binding guarantee of the independence of his key ally Estonia, Yudenich was forced to create the counterrevolutionary "Regional Government of Northwest Russia",[2] which included Monarchists, Socialist-Revolutionaries and Mensheviks. Yudenich served as Minister of War and spent the next two months organizing and training his army. By September 1919 Yudenich had a fairly well-organized army of approximately 17,000 troops, with 53 guns and six tanks. The six tanks were supplied by Great Britain, together with their volunteer crews, who were the only British ground troops to fight alongside the Northwestern Army.[3]

In early October 1919, Yudenich launched his army against Petrograd, which was only lightly defended as the Red Army was actively engaged on several other fronts: fighting Kolchak's forces in Siberia and several Cossack armies in the Ukraine. Yudenich's friend from the Imperial Russian Army, General Mannerheim, asked the president of Finland, Ståhlberg, to join Yudenich's force and attack Petrograd with help from the Finnish White Guards. Yudenich would have recognized Finland's independence and the country's pro-Triple Entente relationships would be recognized. As Kolchak (nominally the leader of the White Armies) would not recognize Finland's independence, Stålhberg denied Mannerheim's request. Overall, the Northwestern Army was nationalistic and patriotic and thus rejected ethnic particularism and separatism.[citation needed] The Northwestern Army generally believed in a united multinational Russia, and opposed separatists wanting to create nation-states.

On 12 October 1919, the Whites retook Yamburg. Two days later Yudenich was approaching Gatchina. On 19 October 1919 his troops reached the outskirts of Petrograd; however his forces failed to secure the vital Moscow – Saint Petersburg Railway, which allowed the Revolutionary Military Council to send in massive reinforcements to prevent the fall of the city. Yudenich's stalled offensive collapsed in late October, and the 7th and 15th Red Armies repulsed the White Russian troops back into Estonia in November. Distrustful of the White Russians, the Estonian High Command disarmed and interned the remains of Northwestern Army which retreated behind Estonian lines. Politically, the Bolsheviks secured a separate armistice with Estonia on 3 January, by promising to recognize Estonian independence (an offer contrary to the White Army and Kolchak government position).[4] On 28 January 1920 General Bułak-Bałachowicz, together with several Russian officers and the Estonian Police, arrested Yudenich as he tried to escape to western Europe. Afterwards he was released from prison.

After his release, Yudenich departed for exile in France.[5] During his remaining 13 years, he played no significant role among White movement émigré community there. Yudenich died at Saint-Laurent-du-Var, near Nice on the French Riviera, on 5 October 1933. 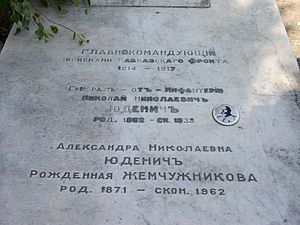