Nikolaus von Falkenhorst (born Nikolaus von Jastrzembski; 17 January 1885 – 18 June 1968) was a German General in the Second World War. He planned and commanded the German invasion of Denmark and Norway in 1940, and was commander of German troops during the occupation of Norway from 1940 to 1944.

Falkenhorst was born in Breslau (now Wrocław, Poland) into an ancient Silesian military and noble family, the Jastrzembski of Bad Königsdorff-Jastrzemb (Jastrzębie-Zdrój) in Upper Silesia. In 1911 he voluntarily changed this Polish-derived family name to the Germanized Falkenhorst (meaning "falcon's nest"). He joined the Imperial German army in 1903 and during the First World War was given various regimental and staff appointments, including a stint in Finland, which would later figure into his primary assignment in World War II. In 1919, after the end of the war, he served in the Freikorps, then transferred to the Reichswehr, and between 1925 and 1927 served in the operations division of the German War Ministry.

Falkenhorst was promoted to Colonel on 1 October 1932, and between 1933 and 1935 was appointed military attaché at the German embassies in Czechoslovakia, Yugoslavia and the Romania. On 1 July 1935, he was promoted to Generalmajor (Brigadier General) and Chief of Staff of the Third Army, and in 1937 to Generalleutnant (Major General). In 1939 he commanded the XXI Army Corp during the Invasion of Poland, and was promoted to General der Infanterie (Lieutenant General). 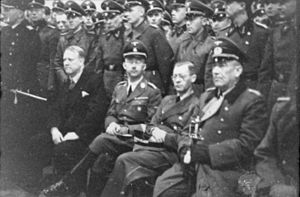 On 20 February 1940, Hitler informed Falkenhorst that he would be ground commander for the invasion of Norway (Operation Weserübung), and gave him until 5 p.m. the same day to come up with a basic plan. With no time to consult military charts or maps, Falkenhorst picked up a Baedeker tourist guidebook of Norway at a stationery store on his way to his hotel room, where he planned the operation from maps he found in it.[1] Hitler promptly approved his plan.

The invasion was a success, aside from heavy losses inflicted upon the Kriegsmarine (navy). Allied forces tried to counter the German move, but Falkenhorst's troops drove them out of the country. For his part in the success he was promoted to Generaloberst (Colonel General).

Falkenhorst remained in charge of the German occupation forces in Norway. In contrast to the civilian administration, the military forces aimed to form an understanding with the Norwegian people, and Falkenhorst ordered his men to treat them with courtesy.

In December 1942, Falkenhorst made a plan for the invasion of Sweden if necessary (Operation Polarfuchs; "Arctic Fox")[citation needed] which required 10 German divisions. Falkenhorst thought it would succeed in 10 days.[2]

Falkenhorst was dismissed from his command on 18 December 1944, for opposing certain radical policies of Josef Terboven, the Nazi Reich Commissioner of German-occupied Norway. He was transferred to the Führerreserve, but no other assignment ever came.

After the war, Falkenhorst was tried by a joint British-Norwegian military tribunal for violating the rules of war. He had passed on the Führerbefehl known as the "Commando Order" which required captured saboteurs to be shot as spies, and several were. He was therefore convicted and sentenced to death in 1946. The sentence was however later commuted to twenty years' imprisonment, after a successful appeal by Sven Hedin.

Falkenhorst was released from Werl prison on 23 July 1953, due to bad health. In 1968, following a heart attack, he died at Holzminden, West Germany, where his family had settled after fleeing from Lower Silesia.[3] He was buried in the Holzminden Cemetery.