From Infogalactic: the planetary knowledge core
Jump to: navigation, search
For the actor, see Nikolay Bogolyubov (actor).
This name uses Eastern Slavic naming customs; the patronymic is Nikolayevich and the family name is Bogolyubov.

Nikolay Nikolayevich Bogolyubov (Russian: Никола́й Никола́евич Боголю́бов; 21 August 1909 – 13 February 1992), also transliterated as Bogoliubov and Bogolubov, was a Soviet mathematician and theoretical physicist known for a significant contribution to quantum field theory, classical and quantum statistical mechanics, and the theory of dynamical systems; a recipient of the Dirac Prize (1992).

Nikolay Bogolyubov was born on 21 August 1909 in Nizhny Novgorod, Russian Empire to Russian Orthodox Church priest and seminary teacher of theology, psychology and philosophy Nikolay Mikhaylovich Bogolyubov, and Olga Nikolayevna Bogolyubova, a teacher of music. The Bogolyubovs relocated to the village of Velikaya Krucha in the Poltava Governorate (now in Poltava Oblast, Ukraine) in 1919, where the young Nikolay Bogolyubov began to study physics and mathematics. The family soon moved to Kiev in 1921, where they continued to live in poverty as the elder Nikolay Bogolyubov only found a position as a priest in 1923.[1]

He attended research seminars in Kiev University and soon started to work under the supervision of the well-known contemporary mathematician Nikolay Krylov. In 1924, at the age of 15, Nikolay Bogolyubov wrote his first published scientific paper On the behavior of solutions of linear differential equations at infinity. In 1925 he entered Ph.D. program at the Academy of Sciences of the Ukrainian SSR and obtained the degree of Kandidat Nauk (Candidate of Sciences, equivalent to a Ph.D.) in 1928, at the age of 19, with the doctoral thesis titled On direct methods of variational calculus. In 1930, at the age of 21, he obtained the degree of Doktor nauk (Doctor of Sciences, equivalent to Habilitation), the highest degree in the Soviet Union, which requires the recipient to have made a significant independent contribution to his or her scientific field.

This early period of Bogolyubov's work in science was concerned with such mathematical problems as direct methods of the calculus of variations, the theory of almost periodic functions, methods of approximate solution of differential equations, and dynamical systems. This earlier research had already earned him recognition. One of his essays was awarded the Bologna Academy of Sciences Prize in 1930, and the author was awarded the erudite degree of doctor of mathematics. This was the period when the scientific career of the young Nikolai Bogolyubov began, later producing new scientific trends in modern mathematics, physics, and mechanics.

And this can explain, as the authors believe, the need to shape the collection of problems of non-linear perturbation theory into a special science, which could be named NON-LINEAR MECHANICS.

Distinctive features of the Kiev School approach included an emphasis on the computation of solutions (not just a proof of its existence), approximations of periodic solutions, use of the invariant manifolds in the phase space, and applications of a single unified approach to many different problems. From a control engineering point of view, the key achievement of the Kiev School was the development by Krylov and Bogolyubov of the describing function method for the analysis of nonlinear control problems.

In the period 1928—1973, Nikolay Bogolyubov worked in the Institute for Theoretical Physics of the Academy of Sciences of the Ukrainian SSR holding the position of the Director of the institute since 1965. He lectured at Kiev University in the period 1936—1959.

After the German attack against the Soviet Union on 22 June 1941 (beginning of the Great Patriotic War), most institutes and universities from west part of Russia were evacuated into east regions far from the battle lines. Nikolay Bogolyubov moved to Ufa, where he became Head of the Departments of Mathematical Analysis at Ufa State Aviation Technical University and at Ufa Pedagogical Institute, remaining on these positions during the period of July 1941 – August 1943.

In the period 1943–1946, Bogolyubov's resesarch was essentially concerned with the theory of stochastic processes and asymptotic methods. In his work[citation needed] a simple example of an anharmonic oscillator evolving under the force of the form as a superposition of incoherent sinusoidal oscillations with continuous spectrum was used to show that depending on a specific approximation time scale the evolution of the system can be either deterministic, or a stochastic process satisfying Fokker-Planck equation, or even a process which is neither deterministic nor stochastic. In other words, he showed that depending on the choice of the time scale for the corresponding approximations the same stochastic process can be regarded as both dynamical and Markovian, and in the general case as a non-Markov process. This work was the first to introduce the notion of time hierarchy in non-equilibrium statistical physics which then became the key concept in all further development of the statistical theory of irreversible processes.

In 1945, Bogolyubov proved a fundamental theorem on the existence and basic properties of a one-parameter integral manifold for a system of non-linear differential equations. He investigated periodic and quasi-periodic solutions lying on a one-dimensional manifold, thus forming the foundation for a new method of non-linear mechanics, the method of integral manifolds.

In 1946, he published in JETP two works on equilibrium and non-equilibrium statistical mechanics which became the essence of his fundamental monograph Problems of dynamical theory in statistical physics (Moscow, 1946).

On 26 January 1953, Nikolay Bogolyubov became the Head of the Department of Theoretical Physics at MSU, after Anatoly Vlasov decided to leave the position on January 2, 1953. 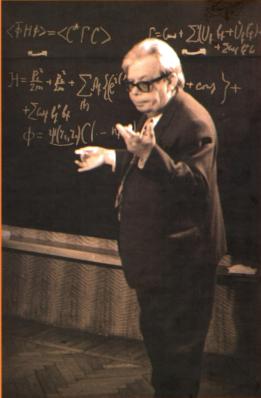 In 1947, Nikolay Bogolyubov organized and became the Head of the Department of Theoretical Physics at the Steklov Mathematical Institute. In 1969, the Department of Theoretical Physics was separated into the Departments of Mathematical Physics (Head Vasily Vladimirov), of Statistical Mechanics, and of Quantum Field Theory (Head Mikhail Polivanov). While working in the Steklov Institute, Nikolay Bogolyubov and his school contributed to science with many important works including works on renormalization theory, renormalization group, axiomatic S-matrix theory, and works on the theory of dispersion relations.

In the late 1940s and 1950s, Bogoliubov worked on the theory of superfluidity and superconductivity, where he developed the method of BBGKY hierarchy for a derivation of kinetic equations, formulated microscopic theory of superfluidity, and made other essential contributions. Later he worked on quantum field theory, where introduced the Bogoliubov transformation, formulated and proved the Bogoliubov's edge-of-the-wedge theorem and Bogoliubov-Parasyuk theorem (with Ostap Parasyuk), and obtained other significant results. In the 1960s his attention turned to the quark model of hadrons; in 1965 he was among the first scientists to study the new quantum number color charge.

Since 1956, he worked in the Joint Institute for Nuclear Research (JINR), Dubna, Russia, where he was a founder (together with Dmitry Blokhintsev) and the first director of the Laboratory of Theoretical Physics. This laboratory, where Nikolay Bogolyubov worked for a long time, has traditionally been the home of the prominent Russian schools in quantum field theory, theoretical nuclear physics, statistical physics, and nonlinear mechanics. Nikolay Bogolyubov was Director of the JINR in the period 1966—1988.

His son Nikolay Boglyubov (jr) is a theoretical physicist working in the fields of mathematical physics and statistical mechanics.

Nikolay Bogoliubov was a scientific supervisor[2] of Yurii Mitropolskiy, Dmitry Shirkov, Selim Krein, Iosif Gihman, Tofik Mamedov, Kirill Gurov, Mikhail Polivanov, Naftul Polsky, Galina Biryuk, Sergei Tyablikov, Dmitry Zubarev, Vladimir Kadyshevsky, and many other students. His method of teaching, based on creation of a warm atmosphere, politeness and kindness, is famous in Russia and is known as the "Bogoliubov approach".

Institutions, awards and locations have been named in Bogolyubov's memory:

In 2009, the centenary of Nikolay Bogolyubov's birth was celebrated with two conferences in Russia and Ukraine:

He built a new theory of scattering matrices, formulated the concept of microscopical causality, obtained important results in quantum electrodynamics, and investigated on the basis of the edge-of-the-wedge theorem the dispersion relations in elementary particle physics. He suggested a new synthesis of the Bohr theory of quasiperiodic functions and developed methods for asymptotic integration of nonlinear differential equations which describe oscillating processes.