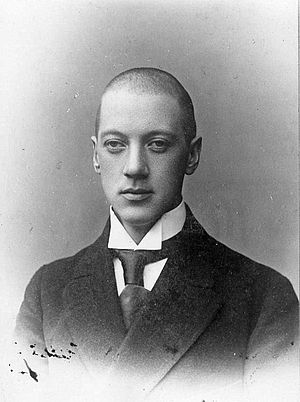 Nikolai Gumilyov during his senior years in gymnasium

listen); April 15 NS 1886 – August 25, 1921) was an influential Russian poet, literary critic, traveler, and military officer. He was the co founder of the Acmeist movement and one of the most notable Russian poets of the 20th century. Nikolay Gumilev was arrested and executed by the Cheka, the secret Soviet police force in 1921.

Nikolay was born in the town of Kronstadt on Kotlin Island, into the family of Stepan Yakovlevich Gumilyov (1836–1920), a naval physician, and Anna Ivanovna L'vova (1854–1942). His childhood nickname was "Montigomo," the Hawk's Claw.[1] He studied at the gymnasium of Tsarskoe Selo, where the Symbolist poet Innokenty Annensky was his teacher. Later, Gumilyov admitted that it was Annensky's influence that turned his mind to writing poetry. 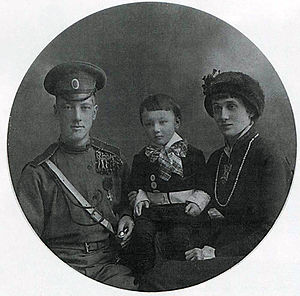 His first publication were verses I ran from cities into the forest (Я в лес бежал из городов) on September 8, 1902. In 1905 he published his first book of lyrics entitled The Way of Conquistadors. It comprised poems on most exotic subjects imaginable, from Lake Chad giraffes to Caracalla's crocodiles. Although Gumilyov was proud of the book, most critics found his technique sloppy; later he would refer to that collection as apprentice's work.

From 1907 and on, Nikolai Gumilyov traveled extensively in Europe, notably in Italy and France. In 1908 his new collection Romantic Flowers appeared. While in Paris, he published the literary magazine Sirius, but only three issues were produced. On returning to Russia, he edited and contributed to the artistic periodical Apollon. At that period, he fell in love with a non-existent woman Cherubina de Gabriak. It turned out that Cherubina de Gabriak was the literary pseudonym for two people, a disabled schoolteacher and Maximilian Voloshin, and on November 22, 1909 he had a duel with Voloshin over the affair.

Gumilev married Anna Akhmatova in April 25, 1910. He dedicated some of his poems to her.[2] On September 18, 1912, their child Lev was born. He would eventually become an influential and controversial historian.

Like Flaubert and Rimbaud before him, but inspired by exploits of Alexander Bulatovich and Nikolay Leontiev, Gumilyov was fascinated with Africa and travelled there almost each year. He explored, helping development of Ethiopia, sometime hunted lions, and brought to the Saint Petersburg museum of anthropology and ethnography a large collection of African artifacts. His landmark collection The Tent (1921) collected the best of his poems on African themes, one of them "Giraffe" [3]

In 1910, Gumilyov fell under the spell of the Symbolist poet and philosopher Vyacheslav Ivanov and absorbed his views on poetry at the evenings held by Ivanov in his celebrated "Turreted House". His wife Akhmatova accompanied him to Ivanov's parties as well.

Dissatisfied with the vague mysticism of Russian Symbolism, then prevalent in the Russian poetry, Gumilyov and Sergei Gorodetsky established the so-called Guild of Poets, which was modeled after medieval guilds of Western Europe. They advocated a view that poetry needs craftsmanship just like architecture needs it. Writing a good poem they compared to building a cathedral. To illustrate their ideals, Gumilev published two collections, The Pearls in 1910 and the Alien Sky in 1912. It was Osip Mandelstam, however, who produced the movement's most distinctive and durable monument, the collection of poems entitled Stone (1912).

According to the principles of acmeism (as the movement came to be dubbed by art historians), every person, irrespective of his talent, may learn to produce high-quality poems if only he follows the guild's masters, i.e., Gumilyov and Gorodetsky. Their own model was Théophile Gautier, and they borrowed much of their basic tenets from the French Parnasse. Such a program, combined with colourful and exotic subject matter of Gumilev's poems, attracted to the Guild a large number of adolescents. Several major poets, notably Georgy Ivanov and Vladimir Nabokov, passed the school of Gumilev, albeit informally.

When World War I started, Gumilyov hastened to Russia and enthusiastically joined a corps of elite cavalry. He fought in battles in East Prussia and Macedonia.[4] For his bravery he was invested with two St. George crosses (December 24, 1914 and January 5, 1915).

His war poems were assembled in the collection The Quiver (1916). In 1916 he wrote a verse play, Gondla, which was published the following year; set in ninth-century Iceland, torn between its native paganism and Irish Christianity, it is also clearly autobiographical, Gumilev putting much of himself into the hero Gondla (an Irishman chosen as king but rejected by the jarls, he kills himself to ensure the triumph of Christianity) and basing Gondla's wild bride Lera on Gumilev's wife Akhmatova. The play was performed in Rostov na Donu in 1920 and, even after the author's execution by the Cheka, in Petrograd in January 1922: "The play, despite its crowd scenes being enacted on a tiny stage, was a major success. Yet when the Petrograd audience called for the author, who was now officially an executed counter-revolutionary traitor, the play was removed from the repertoire and the theatre disbanded."[5] (In February 1934, as they walked along a Moscow street, Osip Mandelstam quoted Gondla's words "I am ready to die" to Akhmatova, and she repeated them in her "Poem without a Hero."[6])

During the Russian Revolution, Gumilyov served in the Russian Expedition Corps in Paris. Despite advice to the contrary, he rapidly returned to Petrograd. There he published several new collections, Tabernacle and Bonfire, and finally divorced Akhmatova (August 5, 1918), whom he had left for another woman several years prior. The following year he married Anna Nikolaevna Engelhardt, a noblewoman and daughter of a well-known historian.

Despite the hard experiences of real travels and battles, he remained, to the end of his life, a schoolboy entranced by the Iliad of Childhood - The Adventures of Huckleberry Finn and Tom Sawyer. He never outgrew the influence of Mayne Reid, Alexandre Dumas, père, Jules Verne, Gustave Aimard and others."[1] In 1920 Gumilyov co-founded the All-Russia Union of Writers. Gumilev made no secret of his anti-communist views. He also crossed himself in public and didn't care to hide his contempt for half-literate Bolsheviks.

On August 3, 1921 he was arrested by the Cheka on allegation of participation in monarchist conspiracy known as "Petrograd military organization" or Tagantsev conspiracy. On August 24, the Petrograd Cheka decreed execution of all 61 participants of the case, including Nikolai Gumilev. They were shot on August 25 in the Kovalevsky Forest.[7][8] The case was officially declared as "completely fabricated" and all victims rehabilitated by Russian authorities only in 1992.[9]

Maxim Gorky, his friend and fellow writer, hurried to Moscow, obtained an order to release Gumilyov from Lenin personally, but upon his return to Petrograd he found out that Gumilyov had already been shot.

Hayward, in an introduction to a book of Akhmatova's poetry, writes that the execution placed a stigma on Anna and her son with Nikolai, Lev. Lev's arrest in the purges and terrors of the 1930s were based on his being his father's son.[10]

Although banned in the Soviet times, Gumilev was loved for his adolescent longing for travel and giraffes and hippos, for his dreams of a fifteen-year-old captain" and was "a favorite poet among geologists, archaeologists and paleontologists."[1] His "The Tram That Lost Its Way" is considered one of the greatest poems of the 20th century.[1]

The Russian progressive rock band Little Tragedies used the poetry of Gumilyov in many of their songs,[11] and had four albums which were entirely based on Gumilev's poetry (The Sun of the Spirit, Porcelain Pavilion, Return, Cross).[11][12]