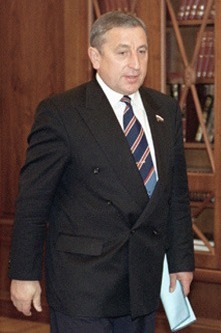 Nikolay Mikhailovich Kharitonov (Russian: Николай Михайлович Харитонов; born 30 October 1948) is a Russian politician from the Novosibirsk region. He is a leading member of the Agrarian Party of Russia, and a member of the State Duma, the Russian parliament.[1][2] In 2004 he ran for the office of president of Russia in the presidential elections. His candidacy was supported by the Communist Party of the Russian Federation (CPRF). He came second,[3] with 13.7% of the votes cast. Kharitonov proposed "re-erecting [the] statue of Soviet secret police founder Felix Dzerzhinsky", which was pulled down in 1991.[2]

He is married with four daughters.