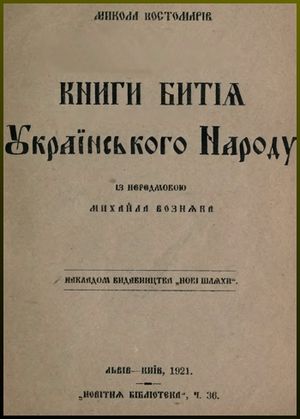 Book on existence of the Ukrainian people, 1921; Ideological program of the St Cyril and Methodius Brotherhood

Nikolay Ivanovich Kostomarov (Russian: Никола́й Ива́нович Костома́ров, Nikolai Ivanovich Kostomarov; May 16, 1817, vil. Yurasovka, Voronezh Governorate, Russian Empire – April 19, 1885, Saint Petersburg, Russia) is one of the most distinguished Russian historians, a Professor of History at the Kiev University and later at the St. Petersburg University, an author of many books, including his famous biography of the seventeenth century Hetman of Zaporozhian Cossacks Bohdan Khmelnytsky, and his fundamental 3-volume Russian History in Biographies of its main figures (Russkaya istoriya v zhizneopisaniyakh yeyo glavneyshikh deyateley). Nikolay Kostomarov was so important for Ukrainian culture, that some researchers observe him as a Ukrainian historian, as well as Russian.

Kostomarov was born in Russian family. His father was landlord Ivan Petrovich Kostomarov, his mother Tat'yana Petrovna Mel'nikova was of commoner origin, that's why Nikolay Kostomarov de jure was a "serf" of his father. As a historian, Kostomarov's writings reflected the romantic trends of his time. He was an advocate of the use of ethnography and folksong by historians, and claimed to be able to discern the "spirit" of the people, including "national spirit", by this method. On the basis of their folksongs and history, he claimed that the peoples of what he called Northern or Great Rus' on one hand and Southern or Little Rus' on the other (Russians and Ukrainians, respectively) differed in character and formed two separate nationalities. In his famous essay "Two Russian Nationalities" ("Две русские народности"), a landmark in the history of Ukrainian national thought, he propagated what some consider to be the stereotypes of Russians inclined towards autocracy, collectivism, and state-building, and Ukrainians inclined towards liberty, poetry, and individualism.

In his various historical writings, Kostomarov was always very positive about Kievan Rus', about what he considered to be its veche system of popular assemblies, and the later Zaporozhian Cossack brotherhood, which he believed in part was an heir to this system. By contrast, he was always very critical of the old Muscovite autocracy and its leaders. In fact, he gained some popular notoriety in his day by doubting the story of Ivan Susanin, a legendary martyr hero viewed as a savior of Muscovy.

Kostomarov was a very religious man and a devout adherent of the Orthodox Church. He was critical of Catholic and Polish influences on Ukraine throughout the centuries, but, nevertheless, was considered as more open to Catholic culture than many of his Russian contemporaries, and later, the members of the Slavic Benevolent Societies.

Kostomarov was also active in cultural politics in the Russian Empire being a proponent of a Pan-Slavic and federalized political system. He was a major personality in the Ukrainian national awakening, a friend of the Ukrainian poet Taras Shevchenko, a defender of the Ukrainian language in literature and in the schools, and a proponent of a populist form of Pan-Slavism, a popular movement in a certain part of the intelligentsia of his time. In the 1840s he founded an illegal political organization called the Brotherhood of Saints Cyril and Methodius in Kiev (for which he suffered arrest, imprisonment, and exile), and through the 1860s to the 1880s, as a university professor, scientist and well-known writer of political essays he continued to promote the ideas of federalism and populism in Ukrainian and Russian historical thought. He had a profound influence on later Ukrainian historians such as Volodymyr Antonovych and Mykhailo Hrushevsky. 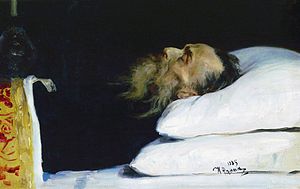 Kostomarov in His Coffin (by Ilya Repin)

Kostomarov was also a romantic author and poet, a member of the Kharkiv Romantic School. He published two poetry collections (Ukrainian Ballads (1839) and The Branch (1840)), both collections containing historical poems mostly about Kievan Rus' and Bohdan Khmelnytsky. His poetry is known for including vocabulary and other elements of traditional Ukrainian folk songs.

He also wrote historical dramas, however these had little influence on the development of Ukrainian theater. He also wrote prose in Russian (the novelette Kudeyar, 1875), and Russian mixed with Ukrainian (Chernigovka, 1881), but these also are considered insignificant.[1] Another short story (Animal Riot,1879–80, published in 1917) takes Russia as its analogue, and imagines a revolution of farm animals. The work has been cited by as a possible antecedent to George Orwell's Animal Farm,.[2]