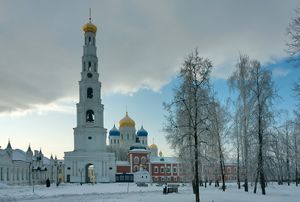 Monastery of St. Nicholas has one of the tallest bell towers in the Orthodox world

Nikolo-Ugreshsky Monastery (Russian: Николо-Угрешский монастырь) is a walled stauropegic Russian Orthodox monastery of St. Nicholas the Miracle-Worker located in a suburb of Moscow formerly known as Ugreshi and now called Dzerzhinsky. It is the town's main landmark and is featured on the city emblem.

The monastery is known to have existed as early as 1521, when the Tatar horde of Mehmed I Giray reduced Ugreshi to ashes. The old katholikon of St. Nicholas (later destroyed by the Soviets) was built in the 16th century. The Ugreshi Monastery was one of the walled abbeys defending approaches to the Russian capital from the south.

A late legend attributes its foundation to Dmitry Donskoy who, on his way to the Kulikovo Field, is supposed to have made a stay there and determined to give a decisive battle to the Tatars after seeing an image of St. Nicholas in a pious dream. He "is reputed to have called out in ecstasy ugresha ("this sets my heart aflame") and founded a monastery on the very spot".[1] 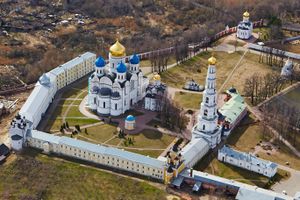 The monastery was greatly expanded in the 17th century due to its proximity to the royal residences in Izmailovo and Kolomenskoye. Tsar Alexis made a habit of visiting the monastery several times a year. After the Great Moscow Synod the sanctuary was visited by the Patriarchs of Moscow, Alexandria, and Antioch. Metropolitan Macarius II spent the latter years of his life in Ugreshi, and Archpriest Avvakum was imprisoned there.[1] The great katholikon (main church) of the monastery was built to a Russian-Byzantine design by Alexander Kaminsky between 1880 and 1894. It is one of the largest churches in the Moscow region and has a set of new frescoes dating from 2009.

After the Russian Revolution, the monastery was closed and its grounds were given over to a children labour colony in 1920. In an effort to fight children homelessness, Felix Dzerzhinsky had it transformed into a labour commune.[1] The town was later renamed after Dzerzhinsky. Many church buildings were destroyed; others survived in a state of great disrepair. The ruined buildings were returned to the Russian Orthodox Church in 1991. The monastery has since been fully restored and operates several museums, including one dedicated to Nicholas II of Russia.[2] There is a new seminary on the grounds.