The Nilo-Saharan languages are a proposed family of African languages spoken by some 50–60 million Nilotic people, mainly in the upper parts of the Chari and Nile rivers, including historic Nubia, north of where the two tributaries of the Nile meet. The languages extend through 17 nations in the northern half of Africa: from Algeria to Benin in west; from Libya to the Democratic Republic of the Congo in the center; and from Egypt to Tanzania in the east.

Eight of its proposed constituent divisions (excluding Kunama, Kuliak, and Songhay) are found in the modern two nations of Sudan and South Sudan, through which the Nile River flows. As indicated by its hyphenated name, Nilo-Saharan is a family of the African interior, including the greater Nile basin and the central Sahara desert.

Joseph Greenberg named the group and argued it was a genetic family in his 1963 book The Languages of Africa. It contains the languages not included in the Niger–Congo, Afroasiatic, or Khoisan families. It has not been demonstrated that the Nilo-Saharan languages constitute a valid genetic grouping, and linguists have generally seen the phylum as "Greenberg's wastebasket", into which he placed all the otherwise unaffiliated non-click languages of Africa.[1][2] Its supporters accept that it is a challenging proposal to demonstrate, but contend that it looks more promising the more work is done.[3][4][5]

Some of the constituent groups of Nilo-Saharan are estimated to predate the African neolithic. Thus, the unity of Eastern Sudanic is estimated to date to at least the 5th millennium BC.[6] Nilo-Saharan genetic unity would necessarily be much older still and date to the late Upper Paleolithic.

This larger classification system is not accepted by all linguists, however. Glottolog (2013), for example, a publication of the Max Planck Institute in Germany, does not recognize the unity of the Nilo-Saharan family, or even of the Eastern Sudanic branch.

The constituent families of Nilo-Saharan are quite diverse. One characteristic feature is a tripartite singulative–collective–plurative number system, which Blench (2010) believes is a result of a noun-classifier system in the protolanguage. The distribution of the families may reflect ancient water courses in a green Sahara, when the desert was more habitable than it is today.[7]

Within the Nilo-Saharan languages are a number of languages with at least a million speakers (most data from SIL's Ethnologue 16 (2009)). In descending order:

Some other important Nilo-Saharan languages under 1 million speakers:

The total for all speakers of Nilo-Saharan languages according to Ethnologue 16 is 38–39 million people. However, the data spans a range from ca. 1980 to 2005, with a weighted median at ca. 1990. Given population growth rates, the figure in 2010 might be half again higher, or about 60 million.

History of the proposal

The Saharan family (which includes Kanuri, Kanembu, the Tebu languages, and Zaghawa) was recognized by Heinrich Barth in 1853, the Nilotic languages by Karl Richard Lepsius in 1880, the various constituent branches of Central Sudanic (but not the connection between them) by Friedrich Müller in 1889, and the Maban family by Maurice Gaudefroy-Demombynes in 1907. The first inklings of a wider family came in 1912, when Diedrich Westermann included three of the (still independent) Central Sudanic families within Nilotic in a proposal he called Niloto-Sudanic;[9] this expanded Nilotic was in turn linked to Nubian, Kunama, and possibly Berta, essentially Greenberg's Macro-Sudanic (Chari–Nile) proposal of 1954. In 1920 G. W. Murray fleshed out the Eastern Sudanic languages when he grouped Nilotic, Nubian, Nera, Gaam, and Kunama. Carlo Conti Rossini made similar proposals in 1926, and in 1935 Westermann added Murle. In 1940 A. N. Tucker published evidence linking five of the six branches of Central Sudanic alongside his more explicit proposal for East Sudanic. In 1950 Greenberg retained Eastern Sudanic and Central Sudanic as separate families, but accepted Westermann's conclusions of four decades earlier in 1954 when he linked them together as Macro-Sudanic (later Chari–Nile, from the Chari and Nile watersheds). Greenberg's later contribution came in 1963, when he tied Chari–Nile to Songhai, Saharan, Maban, Fur, and Koman-Gumuz and coined the current name Nilo-Saharan for the resulting family. Lionel Bender noted that Chari–Nile was a historical artifact of the discovery of the family, and did not reflect an exclusive relationship between these languages, and the group has been abandoned, with its constituents becoming primary branches of Nilo-Saharan—or, equivalently, Chari–Nile and Nilo-Saharan have merged, with the name Nilo-Saharan retained. When it was realized that the Kadu languages were not Niger–Congo, they were commonly assumed to therefore be Nilo-Saharan, but evidence for this has not been presented.

Although progress has been made since Greenberg established the plausibility of the family, Nilo-Saharan has not actually been demonstrated. Koman and Gumuz remain poorly attested, and so are difficult to work with, while arguments continue over the inclusion of Songhai. Blench (2010) believes that the distribution of Nilo-Saharan reflects the waterways of the wet Sahara 12,000 years ago, and that the protolanguage had noun classifiers, which today are reflected in a diverse range of prefixes, suffixes, and number marking.

Dimmendaal (2008) notes that Greenberg (1963) based his conclusion on sound evidence, and that the proposal as a whole has become more convincing in the decades since. Mikkola (1999) reviewed Greenberg's evidence and found it convincing. Roger Blench notes morphological similarities in all putative branches, which leads him to believe that the family is likely to be valid.

Koman and Gumuz, however, are poorly known, and have been difficult to evaluate until recently. Songhai is markedly divergent, probably due to massive influence from the Mande languages. Also problematic are the Kuliak languages, which are spoken by hunter-gatherers and appear to retain a non-Nilo-Saharan core; Blench believes they may have been similar to Hadza or Dahalo and shifted incompletely to Nilo-Saharan.

Dimmendaal (who had originally supported their inclusion) believes the Kadu languages form a small family of their own. Anbessa Tefera and Peter Unseth consider the poorly attested Shabo language to be Nilo-Saharan, though unclassified within the family due to lack of data; Dimmendaal considers it to be a language isolate on current evidence. Proposals have sometimes been made to add Mande (usually included in Niger–Congo), largely due to its many noteworthy similarities with Songhay rather than with Nilo-Saharan as a whole.

The extinct Meroitic language of ancient Kush has been accepted by linguists such as Rille, Dimmendaal, and Blench as Nilo-Saharan, though others argue for an Afroasiatic affiliation. It is poorly attested.

There is little doubt that the constituent families of Nilo-Saharan—of which only Eastern Sudanic and Central Sudanic show much internal diversity—are valid groups. However, there have been several conflicting classifications in grouping them together. Each of the proposed higher-order groups has been rejected by other researchers: Greenberg's Chari–Nile by Bender and Blench, and Bender's Core Nilo-Saharan by Dimmendaal and Blench. What remains are eight (Dimmendaal) to twelve (Bender) constituent families of no consensus arrangement. 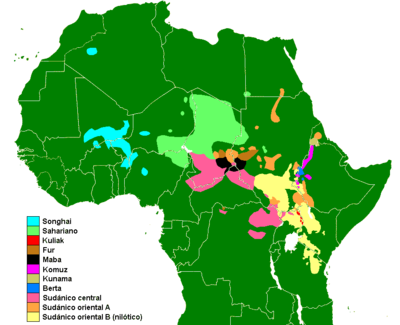 The branches of the Nilo-Saharan languages.

Joseph Greenberg, in The Languages of Africa, set up the family with the following branches. The Chari–Nile core are the connections that had been suggested by previous researchers.

Gumuz was not recognized as distinct from neighboring Koman; it was separated out (forming "Komuz") by Bender (1989).

By 2000 Bender had abandoned the Chari–Nile and Komuz branches, added Kadu, and removed Kuliak from Eastern Sudanic. He stated that Shabo could not yet be adequately classified, but might prove to be Nilo-Saharan.

With a better understanding of Nilo-Saharan classifiers, and the affixes or number marking they have developed into in various branches, Blench believes that all of the families postulated as Nilo-Saharan belong together. He proposes the following tentative internal classification, with Shabo closest to Koman and Gumuz, and Songhai closest to Saharan, a relationship which had not previously been suggested:

Proposals for the external relationships of Nilo-Saharan typically center on Niger–Congo: Gregersen (1972) grouped the two together as Kongo–Saharan. However, Blench (2011) proposed that the similarities between Niger–Congo and Nilo-Saharan (specifically Atlantic–Congo and Central Sudanic) are due to contact, with the noun-class system of Niger–Congo developed from, or elaborated on the model of, the noun classifiers of Central Sudanic.

Nilo-Saharan language present great differences being a highly diversified group. Because of this it is difficult to reconstruct many aspects of Proto-Nilo-Saharan language, and some authors remain skeptical about the relationship of some groups with the core Nilo-Saharan language family. Dixon rejects that these language form a valid philogenetic clade. However, two very different reconstructions of the proto-language have been proposed, the first due to L. Bender and the second due to C. Ehret.

The phonemes /*d2, *t2/ correspond to coronal plosives, the phonetic details are difficult to specify, but clearly, they remain distinct from /*d, *t/ and supported by many phonetic correspondences (another author, C. Ehret, reconstructs for the coronal area the sound [d̪], [ḍ] and [t̪], [ṭ] which perhaps are closer to the phonetic detail of /*d2, *t2/, see infra)

Bender gave a list of about 350 cognates and discuss in deep the grouping and the phonological system proposed by Ch. Ehret. Blench (2000) "The classification of Nilo-Saharan", p. 299 compares both systems (Bender's and Ehret's) and prefers the former because it is more secure and is based in more reliable data. For example, Bender points that there is a set of phonemes including implosives /*ɓ, *ɗ, *ʄ, *ɠ/, ejectives /*pʼ, *tʼ, (*sʼ), *cʼ, *kʼ/ and prenasal constants /*mb, *nd, (*nt), *ñɟ, *ŋg/, but it seems that they can be reconstructed only for core groups (E, I, J, L) and the collateral group (C, D, F, G, H), but not for the Proto-Nilo-Saharan.

Christopher Ehret is another specialist in Nilo-Saharan that used a less clear methodology and proposed a maximalist phonemic system:

This maximalist system has been criticized by Bender and Blench. These authors state that the correspondences used by Ehret are not very clear, and because of this many of the sounds in the table may only be allphonic variations.[citation needed]