Nimrod is a long-range air-to-surface and surface-to-surface missile developed by Israel Aerospace Industries. While primarily designed for anti-tank use, it provides standoff strike capability against a variety of point targets such as APCs, ships, bunkers, personnel concentrations and guerrillas.

Nimrod has a semi-active laser guidance system, capable of day and night operation. Its flight trajectory can be set below obscuring cloud layers, while a forward scouting team uses a laser designator to direct it from up to 26 km behind.

Nimrod may be installed on a variety of towed launchers, light combat vehicle launchers, helicopters, and fixed-wing aircraft. The primary helicopter launch platform for the Nimrod in the Israel Defense Forces is a modified CH-53 helicopter; this is not only due to the relatively large size and weight of the Nimrod missile, but because the CH-53 is a common delivery vehicle for Israeli special operations teams. The launching vehicle or aircraft may fire up to 4 Nimrods at once from a single pack.

Nimrod is transonic in operation and is powered all the way to the target. The gunner preselects the flight trajectory mode. This can be direct trajectory, high cruising trajectory or low cruising trajectory, the cruising altitude being constant and between 300 and 1,500 m. Mid-course guidance is provided by an integral inertial platform, and terminal guidance by a semi-active laser homing seeker for the last 15 to 30 seconds of missile flight. The target can be illuminated either by a ground-based or airborne laser designator.

The gimballed and stabilised seeker head acquires, tracks and homes in on its target using localised proportional navigation. It is said to have a look angle of more than 30°. The seeker has a search area of 5 km in width and 5 km in depth. In the terminal flight phase the weapon adopts a dive angle of approximately 45° to strike the armoured target on its vulnerable upper surfaces.

The missile is stored in a sealed canister which also acts as the launcher. Total weight of the missile and canister is 150 kg. It has five main sections: seeker, guidance and control, warhead, solid propellant rocket motor and servo. It is roll-stabilised in flight. Time to come into action at a launch site is less than 3 minutes without the site having to be surveyed for alignment or levelling, or with a direct line of sight to the target. The weapon can be fired in single-round, ripple or salvo modes.

In addition to the AMX-13 light tank tracked chassis application mentioned below there is also a truck (4 x 4) model with a pod of four missiles in the ready to launch position at the rear, firing over the cab. Modified AMX-13 light tank chassis (two eight-round container-launcher installations - unknown export customer).

Production of Nimrod is complete. It is in service with an unidentified export customer. Recent information has indicated that Nimrod may be in service with the Israel Defense Forces with target acquisition being carried out by special forces. 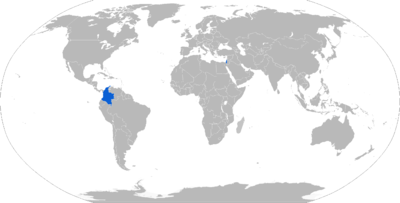 Map with Nimrod operators in blue