From Infogalactic: the planetary knowledge core
Jump to: navigation, search
"No3" redirects here. For the number, see 3 (number).
For nitrates in medicine, see Nitrovasodilator. For the ion with chemical formula NO2−, see nitrite.

Nitrate is a polyatomic ion with the molecular formula NO3− and a molecular mass of 62.0049 g/mol. Nitrates also describe the organic functional group RONO2 . These nitrate esters are a specialized class of explosives.

The nitrate ion. The net charge of the whole ion is 1−.

The anion is the conjugate base of nitric acid, consisting of one central nitrogen atom surrounded by three identically bonded oxygen atoms in a trigonal planar arrangement. The nitrate ion carries a formal charge of -1. This results from a combination formal charge in which each of the three oxygens carries a −​2⁄3 charge, whereas the nitrogen carries a 1+ charge, all these adding up to formal charge of the polyatomic nitrate ion. This arrangement is commonly used as an example of resonance. Like the isoelectronic carbonate ion, the nitrate ion can be represented by resonance structures:

The nitrate ion with the partial charges shown

It is now believed that dietary nitrate in the form of plant-based foods is converted in the body to nitrite. Most nitrite ingestion in the U.S. diet is from conversion of nitrate in plants, not from nitrite intake from cured meats.[1] Nitrite and water are converted to nitric oxide which reduces hypertension. Anti-hypertensive diets, such as the DASH diet, typically elevates nitric oxide levels which is first reduced to nitrite in the saliva, as detected in saliva testing, prior to forming nitric oxide.

Nitrate salts are found naturally on earth as large deposits, particularly of Nitratine, a major source of sodium nitrate.

Nitrites are produced by a number of species of nitrifying bacteria, and the nitrate compounds for gunpowder (see this topic for more) were historically produced, in the absence of mineral nitrate sources, by means of various fermentation processes using urine and dung. Nitrates are found in man-made fertilizers. As a byproduct of lightning strikes in earth's nitrogen-oxygen rich atmosphere, nitric acid is produced when nitrogen dioxide reacts with water vapor.

Table tennis balls are made from celluloid, an organic nitrate.

Nitrates are mainly produced for use as fertilizers in agriculture because of their high solubility and biodegradability. The main nitrate fertilizers are ammonium, sodium, potassium, and calcium salts. Several million kilograms are produced annually for this purpose.[2]

The second major application of nitrates is as oxidizing agents, most notably in explosives where the rapid oxidation of carbon compounds liberates large volumes of gases (see Gunpowder for an example). Sodium nitrate is used to remove air bubbles from molten glass and some ceramics. Mixtures of the molten salt are used to harden some metals. Explosives and table tennis balls are made from celluloid.

A minor use in meat curing: Although nitrites are the nitrogen compound chiefly used in meat curing, nitrates are used in certain specialty curing processes where a long release of nitrite from parent nitrate stores is needed. The use of nitrates in food preservation is controversial. This is due to the potential for the formation of nitrosamines when nitrates are present in high concentrations and the product is cooked at high temperatures.[3] The effect is seen for red or processed meat, but not for white meat or fish.[4][5] The production of carcinogenic nitrosamines can be potently inhibited by the use of the antioxidants Vitamin C and the alpha-tocopherol form of Vitamin E during curing.[6] Under simulated gastric conditions, nitrosothiols rather than nitrosamines are the main nitroso species being formed.[4] The usage of either compound is therefore regulated; for example, in the United States, the concentration of nitrates and nitrites is generally limited to 200 ppm or lower.[3] They are considered irreplaceable in the prevention of botulinum poisoning from consumption of cured dry sausages by preventing spore germination.[7]

The historical standard method of testing for nitrate is the Cadmium Reduction Method, which is reliable and accurate although it is dependent on a toxic metal cadmium and thus not suitable for all applications. An alternative method for nitrate and nitrite analysis is enzymatic reduction using nitrate reductase,[8][9][10] which has recently been proposed by the US Environmental Protection Agency as an alternate test procedure for determining nitrate.[11] An open source photometer as been developed for this method to accurately detect nitrate in water, soils, forage, etc.[12] According to Hackaday this device can be built for US$65 to use this method to quantify nitrate accurately.[13]

Nitrate toxicosis can occur through enterohepatic metabolism of nitrate due to nitrite being an intermediate.[14] Nitrites oxidize the iron atoms in hemoglobin from ferrous iron (2+) to ferric iron (3+), rendering it unable to carry oxygen.[15] This process can lead to generalized lack of oxygen in organ tissue and a dangerous condition called methemoglobinemia. Although nitrite converts to ammonia, if there is more nitrite than can be converted, the animal slowly suffers from a lack of oxygen.[16]

Humans are subject to nitrate toxicity, with infants being especially vulnerable to methemoglobinemia due to nitrate metabolizing triglycerides present at higher concentrations than at other stages of development. Methemoglobinemia in infants is known as blue baby syndrome. Although nitrates in drinking water were once thought to be a contributing factor, there are now significant scientific doubts as to whether there is a causal link.[17][18] Blue baby syndrome is now thought to be the product of a number of factors, which can include any factor that causes gastric upset, such as diarrhoeal infection, protein intolerance, heavy metal toxicity etc., with nitrates playing a minor role. Nitrates, if a factor in a specific case, would most often be ingested by infants in high nitrate drinking water. However, nitrate exposure may also occur if eating, for instance, vegetables containing high levels of nitrate. Lettuce may contain elevated nitrate under growth conditions such as reduced sunlight, undersupply of the essential micronutrients molybdenum (Mo) and iron (Fe), or high concentrations of nitrate due to reduced assimilation of nitrate in the plant. High levels of nitrate fertilization also contribute to elevated levels of nitrate in the harvested plant.[19]

Some adults can be more susceptible to the effects of nitrates than others. The methemoglobin reductase enzyme may be under-produced or absent in certain people that have an inherited mutation.[20] Such individuals cannot break down methemoglobin as rapidly as those that do have the enzyme, leading to increased circulating levels of methemoglobin (the implication being that their blood is not as oxygen-rich). Those with insufficient stomach acid[20] (including some vegetarians and vegans) may also be at risk. It is the increased consumption of green, leafy vegetables that typically accompany these types of diets may lead to increased nitrate intake. A wide variety of medical conditions, including food allergies, asthma,[21] hepatitis, and gallstones may be linked with low stomach acid; these individuals may also be highly sensitive to the effects of nitrate.

Methemoglobinemia can be treated with methylene blue, which reduces ferric iron (3+) in affected blood cells back to ferrous iron (2+).[22] 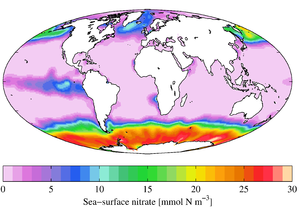 In freshwater or estuarine systems close to land, nitrate can reach high levels that can potentially cause the death of fish. While nitrate is much less toxic than ammonia,[23] levels over 30 ppm of nitrate can inhibit growth, impair the immune system and cause stress in some aquatic species.[24] However, in light of inherent problems with past protocols on acute nitrate toxicity experiments, the extent of nitrate toxicity has been the subject of recent debate.[25]

In most cases of excess nitrate concentrations in aquatic systems, the primary source is surface runoff from agricultural or landscaped areas that have received excess nitrate fertilizer. This is called eutrophication and can lead to algae blooms. As well as leading to water anoxia and dead zones, these blooms may cause other changes to ecosystem function, favouring some groups of organisms over others. As a consequence, as nitrate forms a component of total dissolved solids, they are widely used as an indicator of water quality.

Symptoms of nitrate poisoning include increased heart rate and respiration; in advanced cases blood and tissue may turn a blue or brown color. Feed can be tested for nitrate; treatment consists of supplementing or substituting existing supplies with lower nitrate material. Safe levels of nitrate for various types of livestock are as follows:[26]

The values above are on a dry (moisture free) basis.

Nitrate formation with elements of the periodic table.