The Nixon Doctrine (also known as the Guam Doctrine) was put forth during a press conference in Guam on July 25, 1969 by U.S. President Richard Nixon[1] and later formalized in his speech on Vietnamization on November 3, 1969.[2] According to Gregg Brazinsky,[3] Nixon stated that "the United States would assist in the defense and developments of allies and friends," but would not "undertake all the defense of the free nations of the world." This doctrine meant that each ally nation was in charge of its own security in general, but the United States would act as a nuclear umbrella when requested. The Doctrine argued for the pursuit of peace through a partnership with American allies. The Nixon Doctrine implied the intentions of Richard Nixon shifting the direction on international policies in Asia, especially aiming for "Vietnamization of the Vietnam War." 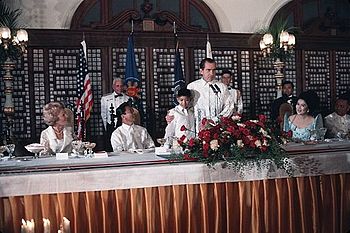 When Richard Nixon became the President of the United States in 1969, the US had been engaged in combat in Vietnam for almost four years. It had so far resulted in the loss of more than 30,000 American and countless Vietnamese lives.[4] By 1969 US public opinion had moved decisively in favour of an end to the Vietnam War;[5] A Gallup poll in May showed 56% of the public believed sending troops to Vietnam was a mistake. Of those over 50 years old, 61% expressed that belief, compared to 49% of those between 21 and 29 years old, even if tacit abandonment of the SEATO Treaty was ultimately required, resulting in a complete communist takeover of South Vietnam despite previous US guarantees.[6] Because Nixon campaigned for "Peace with Honor" in relation to Vietnam during the 1968 presidential campaign ending the Vietnam War became an important policy goal for Nixon.

During a stopover at Guam in middle of an international tour, Nixon formally announced the Doctrine.[7]

US retreat from unconditional defense guarantees to lesser allies in general was driven as much by financial concerns[9] as by policy re-examination of strategic and foreign policy objectives, reflected in Nixon's goals of detente and nuclear arms control with the Soviet Union, and establishment of formal diplomatic relations with the People's Republic of China. As a consequence of this shift, direct sales of weaponry[10] to nations no longer under the nuclear umbrella of previous US security guarantees dramatically increased as US guarantees were withdrawn. In South Korea 20,000 of the 61,000 US troops stationed there were withdrawn by June 1971.

According to author Michael Klare,[11] application of the Nixon Doctrine "opened the floodgates" of U.S. military aid to allies in the Persian Gulf, and helped set the stage for the Carter Doctrine and for the subsequent direct U.S. military involvement of the Gulf War and the Iraq War. The US turned to Saudi Arabia and Iran as "twin pillars" of regional stability.[12] Oil price increases in 1970 and 1971 would allow to fund both states with this military expansion. Total arms transfers from the United States to Iran increased from $103.6 million in 1970 to $552.7 million in 1972; those to Saudi Arabia increased from $15.8 million in 1970 to $312.4 million in 1972. The United States would maintain its small naval force of three ships in the Gulf, stationed since World War II in Bahrain, but would take on no other formal security commitments.[13]

Scholar Walter Ladwig has recently argued that the United States should adopt a "neo-Nixon doctrine" towards the Indian Ocean region, in which the US would sponsor key local partners—India, Indonesia, Australia and South Africa—to assume the primary burden for upholding regional peace and security. A key shortcoming of the original Nixon Doctrine, Ladwig argues, was its reliance on pro-Western autocrats who proved to be a poor foundation for an enduring regional security structure. In contrast, his "neo-Nixon Doctrine" would focus on cultivating the major Indian Ocean nations that are democratic and financially capable of being net providers of security in the region.[14] Although crediting this idea for the "reasonable balance it strikes between US leadership and local initiative," Andrew Philips of the Australian Strategic Policy Institute has suggested the idea overstates "the degree of convergent security interests between its four presumptive sub-regional lynchpin states."[15]