From Infogalactic: the planetary knowledge core
Jump to: navigation, search
For the Mughal ruler of Hyderabad, see Nizam of Hyderabad.

Abu Ali Hasan ibn Ali Tusi (April 10, 1018 – October 14, 1092), better known by his honorific title of Nizam al-Mulk (Persian: نظام‌الملک‎‎, "Order of the Realm") was a Persian[2][3] scholar and vizier of the Seljuq Empire. He held near absolute power for 20 years after the assassination of Alp Arslan in 1072.[4] One of his most important legacies was founding madrasas in cities throughout the Persian Empire. These were called "nezamiyehs" after him.[5]

Early life and service to the Ghaznavids

Abu Ali Hasan was born on April 10, 1018 in a small village named Radkan, near Tus, in Iran, to a dehqan family.[6][7][8][9] His father Ali ibn Ishak served as a financial officer to the Ghaznavids.[10] However, when the Seljuq Turks defeated the Ghaznavids at the Battle of Dandanaqan in 1040, and conquered Khorasan, Abu Ali Hasan's father fled to Ghazni, where Abu Ali Hasan was working within the government, and spent three years working there until he left the city.[11]

Service to the Seljuqs

Reign of Tughril and Alp Arslan

Around the year of 1043, Abu Ali Hasan stopped serving the Ghaznavids and entered the service of the Seljuq Turks. He later became chief administrator of the entire Khorasan province by 1059.[11] When Tughril died childless in the city of Ray, he was succeeded by his nephew Suleiman which was contested by Alp Arslan, both of them sons of his brother Chaghri. His cousin Kutalmish who had both been a vital part of his campaigns and later a supporter of Yinal's rebellion also put forth a claim. Alp Arslan, with the aid of Abu Ali Hasan, defeated Kutalmish and succeeded him on April 27, 1064.

After Alp Arslan had consolidated his power in the Sejluq realm, he appointed Abu Ali Hasan as his vizier who would remain in that position throughout the reigns of Alp Arslan (1063–1072) and Malik Shah I (1072–1092). Abu Ali Hasan was also given the title of "Nizam al-Mulk" ("Order of the Realm").

Alp Arslan's strength lay in the military realm. Domestic affairs were handled by Nizam al-Mulk, who also founded of the administrative organization that characterized and strengthened the sultanate during the reigns of Alp Arslan and his son, Malik Shah I. Military fiefs, governed by Seljuq princes, were established to provide support for the soldiery and to accommodate the nomadic Turks to the established Anatolian agricultural scene. This type of military fiefdom enabled the nomadic Turks to draw on the resources of the sedentary Iranians, Turks, and other established cultures within the Seljuq realm, and allowed Alp Arslan to field a huge standing army without depending on tribute from conquest to pay his soldiers. He not only had enough food from his subjects to maintain his military, but the taxes collected from traders and merchants added to his coffers sufficiently to fund his continuous wars.

Nizam accompanied Alp Arslan in all his campaigns and journeys, except a few. On February/March 1064 Alp Arslan, along with his son Malik Shah I and Nizam al-Mulk, campaigned in Byzantine Armenia, where they managed to capture Ani. Several minor rulers then acknowledged Seljuq authority, while Alp Arslan and Nizam continued to penetrate deeper into Caucasus, reaching Georgia. The Georgian ruler Bagrat IV, managed to make peace with Alp Arslan by giving his niece to him in marriage.[12]

Nizam also made some expeditions on his own and conquered the citadel of Estakhr from the Shabankara chieftain Fadluya in 1067, and made another expedition in Fars. These successful conquests are said to have greatly increased his reputation.[11] On August 26 of 1071, the decisive battle of Manzikert was fought, which Nizam al-Mulk was not present because he had been sent to Persia with a convoy of materials.

Reign of Malik Shah I

Coin minted during the reign of Malik-Shah I.

Following Alp Arslan's assassination in 1072, Malik Shah I was challenged in battle by his uncle, Kavurt. In January 1074, their armies met near Hamadan. Kavurt's troops consisted of the traditional Turkmen elements from Alp Arslan's army, while Malik's consisted of ghulams and contingents of Kurdish and Arab troops. Due to Turkmen defections to Malik's army, Kavurt was defeated and, despite Malik's consideration for mercy, later poisoned, presumably on the orders of Nizam al-Mulk.[13]

Under Nizam's excellent guidance the Seljuq armies contained the Ghaznavids in Khorasan, rolled back the Fatimids in Syria, defeated other Seljuq pretenders to the throne, invaded Georgia and reduced it to a tributary state, compelled the submission of regional governors, and kept the Abassid Caliphs in a position of impotence.[14]

Nizam al-Mulk left a great mark on organization of the Seljuq governmental bodies and hence the title Nizam al-Mulk which translates as "Order of the Realm." He bridged political gaps among the Abbasids, the Seljuqs, and their various rivals such as the Fatimids. The Seljuq military was heavily mixed of different ethnicity, including Turks, Armenians, Greeks, Arabs, and Slavs. Nizam, however, favored Iranian soldiers, such as the Dailamites, Khorasanis, and the Shabankara Kurds. He also favored non-Iranian soldiers such as the Georgians.[15]

In 1081/1082, Ibn Bahmanyar, one of the many enemies of Nizam, tried to poison him, but failed and was blinded by Nizam. After the blinding of Ibn Bahmanyar, the enemies of Nizam made false stories about him and his son. This greatly angered Nizam's son Jamal al-Mulk, who tore out the tongue of Ja'farak, one of the perpetrators of the false stories. Malik Shah had no power to intervene in the event, but instead had Jamal poisoned.[15]

In 1091, a group of Qarmatians sacked Basra, while the Ismailis under the leadership of Hassan-i Sabbah seized the fortress of Alamut. Moreover, the succession to the sultanate was complicated by the death of two of Malik Shah's eldest sons: Dawud (died 1082) and Ahmad (died 1088), whom both were sons of the Kara-Khanid Princess Tarkan Khatun, she also had a son named Mahmud (born 1087) whom she wanted to succeed his father, while Nizam and most of the Seljuq army was in favor of Barkiyaruq,[15] the oldest of all Malik Shah's living sons and born to a Seljuq princess. Turkan Khatun then allied with Taj al-Mulk Abu'l Ghana'im to try to remove Nizam from his post. Taj even accused Nizam of corruption before the sultan. Malik Shah I, however, did not dare to dismiss Nizam.[10] Nizam later besieged Alamut, but was forced to withdraw.

In 1092, Nizam, just before his death, knowing that his enemies were planning plots against him, made a famous speech at the court:

Aside from his extraordinary influence as vizier with full authority, he is also well known for systematically founding a number of schools of higher education in several cities like Baghdad, Isfahan, Nishapur, Mosul, Basra, and Herat, the famous Nizamiyyah schools, which were named after him. In many aspects, these schools turned out to be the predecessors and models of universities that were established in Europe.

Nizam al-Mulk is also widely known for his voluminous treatise on kingship titled Siyasatnama (The Book of Government) which was written after Malik Shah had requested that his ministers produce books on government, administration and the troubles facing the nation. However, the treatise made by Nizam was the only one to receive approval and was consequently accepted as forming "the law of the constitution of the nation".[16]

He also wrote a book titled Dastur al-Wuzarā, written for his son Abulfath Fakhr al-Malik, which is not dissimilar to the famous book of Qabus nama. 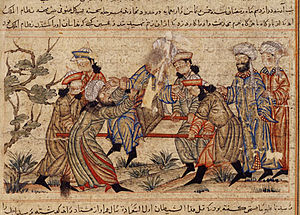 Nizam al-Mulk was assassinated en route from Isfahan to Baghdad on 10 Ramadan 485 A.H. (14 October 1092) The mainstream literature says he was stabbed by the dagger of a member of the Assassins (Hashshashin) sent by the notorious Hassan-i-Sabbah near Nahavand, as he was being carried on his litter. The killer approached him disguised as a dervish.[17]

This account is particularly interesting in light of a possibly apocryphal story recounted by Jorge Luis Borges. In this story a pact is formed between a young Nizam al-Mulk (at that time known as Abdul Khassem) and his two friends, Omar Khayyam and Hassan-i-Sabbah. Their agreement stated that if one should rise to prominence, that they would help the other two to do likewise. Nizam al-Mulk was the first to do this when he was appointed vizier to the sultan Alp Arslan. To fulfil the pact he offered both friends positions of rank within the court. Omar refused the offer, asking instead to be given the means to continue his studies indefinitely. This Nizam did, as well as building him an observatory. Although Hassan, unlike Omar, decided to accept the appointment offered to him, he was forced to flee after plotting to dispose Nizam as vizier. Subsequently, Hassan came upon and conquered the fortress of Alamut, from where he established the Assassins.

Another report says he was killed in secret by Malik Shah I in an internal power struggle. Consequently, his murder was avenged by the vizier's loyal academics of the Nizamiyyah, by assassinating the Sultan.[18] The account is disputed and remains a controversy because of the long history of friendship between Malik Shah I and Nizam.

Another report says that he was assassinated with Malik Shah I in the same year, after a debate between Sunni and Shi'a scholars which was prepared by him by the orders of Malik Shah I and which resulted in converting him and the king to the Shi'a ideology.[19] The story is reported by the son-in-law of Nizam al-Mulk, Mughatil ibn Bakri who attended the debate.

Nizam al-Mulk was an excellent and clever vizier, he represented the majesty, splendor and hospitality of the Barmakids, historians and poets describe him as a great organizer and an ideal soldier and scholar.[20] Only thanks to him it was possible for the Seljuq Turks to establish a powerful empire in their new home.[21] Nizam was not only the leader of the Persian-dominated bureaucratic (divan), but was also an Atabeg who served in the royal court (dadgar) and played an important role between the politically and culturally differences of the Iranians and Turks. He was also responsible for establishing distinctly Persian forms of government and administration which would last for centuries.[22] Because of his excellent tutorship and close friendship with Malik Shah, he was usually called "father" by him.[11] He was even greatly respected by his ghulams, who, after the death of Nizam, took revenge on several of his rivals, such as Taj al-Mulk.[11]