No. 12 Squadron of the Royal Air Force operates the Tornado GR4 from RAF Marham, having been reformed on 9 January 2015.

No. 12 Squadron Royal Flying Corps was formed in February 1915 from a flight of No. 1 Squadron RFC at Netheravon. The squadron moved to France in September 1915 and operated a variety of aircraft on operations over the Western Front. In March 1918 the squadron was re-equipped with the Bristol F2b Fighter just before the squadron became part of the newly formed Royal Air Force. The squadron then based at Bickendorf in Germany was disbanded in 1922.

The squadron reformed at RAF Northolt on 1 April 1923 to operate the de Havilland DH.9A. In 1924 it moved to RAF Andover and converted to the Fairey Fawn a single-engined biplane bomber. The Fawns were replaced in 1926 with the Fairey Fox, which influenced the adoption of the fox's head as part of the squadron badge.This is because No 12 Squadron was the only RAF user of the Fairey Fox and its performance was superior to other types i.e. it led the field. In 1931 the squadron re-equipped with the Sydney Camm designed Hawker Hart. In October 1935 the squadron moved to the Middle East, but returned to Andover in August 1936. The Harts were replaced by the Hawker Hind in 1936 and in 1938 the squadron was equipped with Fairey Battles. 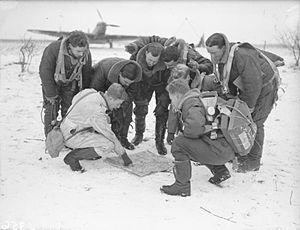 Fairey Battle crews of No. 12 Squadron RAF check their maps on the snow-covered airfield at Amifontaine (c. 1939-40).

On the first day of the Second World War the squadron moved to France to begin operations. On 12 May 1940, over the Albert Canal, Belgium, one bridge in particular was being used by the invading German army, with protection from fighter aircraft, anti-aircraft and machine-guns. The RAF was ordered to demolish this vital bridge, and five Fairey Battles from the squadron were dispatched. They met an inferno of anti-aircraft fire, but the mission was accomplished, much of the success being due to the coolness and resource of the pilot Flying Officer Garland of the leading aircraft and the navigation of Sergeant Gray. Unfortunately the leading aircraft and three others did not return. Flying Officer Garland and Sergeant Gray were both posthumously awarded the Victoria Cross.

The squadron returned to England in June. It was stationed initially at RAF Finningley, arriving at RAF Binbrook on July 1940 when it was refurnished with Battles. Amongst other missions, it carried out anti-invasion strikes against shipping in Boulogne Harbour, most notably on 17 and 19 August. The Squadron was one of the last No.1 Group units to conduct operations with Fairey Battles. These took place on 15/16 October 1940, when No.301 (Polish) Squadron bombed Boulogne and Nos. 12 and 142 Squadrons bombed Calais. 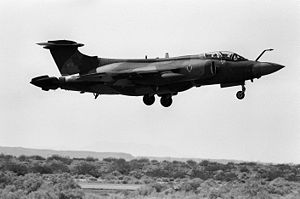 In 1962 the squadron was reformed to operate eight Avro Vulcan V bombers, initially from RAF Coningsby then RAF Cottesmore equipped with Yellow Sun one megaton free-fall strategic nuclear bombs for medium to high altitude release. The advent of effective Soviet SAMs made high-flying bombers vulnerable, and in late 1966 the squadron took delivery of eight WE.177B strategic nuclear laydown bombs for low-level penetration missions, and still based at Cottesmore were assigned to SACEUR as part of the UK strategic nuclear forces deployed with that 450 kt weapon, that was intended as a temporary stop-gap until the UK Polaris force began to take over the strategic nuclear delivery role.[1] The squadron stood down from this role at the end of 1967.[2][3]

File:RAF Tornados over Kuwait 1998.jpeg
Tornado GR4s fly below a Vickers VC-10 K3 tanker prior to refueling over Kuwait (1998).

No.12 squadron reformed at RAF Honington in October 1969 with 12 Buccaneer aircraft assigned to SACLANT in the anti-shipping role, equipped with 12 WE.177 nuclear bombs and free-falling conventional HE bombs,[4] and from 1974 with Martel missiles for non-nuclear strike. The squadron moved to RAF Lossiemouth in 1980, still in the same anti-shipping role.[5] In 1993 it was disbanded once more.

In September 1993, No. 27 Squadron RAF then at RAF Marham disbanded and immediately re-formed as No.12 Squadron operating twelve Tornado GR1 aircraft equipped with eighteen WE.177 nuclear weapons[6] and relocated to RAF Lossiemouth.

During December 1998, the Squadron took part in Operation Desert Fox, the four-day air campaign against Iraq. Deployments to the Gulf continued, flying the upgraded Tornado GR4 from 2001 and included major contributions in 2003 as part of Operation Telic as well as supporting the first free elections in Iraq for 50 years in January 2005. In 2006 and again in 2008 the Sqn provided armed overwatch for UK and US ground operations in Iraq. Shortly afterwards, as British troops withdrew from the country, the Tornado fleet based in the region also returned to the UK, marking the end of a long era of the aircraft in theatre.[7] 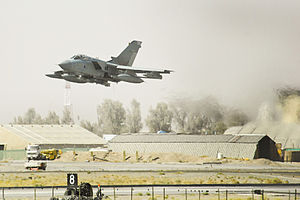 A 12 Squadron RAF Tornado GR4 takes off from Kandahar airfield in Afghanistan (2009).

In June 2009 the squadron deployed ten jets to Cyprus, eight of which continued to Kandahar in Afghanistan. This marked the start of Tornado GR4 operations in Afghanistan, with the type replacing the Harrier GR.9 in theatre. For over four months No. 12 Squadron successfully provided support to the International Security Assistance Force (ISAF), including close air support for, amongst others, British, American, Canadian and Afghan troops in all parts of the country. On 16 October 2009 12 Squadron returned to Lossiemouth after having handed over to a Marham-based GR4 squadron.

Between subsequent Operation Herrick deployments during 2011, 12(Bomber) Squadron was deployed in support Operation Ellamy, the UK’s participation in the military intervention in Libya under United Nations Security Council Resolution 1973. This saw ten aircrew deploy to Gioia del Colle to bolster the Tornado component during the peak of operations. The remainder of the Squadron was held at readiness to move to RAF Marham to launch Storm Shadow raids on hardened Libyan targets. These missions required three air-to-air refuelling brackets on the outward journey and one further on return to Gioia Del Colle.

No. 12 Squadron operated from RAF Lossiemouth and operated the Tornado GR4 in a variety of roles, from close air support and strike bombing to training missions that keep the Aircrew current in the latest tactics and methods as well as giving them the continued hands on experience with the vast and varied weapon systems that are available to them. No. 12 Squadron disbanded on 31 March 2014 under the command of Wing Commander Simon Strasdin.[8][9][10]

Having redeployed from Afghanistan as part of Operation Herrick, No. 2 Squadron RAF equipped with eight Tornado GR4's was deployed to RAF Akrotiri as part of Operation Shader, a coalition undertaking air strikes against the Islamic extremist group, ISIL in Iraq. Under the 2012 Strategic Defence Review, all Tornado aircraft were due to be withdrawn from RAF operations by end of 2015, and so No. 2 Squadron RAF was to stand down on 31 March 2015 as a Tornado squadron at RAF Marham, and reactivate the following day as a Typhoon squadron at RAF Lossiemouth.[11]

However, in October 2014, Prime Minister David Cameron said that No.2 Squadron's disbanding and reformation would be put on hold to allow the retention of Tornado's supporting strikes against ISIL. As a consequence of this new plan: the new No.2 Squadron formed at Lossiemouth on 12 January 2015; 12 Squadron reformed the same day at RAF Marham, taking over the former Tornado aircraft and assets of No.2.[12][13] The reformed squadron is commanded by Wing Commander Nikki Thomas, the first female RAF officer to command a fast jet squadron.[14]

In August 2015 Jane's reported that the squadron will stay active for a longer period.[15]