During the Second World War, No. 1435 Flight was a nightfighter unit on Malta subsequently raised to squadron status becoming the only RAF flying squadron to be given a four digit number.[3][4]

It converted to fighter-bomber activities in January 1943 and operated over Sicily and in Italy. It was assigned to the Balkan Air Force, carrying out operations over Albania and Yugoslavia until the end of the war. 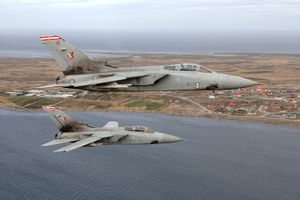 In November 1988, when 23 Squadron converted to the Tornado, 1435 Flight was revived, equipped with four McDonnell Douglas Phantom FGR.2s. After No. 23 Squadron's disbandment at RAF Mount Pleasant, the mission and equipment were transferred to No. 1435 Flight, flying the Panavia Tornado F.3 and later the Eurofighter Typhoon.

The aircraft are permanently based in the islands, while the aircrew from the UK are cycled through No. 1435 Flight. While there they provide a 365-day, 24 hour alert. The Flight has maintained its Maltese connections, with its aircraft sporting the Maltese cross. The practice of naming the four-aircraft presence on the islands has also been maintained: they are called Faith, Hope and Charity, after the legendary three Gloster Sea Gladiators that once defended Malta, and Desperation. Desperation was added to the three traditional names when Phantoms entered service in the Falklands and the flight was revived in 1988. Faith, Hope and Charity fly operationally, with Desperation appropriately in reserve. On their retirement in 1992, one of the Phantoms was placed as the gate guardian at Mount Pleasant. The Phantoms were replaced by four Tornado F.3s. The four Tornados remained in active service until they were replaced in their turn by four Eurofighter Typhoon FGR4 (Tranche 2) in September 2009.[8] Although the unit's new aircraft do not have the traditional names applied, the four aircraft have tailcodes that match (F, H, C, D).