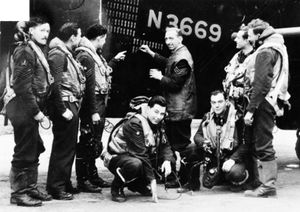 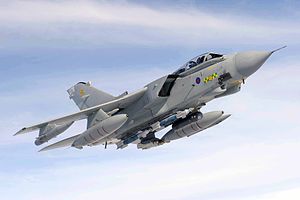 No. 15 Squadron was first formed at Farnborough Airfield on 1 March 1915 as a Royal Flying Corps training unit, commanded by Major Philip Joubert de la Ferté. It was mainly equipped with Royal Aircraft Factory B.E.2cs, supplemented with a few Bristol Scouts, and moved to France on 22 December 1915, undertaking a reconnaissance role in support of the Army. It operated in support of IV Corps during the Battle of the Somme in summer 1916, suffering heavy losses from both ground fire and German fighter aircraft. It was praised by Douglas Haig for its work in support of the Fifth Army in the Ancre salient in January 1917.[1]

It was again heavily committed to action in support of the offensive at Arras in Spring 1917. It re-equipped with the Royal Aircraft Factory R.E.8 in June 1917, retaining the "Harry Tate" (a rhyming-slang term for the aircraft) until the end of the First World War. It moved back to United Kingdom in February 1919, and was disbanded at Fowlmere on 31 December that year.[2]

One of the officers who began his career in the squadron during this era was future Air Marshal Sir Charles Steele.[3]

It reformed on 20 March 1924 at Martlesham Heath as part of the Aeroplane and Armament Experimental Establishment, mainly carrying out test flying of bomber aircraft.[4] No. 15 was again reformed in 1934 at RAF Abingdon as a light bomber squadron equipped with the Hawker Hart.[4] Its Commanding Officer of the day, Squadron Leader T W Elmhirst, DFC, instigated the squadron's tradition of writing its squadron number in Roman numerals.[5] It received Hawker Hinds as a temporary replacement for the Harts before re-equipping with Fairey Battle monoplanes in 1938.[4][6]

Still equipped with Fairey Battle light bombers, the squadron flew to France in September 1939 as part of No. 71 Wing, Advanced Air Striking Force. After returning to the UK, the following year it re-equipped first with Bristol Blenheims and again with Vickers Wellingtons before becoming one of the first Short Stirling bomber squadrons. One famous Stirling was donated by Lady MacRobert in memory of her three sons killed in RAF service and named MacRobert's Reply. In 1943, the squadron converted to Avro Lancasters.

In 1947, the Lancasters were replaced with Avro Lincolns, before the squadron adopted the nuclear strike role with Boeing Washingtons in 1951.

XV Squadron re-equipped with the English Electric Canberra B.2 bomber in June 1953, whilst at RAF Coningsby, Lincolnshire, later moving to RAF Cottesmore, Rutland and then to RAF Honington, Suffolk. The Canberra was used in combat in the Suez Crisis and dropped the most bombs in the eighteen day of conflict. The Squadron disbanded in July 1957.

On 1 September 1958 it was reformed as the second Handley Page Victor squadron, stationed at RAF Cottesmore. In 1962, it was one of the many squadrons ready for action during the Cuban Missile Crisis. Deploying to RAF Tengah in 1963, it was on hand as a show of force to deter Indonesia during the Indonesia-Malaysia Confrontation. Following this, it was disbanded on 31 October 1964 upon withdrawal from overseas detachment.

Service as a nuclear force

In 1970 the Squadron reformed with the Blackburn Buccaneer S.2B at RAF Honington, shortly afterwards moving to RAF Laarbruch in Germany. From 1971 their task at RAF Laarbruch, assigned to SACEUR, was the support of the army in a European land battle, first in a conventional role, and later in a tactical nuclear delivery role, if required. RAF planning staff expected the squadron's twelve Buccaneer S2B aircraft to suffer attrition of one third their strength, leaving sufficient survivors, with those held back in reserve from the conventional phase, to deliver the squadron's allocation of eighteen WE.177 nuclear bombs.[7][8]

In 1983 the squadron's twelve Buccaneer S2s were exchanged for twelve Tornado GR.1s, for use in a similar role from early 1984[9] The squadron subsequently became the first Panavia Tornado GR.1 Squadron in Germany. Tornados were able to carry two WE.177 nuclear bombs, and the RAF staff expected that there would be enough survivors of the conventional war phase to deliver an increased stock of eighteen bombs. The squadron's nuclear delivery role assigned to SACEUR continued at this strength until 1991, when it disbanded.

Deployed to Bahrain during the build-up to Operation Desert Storm, the Squadron was given the specific brief to knock out Iraqi Air Force bases by bombing the runways. On its second mission, an ultra-low-level daylight mission against Ar Rumaylah airfield with Squadron Leader Pablo Mason leading a flight of four Tornados, his number two crew of John Peters and navigator John Nichol were shot down and became POWs. Mason (along with many other RAF tornado crews) flew a total of 24 bombing missions in Desert Storm, from ultra-low-level daylight, medium-level night bombing and, on 2 February 1991, the first-ever Buccaneer/Tornado attack using laser-guided bombs.[10] During the conflict (14 February), another aircraft crewed by XV Squadron personnel was shot down, resulting in the loss of Flt Lt Stephen Hicks and the capture of Rupert Clark.

In 1992 No.45 (Reserve) Squadron, the Tornado Weapons Conversion Unit based at RAF Honington changed its "shadow" identity to No.15 (Reserve) Squadron, remaining at RAF Honington until 1993 assigned to SACEUR in the role it had performed when based at RAF Laarbruch. The squadron's equipment of twenty-six aircraft and thirty-nine WE.177 nuclear bombs was unusually large.[11][12] Relocation to RAF Lossiemouth in 1994 brought reassignment to SACLANT in the maritime strike role, armed with a variety of conventional weapons and eighteen WE.177 nuclear bombs.[13]