No. 310 Squadron RAF was a Czechoslovak-manned fighter squadron of the Royal Air Force during the Second World War.

It was first formed on 10 July 1940 at RAF Duxford, equipped with Hawker Hurricane I fighters and was the first RAF squadron to be raised crewed by foreign nationals, in this case escaped Czechoslovak pilots. Led by Squadron Leader Douglas Blackwood and using experienced pilots the squadron was operational in only a month and as part of 12 Group became involved in the Battle of Britain as part of the Duxford 'Big Wing'. 37.5 victories were claimed during the battle.

From 1941, the squadron began offensive operations flying sweeps over the English Channel and providing bomber escorts. It re-equipped with the Hurricane II in March 1941. In July 1941 the squadron moved to RAF Dyce, Scotland, to rest and then re-equip with the Supermarine Spitfire IIa and Vb on October 1941.

The squadron returned to defensive operations in December 1941 in Cornwall in the west of England. Another three-month rest period was required in June 1943 when the squadron moved back to Scotland.

In 1944, the squadron re-equipped with the Supermarine Spitfire IX and became a fighter-bomber unit with 134 Wing, flying ground attack duties during the Normandy landings. The squadron then spent the rest of the war flying armed reconnaissance missions along the Dutch and Belgian coasts. The final number was 52.5 claims with four V-1s shot down.

On 7 August 1945 the squadron moved to Hildesheim and then a few days later to Prague to form part of the new Czechoslovak Air Force. It officially disbanded as an RAF squadron on 15 February 1946. 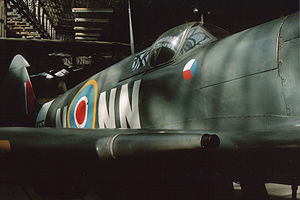