No. 32 (The Royal) Squadron (sometimes written as No. 32(TR) Squadron) of the Royal Air Force operates in the VIP and general air transport roles from RAF Northolt in Greater London.

Originally formed in 1916 as part of the Royal Flying Corps, the squadron saw action during the First and Second World Wars with fighter aircraft, but was disbanded in 1969. The Metropolitan Communications Squadron, involved in the VIP transport role, was renamed as No. 32 Squadron at that time. In 1995, the squadron was merged with the Queen's Flight and incorporated 'The Royal' title into its name. At this time the squadron moved from RAF Benson to RAF Northolt, where it remains.

The merger ended the RAF's provision of dedicated VIP transport aircraft; the aircraft of 32 Squadron are available to VIP passengers only if not needed for military operations. Two flights within the squadron operate the British Aerospace 146 and AgustaWestland AW109.

File:Royal Aircraft Factory SE5a.jpg
A lineup of S.E.5a aircraft belonging to 32 Squadron (the wartime censor has scratched out serial numbers on the negative—but left the much more revealing squadron markings)

No. 32 Squadron was formed as part of the Royal Flying Corps on 12 January 1916 at Netheravon and moved to France as a fighter squadron equipped with Airco DH.2s in May.[3] On 1 July 1916, its Commanding Officer, Major Lionel Rees was engaged in a combat with eight German Albatros two-seaters, and although wounded in the leg, managed to scatter the German aircraft, driving down two of the enemy, for which action he was awarded the Victoria Cross.[3]

The squadron continued to fly patrols over the Western Front, including over the Somme and Arras battlefields, for a year before beginning to re-equip with the Airco DH 5, specialising in ground attack missions. These in turn began to be replaced by the S.E.5a in December 1917 which were flown for the rest of the war on fighter and ground attack missions. On 1 April 1918 No. 32 became part of the new Royal Air Force. In March 1919, the squadron returned to the UK as a cadre and disbanded on 29 December 1919.[4] During the war just ended, sixteen aces had served in its ranks. They included: future Air Marshal Arthur Coningham DSO, MC, DFC; Walter Tyrrell, MC ; Arthur Claydon, DFC; John Donaldson, DSC, DFC, CdG; Wilfred Green, DFC, MM, CdG; Frank Hale, DFC; Hubert Jones, MC, AFC; William Curphey, MC; Maxmillian Mare-Montembault, MC; and George Lawson, DFC.

The squadron reformed on 1 April 1923 at Kenley as a single flight of Sopwith Snipe fighters. A second flight was formed on 10 December 1923 and a third brought the squadron up to strength on 1 June 1924. Gloster Grebes were received at the end of 1924 and were replaced by Gloster Gamecocks two years later. Equipped in succession with Armstrong Whitworth Siskins, Bristol Bulldogs and Gloster Gauntlets, No. 32 Squadron received the Hawker Hurricane in October 1938.

In May 1940, the squadron flew patrols over northern France and took part in the defence of south-east England based at RAF Biggin Hill during the opening weeks of the Battle of Britain before moving to northern England at the end of August 1940.[5] The Squadron's Hurricanes saw little action throughout 1941, but did attempt, unsuccessfully, to escort the Fairey Swordfish biplanes of 825 Naval Air Squadron during their doomed attempt to stop the German warships Scharnhorst, Gneisenau and Prinz Eugen during the Channel Dash on 12 February 1942,[6] and then carried out a number of night intruder operations before being deployed overseas.[7]

Following Operation Torch, the Anglo American invasion of North Africa, in December 1942, 32 Squadron deployed with its Hurricanes to Algeria, converting to the Supermarine Spitfire by July 1943.[6] Operations included a deployment to Greece, where the squadron took part in the Greek Civil War from September 1944 to February 1945.

After the end of the Second World War, the squadron continued as a fighter squadron, flying Spitfires, Vampires and Venoms from bases in Palestine, Cyprus, Egypt, Persian Gulf, Malta and Jordan. In January 1957, the squadron converted to Canberra bombers at RAF Weston Zoyland, flying these from Cyprus, remaining there until disbanding on 3 February 1969.

The squadron acquired four HS.125 CC.1s business jets in 1971. These would be supplemented and then replaced by two HS.125 CC.2s delivered in 1973 and six BAe 125 CC.3s delivered in 1982 and 1983. Six CC.3s remain in service. Aérospatiale Gazelle helicopters served with the squadron from 1976 onwards. These were replaced by initially two (later three) Twin Squirrels in 1996. 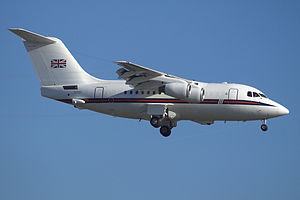 On 1 April 1995, the Queen's Flight, equipped with these BAe 146 CC.2 aircraft, and Wessex HCC.4 helicopters, was merged into No. 32 Squadron to become No. 32 (The Royal) Squadron and moved to RAF Northolt from RAF Benson.[10] Since then, 32 Squadron's aircraft have served as transports in several recent conflicts including Operation Granby (Gulf War), Operation Veritas (Afghanistan) and Operation Telic (Iraq 2003). The merged squadron continues to be referred to in the press and by the public (inaccurately) as the Royal Flight or the Queen's Flight. This merger ended the RAF's provision of dedicated VIP transport aircraft: the aircraft of No. 32 Squadron are available to VIP passengers only if not needed for military operations. This was declared officially in 1999, with the MOD stating: "the principal purpose of 32 Squadron [is] to provide communications and logistical support to military operations; the Squadron's capacity should be based on military needs only; and any royal or other non-military use of ... spare capacity is secondary to its military purpose".[11]

The squadron's aircraft flew with a distinctive red livery until it was replaced in 2004.

Following a review by the Ministry of Defence,[10] in 2004 the squadron's aircraft lost their distinctive livery inherited from The Queen's Flight, featuring red flying surfaces. This was due to the concern over the aircraft's vulnerability to terrorist attack. While they do carry missile countermeasures, it was felt that a more civilian-like livery lowered the profile of the squadron's aircraft.

In May 2005 the Defence Logistics Organisation's Helicopter and Islander Combined (HIC) Integrated Project Team (IPT) awarded AgustaWestland a five-year contract from 1 April 2006 to provide three AgustaWestland AW109Es to replace the three Twin Squirrels. This contract was extended on 31 March 2011 to allow two of the AW109Es to continue in use for a further year.[12] Two preserved examples of the squadron's ex-Queen's Flight Wessex helicopters can be seen at The Helicopter Museum in Weston-super-Mare and Royal Air Force Museum London.

Two additional BAe 146s were purchased in March 2012 from TNT Airways and were refitted by Hawker Beechcraft on behalf of BAE Systems for tactical freight and personnel transport use.[13][14] The aircraft, designated as the BAe 146 C Mk 3, arrived in Afghanistan in April 2013.[15]

On 16 March 2015, the squadron's final BAe 125 returned from operations in Afghanistan, heralding that types retirement from the RAF.[16] Of the final four operational aircraft, three were put up for sale by the Ministry of Defence,[17] and one was installed as a new gate guardian at RAF Northolt.[18] The aircraft were retired from service seven years ahead of their original withdrawal date.[19]