No 3 Squadron of the Royal Air Force operates the Typhoon F2, FGR4 and T3 from RAF Coningsby, Lincolnshire. It was formed in 1912 as one of the first squadrons of the Royal Flying Corps.

No 3 Squadron (Royal Flying Corps) was formed at Larkhill on 13 May 1912 by the renaming of No. 2 (Aeroplane)Company of the Air Battalion Royal Engineers, under the command of Major HRM Brooke-Popham. Being already equipped with aeroplanes and manned by pilots and air mechanics, No. 2 (Aeroplane)Company was thus the first British, Empire or Commonwealth independent military unit to operate heavier-than-air flying machines, hence the 3 Squadron motto Tertius primus erit, meaning "The third shall be the first". On 5 July 1912, two members of the squadron, Captain Eustace Loraine and Staff Sergeant Wilson were killed in an aircraft crash making them the first RFC fatalities.[1] In 1913, No 3 Squadron deployed to Halton in Buckinghamshire to support the land manoeuvres of the Household Division. A temporary airfield was set up on what later became RAF Halton's Maitland Parade Square. During the exercise, No 3 Squadron flew a number of reconnaissance sorties and staged the first confrontation between an airship and an aeroplane.[2]

Sent to France on the outbreak of the Great War (First World War), the squadron initially operated in the reconnaissance role using a variety of aircraft types. The English ace James McCudden served as a mechanic and later observer with 3 Squadron from June 1913 to January 1916 before leaving to become a pilot. Cecil Lewis, author of Sagittarius Rising flew Morane Parasols with No 3 Squadron during the Somme offensive in the summer of 1916. Later in October 1917, with the introduction of Sopwith Camels, a fighter/scout role was taken on, with 59 enemy aircraft being claimed by the end of the war. The squadron disbanded in October 1919.[3][4]

It reformed as a fighter squadron with Snipes in April 1924, operating a succession of different types, based in the UK, including the Gloster Gladiator.[7] The only highlight of these years was the 1935 deployment to the Sudan during the Italian invasion of Abyssinia.[4] 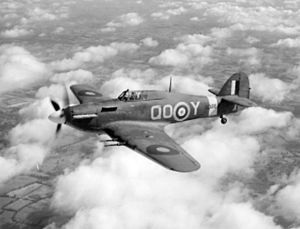 At the start of the Second World War No 3 Squadron was posted as part of Fighter Command to RAF Station Biggin Hill equipped with the Hawker Hurricane. It briefly deployed to France in support of the British Expeditionary Force following the German attack on the West in 1940, being forced to withdraw after 10 days, having claimed 60 German aircraft for the loss of 21 of its own. <06/41 to 08/41 No 3 Sqn moved from Martlesham Heath to RAF Stapleford Tawney operating 4 canon Hurricane 11s in 'Rhubarb' attacks on defended ground targets and shipping in northern France & Belgium. (Source Sqn logs National Record Office>. On 21 July 1940 "B" flight was detached to form the nucleus of the newly formed No. 232 Squadron. Once back up to strength, No. 3 Squadron was used as air defence for the Royal Naval base at Scapa Flow, remaining in Scotland until April 1941, based at RAF Station Wick in Northern Scotland.

The squadron then co-operated with "Turbinlite" searchlight equipped Douglas Havocs in the night fighter role.[4]

In February 1943 it re-equipped with the Hawker Typhoon for fighter-bomber and anti-shipping strikes. It re-equipped in March 1944 with the new Hawker Tempest fighter, operating over the Normandy beach-head and against German V1 flying bombs, claiming 288 V-1s shot down.[4]

It then deployed across the Channel, flying as part of the 2 TAF fighting through the low countries and into Germany. Amongst its pilots was F/L Pierre Clostermann, who flew with 3 Squadron from March 1945 until the end of the war in Europe.[3][4]

The squadron moved onto jets with the De Havilland Vampire during 1948, in Germany, where it had remained after moving there in the latter stages of the war. Sabres and Hunters replaced the Vampires during the 1950s, followed by Gloster Javelins and then a conversion onto Canberra bombers. Most of its time with Canberras was spent at RAF Geilenkirchen moving to RAF Laarbruch in January 1968.

3 Squadron's association with the Harrier began in the early 1970s with the Harrier GR1 at RAF Wildenrath where it reformed from Canberras to Harriers and they joined 4 & 20 Squadron equipped with Harrier GR1's who were already operational at RAF Wildenrath. The squadron received the later GR3 and GR5 model Harriers successively at RAF Gütersloh, finally receiving the GR7 and relocating to RAF Laarbruch in the 1992. In 1999, with the drawdown of the RAF in Germany, the squadron moved back to the UK along with its sister squadron No IV (AC) Squadron RAF. The two squadrons operated at RAF Cottesmore, being joined by the other Harrier operator, No. 1 Squadron RAF, in 2001. 3 Squadron moved to RAF Coningsby in 2006.

As part of Joint Force Harrier, 3 Squadron operated alongside the Fleet Air Arm Sea Harriers, and was capable of deployment from the Royal Navy aircraft carriers. Operations included Operation Allied Force over Kosovo in 1999, Operation Palliser over Sierra Leone in 2000 and Operation Telic over Iraq in 2003. In August 2004, it was announced that 6 Harriers would be deployed to Afghanistan in support of NATO forces.

Its Harrier GR7s were passed to the Fleet Air Arm to be used by the recommissioned No. 800 Naval Air Squadron when 3 Squadron re-equipped with the Eurofighter Typhoon. It became the first operational front line RAF Typhoon squadron on 31 March 2006 and was declared operational in 2007.

In May 2012 four aircraft were deployed to RAF Northolt in an air defence role covering the duration of the Olympic Games, the first time RAF fighters had been stationed at the base since the Second World War. 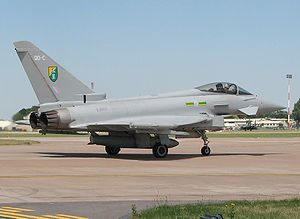