No. 48 Squadron was a Royal Air Force squadron that saw service in both the First and Second World Wars.

No. 48 Squadron of the Royal Flying Corps was formed at Netheravon, Wiltshire, on 15 April 1916. The squadron was posted to France in March 1917 and became the first fighter squadron to be equipped with the Bristol Fighter. One of the squadron's commanders was – then Major – Keith Park who later led No. 11 Group of Fighter Command during the Battle of Britain as an Air Vice Marshal. The squadron became part of the Royal Air Force when the Royal Flying Corps merged with the Royal Naval Air Service in 1918. It moved by sea to India during May/June 1919 being based at Quetta. On 1 April 1920 the squadron was disbanded by renumbering it to No. 5 Squadron.[1] 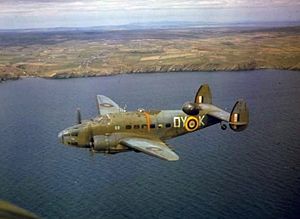 A 48 Squadron Hudson Mk V off the Scottish coastline, in early 1942.

The squadron reformed on 25 November 1935 at RAF Bicester, and became a General Reconnaissance unit operating Avro Anson aircraft. With the outbreak of war in 1939 the squadron was engaged in coastal patrols along the south coast of England. In 1941 the squadron re-equipped with Lockheed Hudson aircraft and took on the role of an anti-submarine squadron, patrolling first the North Sea and later in December 1942 the squadron moved RAF Gibraltar to patrol the Mediterranean.

In 1944 the squadron returned to the UK and was re-equipped with Douglas Dakota aircraft. It remained a transport squadron until being disbanded on 16 January 1946. During this period it operated from Chittagong, Bengal, India on supply operations in the Irawaddy Valley of Burma. 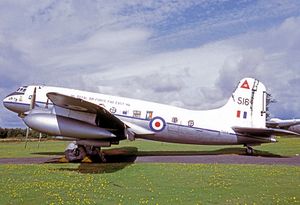 The squadron reformed again on 15 February 1946 when No. 215 Squadron was renumbered as No. 48. The base was at RAF Changi, Singapore, from April 1946 until October 1967. It was re-equipped with Vickers Valetta transports in January 1951 and these were replaced by Handley Page Hastings four-engine transport aircraft in June 1957. The squadron remained a transport unit for the remainder of its existence finally being equipped with the turboprop Lockheed C-130 Hercules. The squadron returned to the UK on 1 September 1971, continuing to operate the Hercules until disbandment at RAF Lyneham on 7 January 1976.[6]