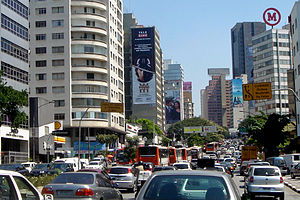 Traffic is the main source of noise pollution in cities. 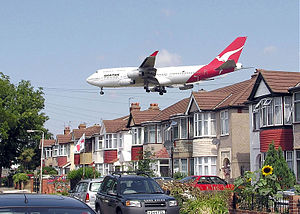 Noise pollution or noise disturbance is the disturbing or excessive noise that may harm the activity or balance of human or animal life. The source of most outdoor noise worldwide is mainly caused by machines and transportation systems, motor vehicles, aircraft, and trains.[1][2] Outdoor noise is summarized by the word environmental noise. Poor urban planning may give rise to noise pollution, since side-by-side industrial and residential buildings can result in noise pollution in the residential areas. Documented problems associated with urban noise go back as far as Ancient Rome.[3]

High noise levels can contribute to cardiovascular effects in humans and an increased incidence of coronary artery disease.[4] In animals, noise can increase the risk of death by altering predator or prey detection and avoidance, interfere with reproduction and navigation, and contribute to permanent hearing loss. [5]

Sound becomes unwanted when it either interferes with normal activities such as sleeping, conversation, or disrupts or diminishes one’s quality of life.[10]

Chronic exposure to noise may cause noise-induced hearing loss. Older males exposed to significant occupational noise demonstrate more significantly reduced hearing sensitivity than their non-exposed peers, though differences in hearing sensitivity decrease with time and the two groups are indistinguishable by age 79.[11] A comparison of Maaban tribesmen, who were insignificantly exposed to transportation or industrial noise, to a typical U.S. population showed that chronic exposure to moderately high levels of environmental noise contributes to hearing loss.[6]

High noise levels can contribute to cardiovascular effects and exposure to moderately high levels during a single eight-hour period causes a statistical rise in blood pressure of five to ten points and an increase in stress,[6] and vasoconstriction leading to the increased blood pressure noted above, as well as to increased incidence of coronary artery disease.

Noise can have a detrimental effect on wild animals, increasing the risk of death by changing the delicate balance in predator or prey detection and avoidance, and interfering the use of the sounds in communication, especially in relation to reproduction and in navigation. Acoustic overexposure can lead to temporary or permanent loss of hearing.

An impact of noise on wild animal life is the reduction of usable habitat that noisy areas may cause, which in the case of endangered species may be part of the path to extinction. Noise pollution may have caused the death of certain species of whales that beached themselves after being exposed to the loud sound of military sonar,[12] (see also Marine mammals and sonar).

Noise also makes species communicate more loudly, which is called Lombard vocal response.[13] Scientists and researchers have conducted experiments that show whales' song length is longer when submarine-detectors are on.[14] If creatures do not "speak" loudly enough, their voice will be masked by anthropogenic sounds. These unheard voices might be warnings, finding of prey, or preparations of net-bubbling. When one species begins speaking more loudly, it will mask other species' voice, causing the whole ecosystem eventually to speak more loudly.

Marine invertebrates, such as crabs (Carcinus maenas), have also been shown to be impacted by ship noise.[15][16] Larger crabs were noted to be impacted more by the sounds than smaller crabs. Repeated exposure to the sounds did lead to acclimatization.[16]

European robins living in urban environments are more likely to sing at night in places with high levels of noise pollution during the day, suggesting that they sing at night because it is quieter, and their message can propagate through the environment more clearly.[17] The same study showed that daytime noise was a stronger predictor of nocturnal singing than night-time light pollution, to which the phenomenon often is attributed.

Zebra finches become less faithful to their partners when exposed to traffic noise. This could alter a population's evolutionary trajectory by selecting traits, sapping resources normally devoted to other activities and thus leading to profound genetic and evolutionary consequences.[18] 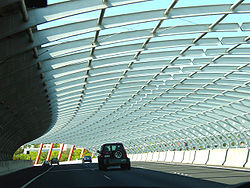 The sound tube in Melbourne, Australia is designed to reduce roadway noise without detracting from the area's aesthetics 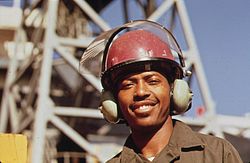 Roadway noise can be reduced by the use of noise barriers, limitation of vehicle speeds, alteration of roadway surface texture, limitation of heavy vehicles, use of traffic controls that smooth vehicle flow to reduce braking and acceleration, and tire design. An important factor in applying these strategies is a computer model for roadway noise, that is capable of addressing local topography, meteorology, traffic operations, and hypothetical mitigation. Costs of building-in mitigation can be modest, provided these solutions are sought in the planning stage of a roadway project.

Aircraft noise can be reduced by using quieter jet engines. Altering flight paths and time of day runway has benefitted residents near airports.

Industrial noise has been addressed since the 1930s via redesign of industrial equipment, shock mounted assemblies and physical barriers in the workplace. In recent years, Buy Quiet programs and initiatives have arisen in an effort to combat occupational noise exposures. These programs promote the purchase of quieter tools and equipment and encourage manufacturers to design quieter equipment.[19] The National Institute for Occupational Health has created a database of industrial equipment with decibel levels noted.[20]

Up until the 1970s governments tended to view noise as a "nuisance" rather than an environmental problem.

Many conflicts over noise pollution are handled by negotiation between the emitter and the receiver. Escalation procedures vary by country, and may include action in conjunction with local authorities, in particular the police.

Noise pollution is a major problem in India. The government of India has rules & regulations against firecrackers and loudspeakers, but enforcement is extremely lax.[21] Awaaz Foundation is an Indian NGO working to control noise pollution from various sources through advocacy, public interest litigation, awareness, and educational campaigns since 2003.[22]

Figures compiled by rockwool, the mineral wool insulation manufacturer, based on responses from local authorities to a Freedom of Information Act (FOI) request reveal in the period April 2008 – 2009 UK councils received 315,838 complaints about noise pollution from private residences. This resulted in environmental health officers across the UK serving 8,069 noise abatement notices or citations under the terms of the Anti-Social Behaviour (Scotland) Act. In the last 12 months, 524 confiscations of equipment have been authorized involving the removal of powerful speakers, stereos and televisions. Westminster City Council has received more complaints per head of population than any other district in the UK with 9,814 grievances about noise, which equates to 42.32 complaints per thousand residents. Eight of the top 10 councils ranked by complaints per 1,000 residents are located in London.[23]

There are federal standards for highway and aircraft noise; states and local governments typically have very specific statutes on building codes, urban planning, and roadway development.

Noise laws and ordinances vary widely among municipalities and indeed do not even exist in some cities. An ordinance may contain a general prohibition against making noise that is a nuisance, or it may set out specific guidelines for the level of noise allowable at certain times of the day and for certain activities.

The Environmental Protection Agency retains authority to investigate and study noise and its effect, disseminate information to the public regarding noise pollution and its adverse health effects, respond to inquiries on matters related to noise, and evaluate the effectiveness of existing regulations for protecting the public health and welfare, pursuant to the Noise Control Act of 1972 and the Quiet Communities Act of 1978.[24]

New York City instituted the first comprehensive noise code in 1985. The Portland Noise Code includes potential fines of up to $5000 per infraction and is the basis for other major U.S. and Canadian city noise ordinances.[25]