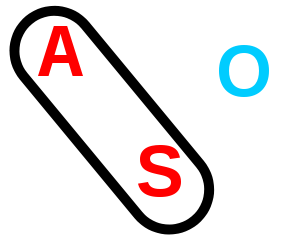 Nominative–accusative is a form of morphosyntactic alignment in which subjects of transitive and intransitive verbs are distinguished from objects of transitive verbs through word order, case marking, and/or verb agreement. Nominative–accusative alignment can be realized through morphology, by visible coding properties, and/or syntax, by behavioral properties during participation in specific constructions. This type of alignment has a broad global distribution and is one of the major alignment systems characterizing a critical portion of the world’s languages.

It is not uncommon for languages (such as Dyirbal and Hindi) to have overlapping alignment systems which exhibit both nominative–accusative and ergative–absolutive coding, a phenomenon called split ergativity. In fact, there are relatively few languages that exhibit only ergative–absolutive alignment (called pure ergativity). These languages tend to be localized to certain regions of the world such as the Caucasus, parts of North America and Mesoamerica, the Tibetan Plateau, and Australia. Such languages include Sumerian, Tibetan and Mayan.[1]

In a nominative–accusative language, accusativity can manifest itself in visible ways, called coding properties. Often, these visible properties are morphological and the distinction will appear as a difference in the actual morphological form and spelling of the word, or as case particles (pieces of morphology) which will appear before or after the word.

Not all arguments are equally likely to exhibit overt case marking. In fact, it is cross-linguistically not unusual to divide direct objects into two classes (with respect to overt case marking), a phenomenon called ‘differential object marking’ by Bossong (1985). A direct object that is higher in prominence is more likely to be overtly case-marked.[4]

This "prominence" is evaluated in the following ways:[4]

These scales are also reflected in Silverstein’s person/animacy hierarchy.[5]

In languages like Turkish, Kazakh language and Sakha, more "prominent" objects take an overt accusative marker while nonspecific ones do not. Lack of an overt case marker can restrict an object’s distribution in the sentence.[6] These orders are permitted in Sakha when accusative case is overtly expressed:

However, when the object is non-specific alternative ordering is not permitted: Sakha

a. кини яблоко сии-р-∅
a. kini yabloko sii-r-∅[6]
NOM apple eat
’S/he is eating some apple or other.’

When the direct object is low on the definiteness scale, it must directly precede the verb, whereas alternative ordering is possible when the direct object is higher in prominence. It is important to note that notions of prominence (animacy and definiteness) and the boundaries between one tier of prominence and another may vary from culture to culture. In German, for example, accusative case is always overt on arguments with masculine gender.

Case marking is one of the formal guises of DSM, along with agreement, inverse systems and voice alterations, which goes hand in hand with DSM. The use of case marking on subject is to differentiate prominence in arguments.[7] It can be used on subjects of transitive verbs and intransitive verbs. The definiteness and animacy scale of Differential Subject Marking has the same hierarchical structure exhibited in the section on Differential Object Marking. The functional motivation for the implementation of DSM and DOM is to avoid ambiguity as to what is subject and object in transitive clauses. The most natural hierarchy of animacy and definiteness places transitive subjects higher than transitive object.[7]

Some languages code very little through morphology and are more dependent on syntax to encode meaning and grammatical relationships. If a language relies less on overt case marking, alignment may be coded through word order, as in this example from Indonesian.

Alternatively, alignment can also manifest visibly through agreement on the verb. In the following example from Amharic, the verb is head-marked for both subject ‘3SG.M’ and object ‘3SG.M.O’.

Nominative–accusative alignment can also be distinguished through behavioral properties, in the way a nominative or accusative argument will behave when placed in particular syntactic constructions. This has to do with the impact of alignment on the level of the whole sentence rather than the individual word. Morphosyntactic alignment determines which arguments can be omitted in a coordinate structure during the process of conjunction reduction (deleting arguments from the ends of joined clauses). In nominative–accusative, only arguments S and A can be omitted and not argument O.

The omitted subject argument of the embedded clause must correspond to the subject (nominative) of the matrix-clause. If it corresponds to the object (accusative), the sentence is ungrammatical.

If English were an ergative–absolutive language, one would expect to see: 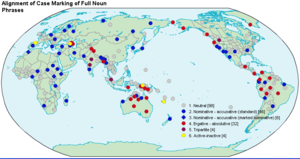 Distribution of languages by alignment type

When a two-place predicate R(x,y) is used to describe an event involving two participants, usually an agent and a patient, it is of utmost importance to avoid ambiguity as to which noun phrase corresponds to the first argument x (the agent) and which to the second argument y (the patient). For this purpose, case can be used to mark one of the arguments. If one argument is case marked, this already suffices for the purpose of disambiguation. Thus, from the distinguishing perspective, there is no need to case mark both arguments. Neither would it be necessary to case mark the one and only argument of a one-place (intransitive) predicate. Indeed, it has been argued that in many nominative–accusative case systems only the y is case marked (with accusative case) while the x remains morphologically unmarked.[9]

It is rare for case to serve only the distinguishing function, which overlaps greatly with the ‘identify’ function. Other ways of disambiguating the arguments of a transitive predicate (subject agreement, word order restriction, context, intonation, etc.) may explain this cross-linguistic observation. De Hoop and Malchukov argue that case systems that are completely based on the identification function must be richer in case morphology compared to languages based mainly on the distinguishing function.

One theory that has been posited to account for the occurrence of accusative systems is that of functional pressure. When applied to languages, this theory operates around the various needs and pressures on a speech community. It has been suggested that languages have evolved to suit the needs of their users.These communities will develop some functional system to meet the needs that they have. So, it has been proposed that the accusative system arose from a functional pressure to avoid ambiguity and make communication a simpler process.[10][11]

It is useful for languages to have a means of distinguishing between subjects and objects, and between arguments A, S, and O. This is helpful so that sentences like "Tom hit Fred" cannot be interpreted as "Fred hit Tom." Tripartite alignment systems accomplish this differentiation by coding S, A and O all differently. However, this is not structurally economical, and tripartite systems are comparatively rare, but to have all arguments marked the same makes the arguments too ambiguous. Alongside the principle of distinguishability seems to operate a principle of economy. It is more efficient to have as few cases as possible without compromising intelligibility. In this way the dual pressures of efficiency and economy have produced a system which patterns two kinds of arguments together a third separately. Both accusative and ergative systems use this kind of grouping to make meaning clearer.

Because pronominal reference systems to the speaker, addressee, and a third person are so common (some argue universal) cross-linguistically, it would seem that pronoun systems are quite stable. However, the changes involved in second-person pronouns in English call this stability into question and highlight the significance of social forces in language development. The spread of feudalistic ideology caused many European languages to develop two sets of second-person singular pronouns in order to reflect hierarchy. Therefore, pronouns encoded not only person or number, but also the speaker’s assessment of the addressee’s status and the speaker-addressee relationship.

From the thirteenth century, the Middle English plural pronouns ‘ye’ (nominative) and ‘you’ (accusative) were used to address single individuals in upper-class or courtly contexts.[12] As a result, there were two sets of second-person singular pronouns, and the alternative singular pronouns ‘thou’ (nominative) and ‘thee’ (accusative) became increasingly associated with lower status. These distinctions had become established indices of social status by the fifteenth century, and they also developed as indicators of interpersonal relationships at this time: ‘you’ might show emotional distance or be used in a public setting, ‘thou’ familiarity/intimacy in a private setting.[12] We see vestiges of this distinction in languages like German or French that have retained the T-V distinction, but second-person pronouns in these languages, as well as in Italian, Serbo-Croatian, and Swedish, have also begun to undergo change.[13]

Under the pressure of social structural changes and movement towards egalitarian ideology, the English second-person singular pronouns later collapsed to a single term, ’you’.[13] This contraction erased all visible morphological distinction between nominative and accusative case in the second person, effectively sacrificing distinguishability for economy.

Creative use of case marking

There are instances in which nominative–accusative case marking can be used creatively, for example to generate a sense of formality. A common example in English is the use of the nominative form of the 1st person singular pronoun "I" in object, rather than subject, position. For example:

’Anyone who knows my wife and I(NOM)’

’Anyone who knows my wife and me(ACC)’

This variation between ‘I’ and ‘me’ (nominative and accusative) in object position has been linked to the social concerns of politeness and elevated language. This non-standard use of the nominative case in object position carries a certain linguistic prestige. People using this form are often perceived as educated and articulate. This variation shows up frequently in newspapers, magazines and political speeches as well as in daily conversation.[14][15] Conversely, the use of the standard variant ‘my wife and me’ may seem to signal casualness or lack of sophistication.[14][15] This illustrates how case marking is not only a system to be followed, but one that can be used creatively to encode particular social meanings.