Non-negative matrix factorization (NMF), also non-negative matrix approximation[1][2] is a group of algorithms in multivariate analysis and linear algebra where a matrix V is factorized into (usually) two matrices W and H, with the property that all three matrices have no negative elements. This non-negativity makes the resulting matrices easier to inspect. Also, in applications such as processing of audio spectrograms non-negativity is inherent to the data being considered. Since the problem is not exactly solvable in general, it is commonly approximated numerically.

Let matrix V be the product of the matrices W and H,

Matrix multiplication can be implemented as computing the columns vectors of V as linear combinations of the column vectors in W using coefficients supplied by columns of H. That is, each column of V can be computed as follows:

Here's an example based on a text-mining application:

This last point is the basis of NMF because we can consider each original document in our example as being built from a small set of hidden features. NMF generates these features.

Usually the number of columns of W and the number of rows of H in NMF are selected so the product WH will become an approximation to V. The full decomposition of V then amounts to the two non-negative matrices W and H as well as a residual U, such that: V = WH + U. The elements of the residual matrix can either be negative or positive.

When W and H are smaller than V they become easier to store and manipulate. Another reason for factorizing V into smaller matrices W and H, is that if one is able to approximately represent the elements of V by significantly less data, then one has to infer some latent structure in the data.

In standard NMF, matrix factor W ∈ ℝ+m × k， i.e., W can be anything in that space. Convex NMF [11] restricts the columns of W to convex combinations of the input data vectors

In case the nonnegative rank of V is equal to its actual rank, V = WH is called a nonnegative rank factorization.[12][13][14] The problem of finding the NRF of V, if it exists, is known to be NP-hard.[15]

There are different types of non-negative matrix factorizations. The different types arise from using different cost functions for measuring the divergence between V and WH and possibly by regularization of the W and/or H matrices.[1]

The factorization problem in the squared error version of NMF may be stated as: Given a matrix

find nonnegative matrices W and H that minimize the function

Another type of NMF for images is based on the total variation norm.[16]

When L1 regularization (akin to Lasso) is added to NMF with the mean squared error cost function, the resulting problem may be called non-negative sparse coding due to the similarity to the sparse coding problem,[17] although it may also still be referred to as NMF.[18]

Many standard NMF algorithms analyze all the data together; i.e., the whole matrix is available from the start. This may be unsatisfactory in applications where there are too many data to fit into memory or where the data are provided in streaming fashion. One such use is for collaborative filtering in recommendation systems, where there may be many users and many items to recommend, and it would be inefficient to recalculate everything when one user or one item is added to the system. The cost function for optimization in these cases may or may not be the same as for standard NMF, but the algorithms need to be rather different.[19][20]

There are several ways in which the W and H may be found: Lee and Seung's multiplicative update rule [10] has been a popular method due to the simplicity of implementation. Since then, a few other algorithmic approaches have been developed.

Some successful algorithms are based on alternating non-negative least squares: in each step of such an algorithm, first H is fixed and W found by a non-negative least squares solver, then W is fixed and H is found analogously. The procedures used to solve for W and H may be the same[21] or different, as some NMF variants regularize one of W and H.[17] Specific approaches include the projected gradient descent methods,[21][22] the active set method,[4][23] and the block principal pivoting method[24] among several others.

The currently available algorithms are sub-optimal as they can only guarantee finding a local minimum, rather than a global minimum of the cost function. A provably optimal algorithm is unlikely in the near future as the problem has been shown to generalize the k-means clustering problem which is known to be NP-complete.[25] However, as in many other data mining applications, a local minimum may still prove to be useful.

Exact solutions for the variants of NMF can be expected (in polynomial time) when additional constraints hold for matrix V. A polynomial time algorithm for solving nonnegative rank factorization if V contains a monomial sub matrix of rank equal to its rank was given by Campbell and Poole in 1981.[26] Kalofolias and Gallopoulos (2012)[27] solved the symmetric counterpart of this problem, where V is symmetric and contains a diagonal principal sub matrix of rank r. Their algorithm runs in O(rm^2) time in the dense case. Arora, Ge, Halpern, Mimno, Moitra, Sontag, Wu, & Zhu (2013) give a polynomial time algorithm for exact NMF that works for the case where one of the factors W satisfies the separability condition.[28]

Relation to other techniques

In Learning the parts of objects by non-negative matrix factorization Lee and Seung proposed NMF mainly for parts-based decomposition of images. It compares NMF to vector quantization and principal component analysis, and shows that although the three techniques may be written as factorizations, they implement different constraints and therefore produce different results. 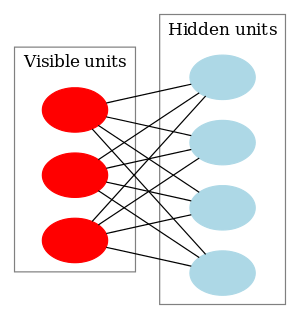 NMF as a probabilistic graphical model: visible units (V) are connected to hidden units (H) through weights W, so that V is generated from a probability distribution with mean

It was later shown that some types of NMF are an instance of a more general probabilistic model called "multinomial PCA".[29] When NMF is obtained by minimizing the Kullback–Leibler divergence, it is in fact equivalent to another instance of multinomial PCA, probabilistic latent semantic analysis,[30] trained by maximum likelihood estimation. That method is commonly used for analyzing and clustering textual data and is also related to the latent class model.

NMF with the least-squares objective is equivalent to a relaxed form of K-means clustering: the matrix factor W contains cluster centroids and H contains cluster membership indicators.[31][32] This provides a theoretical foundation for using NMF for data clustering. However, k-means does not enforce non-negativity on its centroids, so the closest analogy is in fact with "semi-NMF".[11]

NMF extends beyond matrices to tensors of arbitrary order.[34][35][36] This extension may be viewed as a non-negative counterpart to, e.g., the PARAFAC model.

Other extensions of NMF include joint factorisation of several data matrices and tensors where some factors are shared. Such models are useful for sensor fusion and relational learning.[37]

NMF is an instance of nonnegative quadratic programming (NQP), just like the support vector machine (SVM). However, SVM and NMF are related at a more intimate level than that of NQP, which allows direct application of the solution algorithms developed for either of the two methods to problems in both domains.[38]

If the two new matrices

are non-negative they form another parametrization of the factorization.

applies at least if B is a non-negative monomial matrix. In this simple case it will just correspond to a scaling and a permutation.

More control over the non-uniqueness of NMF is obtained with sparsity constraints.[40]

NMF has an inherent clustering property,[31] i.e., it automatically clusters the columns of input data

More specifically, the approximation of

is achieved by minimizing the error function

If we add additional orthogonality constraint on

gives the cluster indicator, i.e., if

cluster. And the computed

gives the cluster centroids, i.e., the

column gives the cluster centroid of

is not explicitly imposed, the orthogonality may hold to a large extent, in which case the clustering property holds too, as may be found in some practical applications of NMF.[citation needed]

When the error function to be used is Kullback–Leibler divergence, NMF is identical to the Probabilistic latent semantic analysis, a popular document clustering method.[41]

NMF can be used for text mining applications. In this process, a document-term matrix is constructed with the weights of various terms (typically weighted word frequency information) from a set of documents. This matrix is factored into a term-feature and a feature-document matrix. The features are derived from the contents of the documents, and the feature-document matrix describes data clusters of related documents.

One specific application used hierarchical NMF on a small subset of scientific abstracts from PubMed.[42] Another research group clustered parts of the Enron email dataset[43] with 65,033 messages and 91,133 terms into 50 clusters.[44] NMF has also been applied to citations data, with one example clustering Wikipedia articles and scientific journals based on the outbound scientific citations in Wikipedia.[45]

Arora, Ge, Halpern, Mimno, Moitra, Sontag, Wu, & Zhu (2013) have given polynomial-time algorithms to learn topic models using NMF. The algorithm assumes that the topic matrix satisfies a separability condition that is often found to hold in these settings. [28]

NMF is also used to analyze spectral data; one such use is in the classification of space objects and debris.[46]

NMF is applied in scalable Internet distance (round-trip time) prediction. For a network with

hosts, with the help of NMF, the distances of all the

end-to-end links can be predicted after conducting only

NMF has been successfully applied in bioinformatics for clustering gene expression and dna methylation data and finding the genes most representative of the clusters.[50][51]

NMF, also referred in this field as factor analysis, has been used since the 80s [53] to analyze sequences of images in SPECT and PET dynamic medical imaging. Non-uniqueness of NMF was addressed using sparsity constraints.[54]

Current[when?] research in nonnegative matrix factorization includes, but not limited to,

(1) Algorithmic: searching for global minima of the factors and factor initialization.[55]

(3) Online: how to update the factorization when new data comes in without recomputing from scratch, e.g., see online CNSC [58]