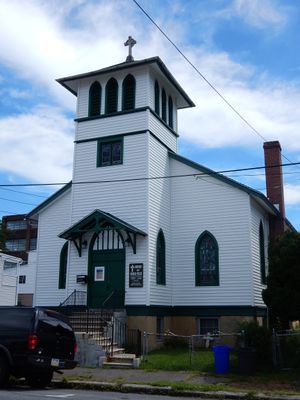 Church of Broken Pieces (est. 1982) in Minersville, Pennsylvania, is a nondenominational church.

Nondenominational (or non-denominational) churches are those which typically distance themselves from the confessionalism and/or creedalism of other Christian communities[1] by calling themselves non-denominational. Often founded by individual pastors, they have little affiliation with historic denominations, although they almost always adhere to Evangelicalism.[2][3][4]

Many of the nondenominational churches trace their origins back to the United States. Their history is often associated with American Protestantism, even though nondenominationals emphasize their Christian identity above all others. A 2012 Gallup survey reported that 10 percent of U.S. adults identify as non-specific Christian.[5]

According to James Walker:

The visible churches, in the idea of the Scottish theologians, is catholic. You have not an indefinite number of Parochial, or Congregational, or National churches, constituting, as it were, so many ecclesiastical individualities, but one great spiritual republic, of which these various organizations form a part. The visible church is not a genus, so to speak, with so many species under it. It is thus you may think of the State, but the visible church is a totum integrale, it is an empire. The churches of the various nationalities constitute the provinces of this empire; and though they are so far independent of each other, yet they are so one, that membership in one is membership in all, and separation from one is separation from all... This conception of the church, of which, in at least some aspects, we have practically so much lost sight, had a firm hold of the Scottish theologians of the seventeenth century.[8]

In some countries where the Protestant Reformation took place, the founders claimed that the result was not a new denomination but a reformation of a supposedly pre-existing "national church".

Denominationalism was accelerated in the aftermath of the Westminster Assembly convened by the English Parliament to formulate a form of religion for the national churches of England and Scotland. In the debate between the two main parties present at the Assembly, the Presbyterians and the Independents, the Presbyterians were in favour of a form of church government that maintained the visible organizational unity of the Catholic Church while Independents, weary of the ecclesiastical tyranny they experienced under the Episcopal system, wished to organize the churches in a congregational way envisioning no legitimate authority of the church above the local congregation meeting at one time in a single place. These two parties were not reconciled and following the Assembly the Independents formed their own independent church. Thus, instead of a united expression of the Catholic Church in England, there were now two churches.

Protestant denominations spread and multiplied, especially in the United States, as denominational confessional statements began to be used more to exclude than to include Christians with different doctrinal convictions.[citation needed] Each denomination maintains to differing degrees some form of organizational and visible unity with its member churches, albeit radically decentralized compared with the Catholic Church.

Today, non-denominational churches, like the Independents at the Westminster Assembly, refuse to recognize any ecclesiastical authority above the local congregation and deny the visible unity of the Church (though not the unity of the invisible Church) despite the fact that the original denominations were formed by substantially the same ideology.

Boston University religion scholar Stephen Prothero argues that nondenominationalism hides the fundamental theological and spiritual issues that drove the division of Christianity into denominations in the first place behind a veneer of "Christian unity". He argues that nondenominationalism encourages a descent of Christianity—and indeed, all religions—into comfortable "general moralism" rather than being a focus for facing the complexities of churchgoers' culture and spirituality. Prothero further argues that it also encourages ignorance of the Scriptures, which in turn reduces overall religious literacy, increasing the potential for inter-religious misunderstandings and conflict.[11]

Jonathan A. Mitchican, a traditionalist Anglican priest, has also argued that the term non-denominational is essentially misleading: "If an American church calls itself 'non-denominational,' nine times out of ten what that means is Baptist. Altar calls and appeals to personal conversion replace the sacraments as the means of grace. Baptism is a symbol of one's personal conversion, nothing more, and it is only appropriate for adults."[12]