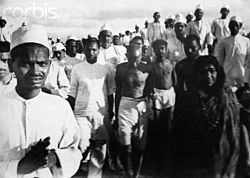 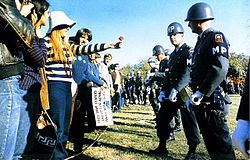 A demonstrator offers a flower to military police at an National Mobilization Committee to End the War in Vietnam sponsored protest in Arlington, Virginia, on October 21, 1967
File:Non-violent resistance during the No NATO protests, Chicago, May 20, 2012.png
A "No NATO" protester in Chicago, 2012

Nonviolent resistance (NVR or nonviolent action) is the practice of achieving goals such as social change through symbolic protests, civil disobedience, economic or political noncooperation, satyagraha, or other methods, without using violence. This type of action highlights the desires of an individual or group that feels that something needs to change to improve the current condition of the resisting person or group. It is largely but wrongly taken as synonymous with civil resistance. Each of these terms ("nonviolent resistance" and "civil resistance") has its distinct merits and also quite different connotations and commitments, which are briefly explored in the entry on civil resistance.

The modern form of non-violent resistance was popularised and proven to be effective by the Indian leader Mahatma Gandhi in his efforts to gain independence from the British.

From 1966 to 1999, nonviolent civic resistance played a critical role in 50 of 67 transitions from authoritarianism.[1] Recently, nonviolent resistance has led to the Rose Revolution in Georgia and the Orange Revolution in Ukraine. Current nonviolent resistance includes the Jeans Revolution in Belarus, the "Jasmine" Revolution in Tunisia, and the fight of the Cuban dissidents. Many movements which promote philosophies of nonviolence or pacifism have pragmatically adopted the methods of nonviolent action as an effective way to achieve social or political goals. They employ nonviolent resistance tactics such as: information warfare, picketing, marches, vigils, leafletting, samizdat, magnitizdat, satyagraha, protest art, protest music and poetry, community education and consciousness raising, lobbying, tax resistance, civil disobedience, boycotts or sanctions, legal/diplomatic wrestling, underground railroads, principled refusal of awards/honours, and general strikes. Nonviolent action differs from pacifism by potentially being proactive and interventionist.

A great deal of work has addressed the factors that lead to violent mobilization, but less attention has been paid to understanding why disputes become violent or nonviolent, comparing these two as strategic choices relative to conventional politics.[2] 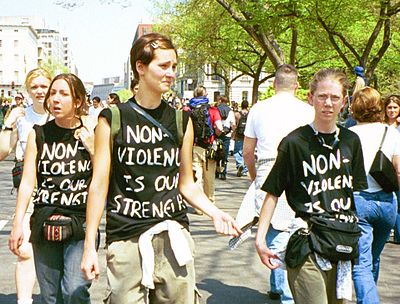 Pro-nonviolence protesters at an anti-globalization protest

From the 20th century

From the 21st century