Norddeutscher Rundfunk (NDR) (Northern German Broadcasting) is a public radio and television broadcaster, based in Hamburg. In addition to the city-state of Hamburg, NDR transmits for the German states of Lower Saxony, Mecklenburg-Vorpommern and Schleswig-Holstein. NDR is a member of the ARD consortium. 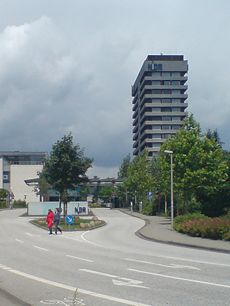 NDR's studios in Hamburg are in two locations, both within the borough of Eimsbüttel: the television studios are in the quarter of Lokstedt while the radio studios are in the quarter of Rotherbaum, a little closer to the city centre. There are also regional studios, having both radio and television production facilities, in the state capitals Hanover, Kiel and Schwerin. In addition NDR maintains facilities at ARD's national studios in Berlin.

NDR is in part funded by the limited sale of on-air commercial advertising time; however, its principal source of income is the revenue derived from viewer and listener licence fees. As of 2015 the monthly fee due from each household for radio and television reception was €17.50. These fees are collected not directly by NDR but by a joint agency of ARD (and its member institutions), ZDF, and Deutschlandradio.

NDR currently provides a number of services on its own or in co-operation with other broadcasters:

NDR has four musical organizations, including two orchestras, a chorus and a "big band":

In Mecklenburg-Vorpommern, in the former East Germany, NDR programmes are broadcast from facilities owned by Media Broadcast GmbH, a former subsidiary of the Deutsche Telekom AG.

In 1924 broadcasting began in Hamburg, when Norddeutsche Rundfunk AG (NORAG) was created. In 1934 it was incorporated into the Großdeutscher Rundfunk, the national broadcaster controlled by Joseph Goebbels's Propagandaministerium, as Reichssender Hamburg.

In 1930, NORAG commissioned the Welte-Funkorgel – a large theatre organ custom-built by the firm of M. Welte & Sons to meet the specific acoustic requirements of radio broadcasting – and installed it in their radio studio (today the world's oldest such facility still in use) on Rothenbaumchaussee 132, Hamburg, where it continues to be played, now maintained by volunteers.[1]

In the British Zone of occupied Germany, the military authorities quickly established Radio Hamburg to provide information to the population of the area.

The British Control Commission appointed Hugh Greene to manage the creation of public service broadcasting in their Zone. On 22 September 1945, Radio Hamburg became Nordwestdeutscher Rundfunk, the single broadcasting organisation of the British Zone.

NDR continued to operate out of Hamburg. The split was effective from 1 January 1956, although the station NWDR1 remained a joint operation with regional opt-outs.

File:Norddeutscher Rundfunk (logo, 1980-2001).svg
The previous logo of NDR between 1984 and 2001, which featured Antje the Walrus, the mascot of the broadcaster for the north.[2]

In 1977, Gerhard Stoltenberg, the minister-president of Schleswig-Holstein unilaterally cancelled the NDR-Staatsvertrag, the governing body of NDR. This caused a discussion how to organise broadcasting in the North German region.

In 1980, NDR signed a new convention with the three Länder, changing the pattern of broadcasting and creating new regional services. NDR1 was divided into three independent radio stations from 2 January 1981:

On 1 April 1989, NDR introduced its fourth radio service, NDR4. This service was later renamed NDR4 Info and since 2 June 2002 has been known as NDR Info. The station is a news and information service for the whole NDR region.

On 1 January 1992, Mecklenburg-Vorpommern in the former East Germany joined NDR as the fourth state in the organisation. The area receives the main NDR radio and television stations, plus the regional NDR 1 Radio mV, which has subregions based in Schwerin, Rostock, Neubrandenburg and Greifswald. In October of the same year, SFB in Berlin stopped relaying the Nord 3 television service in favour of its own Berlin 1 TV channel.

On 3 October 1997, NDR3 was relaunched as Radio 3, produced in co-operation with Ostdeutscher Rundfunk Brandenburg. At the end of 2000, SFB joined Radio 3. This arrangement lasted until ORB and SFB merged on 1 January 2003 and started íts own classical and culture network. NDR3 became NDR Kultur on 1 January 2003.

On 1 November 2001, NDR and Radio Bremen launched a joint radio station, Nordwestradio, to serve Bremen and northwestern Lower Saxony. This service replaced Radio Bremen 2 and control of the service remains with Radio Bremen.

As the organization responsible within the ARD consortium of German public-service broadcasters for overseeing the country's participation in the Eurovision Song Contest, NDR staged the 56th annual contest which was held in Düsseldorf on 10–14 May 2011, outside their own broadcasting area.