From Infogalactic: the planetary knowledge core
Jump to: navigation, search
This article is about the social and economic model in northern Europe. For the socioeconomic model in continental Europe and Germany in particular, see Rhenish model. For the political ideology often associated with the Nordic model, see Social democracy.

The Nordic model (also called Nordic capitalism[1] or Nordic social democracy)[2][3] refers to the economic and social policies common to the Nordic countries (Denmark, Finland, Norway, Iceland and Sweden). This includes a combination of free market capitalism with a comprehensive welfare state and collective bargaining at the national level.[4][5]

Although there are significant differences among the Nordic countries, they all share some common traits. These include support for a "universalist" welfare state aimed specifically at enhancing individual autonomy and promoting social mobility; a corporatist system involving a tripartite arrangement where representatives of labor and employers negotiate wages and labor market policy mediated by the government;[6] and a commitment to widespread private ownership, free markets and free trade.[7]

Each of the Nordic countries has its own economic and social models, sometimes with large differences from its neighbours.[8] According to sociologist Lane Kenworthy, in the context of the Nordic model, "social democracy" refers to a set of policies for promoting economic security and opportunity within the framework of capitalism rather than a system to replace capitalism.[9] 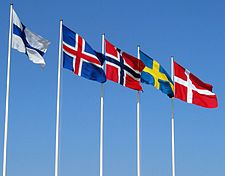 Flags of the Nordic countries

"The Nordic Model – Embracing globalization and sharing risks" characterises the system as follows:[10]

The Nordic countries share active labor market policies as part of a corporatist economic model intended to reduce conflict between labor and the interests of capital. The corporatist system is most extensive in Sweden and Norway, where employer federations and labor representatives bargain at the national level mediated by the government. Labor market interventions are aimed at providing job retraining and relocation.[21]

The Nordic labor market is flexible, with laws making it easy for employers to hire and shed workers or introduce labor-saving technology. To mitigate the negative effect on workers, the government labor market policies are designed to provide generous social welfare, job retraining and relocation to limit any conflicts between capital and labor that might arise from this process.[7]

The Nordic model is underpinned by a free market capitalist economic system that features high degrees of private ownership[5] with the exception of Norway, which includes a large number of state-owned enterprises and state ownership in publicly listed firms.[22]

The Nordic model is described as a system of competitive capitalism combined with a large percentage of the population employed by the public sector (roughly 30% of the work force).[23] In 2013, The Economist described its countries as "stout free-traders who resist the temptation to intervene even to protect iconic companies" while also looking for ways to temper capitalism's harsher effects, and declared that the Nordic countries "are probably the best-governed in the world".[24][25] Some economists have referred to the Nordic economic model as a form of "cuddly" capitalism, with low levels of inequality, generous welfare states and reduced concentration of top incomes, and contrast it with the more "cut-throat" capitalism of the United States, which has high levels of inequality and a larger concentration of top incomes.[10][26][27]

Beginning in the 1990s, the Swedish economy pursued neoliberal reforms[28][29] that reduced the role of the public sector, leading to the fastest growth in inequality of any OECD economy.[30] However, Sweden's income inequality still remains lower than most other countries.[31]

The Nordic welfare model refers to the welfare policies of the Nordic countries, which also tie into their labor market policies. The Nordic model of welfare is distinguished from other types of welfare states by its emphasis on maximizing labor force participation, promoting gender equality, egalitarian and extensive benefit levels, the large magnitude of income redistribution, and liberal use of expansionary fiscal policy.[32]

While there are differences among different Nordic countries, they all share a broad commitment to social cohesion, a universal nature of welfare provision in order to safeguard individualism by providing protection for vulnerable individuals and groups in society, and maximizing public participation in social decision-making. It is characterized by flexibility and openness to innovation in the provision of welfare. The Nordic welfare systems are mainly funded through taxation.[33]

Despite the common values, the Nordic countries take different approaches to the practical administration of the welfare state. Denmark features a high degree of private sector provision of public services and welfare, alongside an assimilation immigration policy. Iceland's welfare model is based on a "welfare-to-work" (see: workfare) model, while part of Finland's welfare state includes the voluntary sector playing a significant role in providing care for the elderly. Norway relies most extensively on public provision of welfare.[33]

Jerry Mander has likened the Nordic model to a kind of "hybrid" system which features a blend of capitalist economics and socialist values.[36] Lane Kenworthy advocates for the U.S. to make a gradual transition to an economic system similar to those of the Nordic countries.[37] United States Senator Bernie Sanders (I-VT), a self-described democratic socialist, has been a strong proponent of the Nordic system.[38][39][40] Nobel Prize-winning economist Joseph Stiglitz has noted that there is higher social mobility in the Scandinavian countries than in the United States, and argues that Scandinavia is now the land of opportunity that the United States once was.[41] American feminist author Ann Jones, who lived in Norway for four years, contends "the Nordic countries give their populations freedom from the market by using capitalism as a tool to benefit everyone," whereas in the United States "neoliberal politics puts the foxes in charge of the henhouse, and capitalists have used the wealth generated by their enterprises (as well as financial and political manipulations) to capture the state and pluck the chickens."[42]

According to Naomi Klein, former Soviet leader Mikhail Gorbachev sought to move the USSR in a similar direction to the Nordic system, combining free markets with a social safety net—but still retaining public ownership of key sectors—ingredients that he believed would transform the USSR into "a socialist beacon for all mankind."[43][44]

The Nordic combination of extensive public provision of welfare and a culture of individualism has been described by Lars Trägårdh, of Ersta Sköndal University College, as "statist individualism".[45]

A 2016 survey by the think tank Israel Democracy Institute found that nearly 60 percent of Israeli Jews prefer a "Scandinavian model" economy, with high taxes and a robust welfare state.[46]

Historian Guðmundur Jónsson argues that it would be inaccurate to include Iceland in the Nordic model of consensus democracy. He writes, "Icelandic democracy is better described as more adversarial than consensual in style and practice. The labour market was rife with conflict and strikes more frequent than in Europe, resulting in strained government–trade union relationship. Secondly, Iceland did not share the Nordic tradition of power-sharing or corporatism as regards labour market policies or macro-economic policy management, primarily because of the weakness of Social Democrats and the Left in general. Thirdly, the legislative process did not show a strong tendency towards consensus-building between government and opposition with regard to government seeking consultation or support for key legislation. Fourthly, the political style in legislative procedures and public debate in general tended to be adversarial rather than consensual in nature."[48]