MMC Norilsk Nickel (Russian: ГМК «Норильский Никель») is a Russian nickel and palladium mining and smelting company. Its largest operations are located in the Norilsk–Talnakh area near the Yenisei River, in northern Russia. It also has holdings near the Kola Peninsula at Nikel, Zapolyarny, and Monchegorsk; in western Finland at Harjavalta; in southern Africa in Botswana and South Africa; and in western Australia. MMC stands for "Mining and Metallurgical Company".

Norilsk Nickel is headquartered in Moscow and is the world's leading producer of nickel and palladium. It is ranked among the top ten copper producers.

The company is listed on MICEX-RTS. The key shareholders are Vladimir Potanin's Interros and Oleg Deripaska's Rusal: each reportedly owns over 25% of shares. In December 2010, Norilsk offered to buy out Rusal's share for US$12 billion, but the offer was declined.[1]

Mining began in the Norilsk area in the 1920s. The Soviet government created the "Norilsk Combine" in 1935 and passed control to the NKVD. In 1943 Norilsk produced 4,000 tons of refined nickel and in 1945 hit the target figure of 10,000 tons. Mining and metal production continued first with Gulag forced labour, later with much volunteer labour owing to the comparatively good wages offered.

In 1993 after the fall of the Soviet Union a joint-stock company was created, RAO Norilsk Nickel. Two years afterwards control over the deeply indebted company, which was bleeding cash at a rate of about $2m a day amid falling nickel prices, was given to a private company Interros. By the time the privatization was completed in 1997, the company became profitable and the workers were paid. Nowadays average pay is over $1,000 per month and workers enjoy two to three months of vacations; nevertheless, working and living conditions in Norilsk remain harsh.

Starting in 2002, MMC Norilsk Nickel began purchasing gold mining assets, which were spun off in 2005 as Polyus Gold.

In 2003, the company took control of Stillwater Mining Company, the only US producer of palladium. Stillwater operates a platinum group metals (PGM) facility in Stillwater, Montana in the USA. In November 2010, Norilsk Nickel announced that it was selling Stillwater.[2]

During 2007, Norilsk has acquired a host of mining and metallurgical assets abroad, transforming itself into a multinational with operations in Australia, Botswana, Finland, Russia, South Africa, and the United States. The key deal was completed on June 28, 2007, when Norilsk Nickel acquired about 90 per cent of Canada's LionOre Mining International Ltd, the world's 10th-largest nickel producer at the time. This takeover, valued at US$6.4 billion, is the biggest acquisition abroad by a Russian company, making Norilsk Nickel the world's largest nickel producer.[3][4] 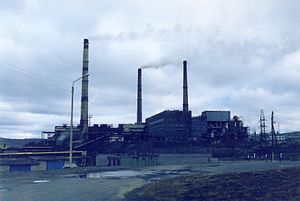 The Norilsk Nickel plant in Nikel 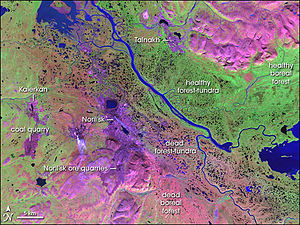 False-color satellite image of Norilsk and the surrounding area

The nickel deposits of Norilsk-Talnakh are without doubt the largest nickel-copper-palladium deposits in the world. The deposit was formed 250 million years ago during the eruption of the Siberian Traps igneous province (STIP). The STIP erupted over one million cubic kilometres of lava, a large portion of it through a series of flat-lying lava conduits lying below Norilsk and the Talnakh Mountains. The Siberian Traps are considered to be responsible for the mass extinction event at the end of the Permian.

The ore was formed when the erupting magma became saturated in sulphur, forming globules of pentlandite, chalcopyrite, and other sulphides. These sulphides were then "washed" by the continuing torrent of erupting magma, and upgraded their tenor with nickel, copper, platinum, and palladium. The current resource known for these mineralised intrusion exceeds 1.8 billion tons.

The deposits are being explored using electromagnetic field geophysics, with detection loops on the Earth's surface with dimensions of over 1,000 m on a side. They are conclusively able to image the conduction nickel ore at depths in excess of 1,800 m.

The company has a back-catalogue of environmental problems that include:

Ore is smelted on site at Norilsk. The smelting is directly responsible for severe pollution, including acid rain and smog. By some estimates, 1 percent of the entire global emission of sulfur dioxide originates here. Heavy metal pollution in the area is so severe that the soil itself has platinum and palladium content which is feasible to mine.[5]

The pollution originating from Kola division of the company is also affecting Norway which since 1990 has offered financial support to clean up the operation. Due to a number of factors, however, this has not materialized.

2007 - Rosprirodnadzor (Federal Environmental, Industrial and Nuclear Supervision Service of Russia) took water samples in Norilsk as part of the check up. The check up was initiated by the group of the city dwellers who filed the petition claiming deterioration of water quality due to industrial activity of NN branch in this city. Newspaper Kommersant was informed by Oleg Mitvol, the Chairman of Rosprirodnadzor, that results of the water tests were expected to be ready by the end of August. Company official said in their comment that NN spent over 19 bln roubles on environmental activity and 1 billion more will be spent till 2015. When asked by the reporter if Norilsk Nickel can suffer any consequences after the results of the check up, the state official said that he won’t make any promises or predictions.[6][7][8]

The environmental problems at Norilsk stretch back over decades, but in the last 10 years when current NN management came to power it did not get much better. Back in 2004 M. Prokhorov claimed that NN will be able to resolve most of ecological problems in the area within 5–6 years. By 2008 this timeline moved to 2011 or 2015.Though NN claims to be socially responsible business and invests into modernization.

Norilsk Nickel has worked consistently to reduce emissions of major air pollutants. In 2006, the company reported investment of more than US $5m to maintain and overhaul its dust and gas recovery and removal systems. It asserts a commitment of nearly US $1.4m for its air pollution prevention plan. However, official statistics state that emissions remain extremely high. In 2006, international non-for-profit organization Blacksmith Institute entitled Norilsk the name of the City of Horror. Norilsk is one of the most polluted places on the Earth. NN wrote a protest letter but state of affairs was left unchanged. Local environmental experts report that that although there have been some reductions in pollution levels, levels of SO2, HS, phenol, formaldehyde, and dust had increased; levels of nickel and copper had increased by 50%. Morbidity rates are stable and death rates are decreasing.

Nevertheless there were no measures taken against NN. In the end of December the company issued a press release on cooperation with Federal Environmental, Industrial and Nuclear Supervision Service of Russia (Rostekhnadzor) and Norilsk Nickel signed a protocol of cooperation with regard to industrial safety and environment protection in the development of the Company’s operations.

The Russian-owned Norilsk Nickel mine in Harjavalta western Finland released 66,000 kg Nickel in the local Kokemäenjoki (Kokemäki River) in July 2014. After release the nickel concentrations were 400 times normal levels. This was the largest known Ni release in Finnish history.[10][11]

Gipronickel Institute, in St Petersburg performs the design and construction of Norilsk's facilities. Gipronickel does research in every field of metallurgy, including extraction, patenting, design and more.

Norilsk Nickel uses the port of Dudinka to load nickel and palladium on ships for export.

Interros Holding Company, based in Moscow, is the controlling shareholder of Norilsk.

In partnership with Argosy Minerals of Australia, Norilsk attempted to operate Nakety/Bogota, a nickel mine on the island of New Caledonia in the South Pacific. Norilsk has withdrawn from this project.

Vale Inco, BHP and Anglo Platinum are important competitors to Norilsk in the production of nickel and of palladium.