The league consists of four divisions with a total of 22 teams. The teams span the United States from Pennsylvania in the East to Washington in the West and from Alaska in the North to Texas in the South. The teams play a 60-game regular season, starting in mid-September and ending in early April. The top two teams of the NAHL playoffs will meet in a predetermined location to play in the Robertson Cup Championship Tournament.

From its beginning in 1975, the NAHL was primarily a 6–12-team league based in the Midwest, known as the Great Lakes Junior Hockey League and changed the name to the North American Hockey League in 1984.[2][3] Jason Weber, of Livonia, Michigan, is the all-time leading scorer in the NAHL, tallying 65 goals and 115 assists for 180 points from 1990 to 1992. Other notable alumni from the NAJHL include Pat Lafontaine, Mike Modano, Doug Weight, Pat Peake, Brian Rolston, Brian Holzinger, Brian Rafalski, and Todd Marchant. In 2003, the league merged with the defunct America West Hockey League to form a 19-team league, the NAHL, which has led to the current 22 teams to begin play in the 2015–16 season. 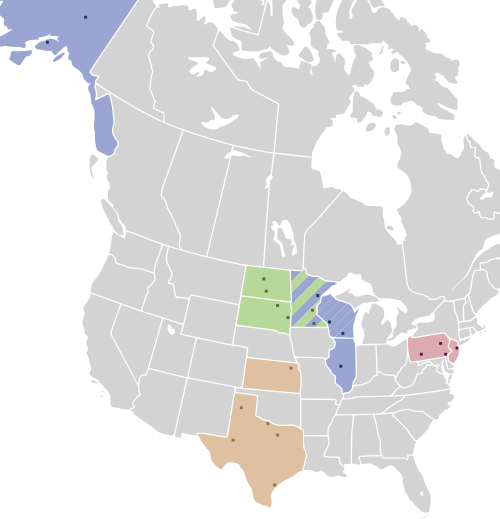 2008–09 season: The Southern Minnesota Express moved to Detroit and changed their name to the Motor City Machine.[8] However, the Express' home city of Owatonna was granted another NAHL team for 2008–09, named the Owatonna Express.[9] The Express were joined by another new Minnesota NAHL franschise, the Albert Lea Thunder.[10] The Texas Tornado franchise went on a one-year hiatus as they awaited renovations on their arena. Wenatchee, Washington, was awarded an expansion franchise for the 2008–09 season.[11] The Fargo-Moorhead Jets were approved for dormancy.[12]

2009–10 season: The Janesville Jets were awarded an expansion franchise.[13] The Mahoning Valley Phantoms and the USNTDP left the league for the USHL.[14][15] The Texas Tornado returned to the league after taking a year off while their home arena was undergoing renovations.[16] The Motor City franchise's new ownership changed the team's nickname from Machine to Metal Jackets.[17]

2014–15 season: The Port Huron Fighting Falcons were relocated to Connellsville, Pennsylvania, to become the Keystone Ice Miners, remaining in the North Division, and the Wenatchee Wild moved from the Midwest Division to the South Division.[18]

2015–16 season: On May 1, 2015 the NAHL announced that the dormant Dawson Creek Rage franchise was purchased by the Wilkes-Barre/Scranton Knights organization to be an expansion team for the 2015–16 season.[19] The Keystone Ice Miners ceased operations. The Michigan Warriors ceased operations due to the arrival of the major junior Flint Firebirds. The Soo Eagles announced they were returning to the Northern Ontario Junior Hockey League citing the lack of other local teams as they were the last remaining team in Michigan. The New Jersey Junior Titans organization bought the franchise from the Eagles and relocated to Middleton, New Jersey. The Eagles originally sought membership with the NAHL for the 2012–13 season and returned to the NOJHL for the season 2015–16 season. The Rio Grande Valley Killer Bees were relocated to Aston, Pennsylvania and became the Aston Rebels. A new East Division was formed composed of Aston, Johnstown, New Jersey, and Wilkes-Barre/Scranton. The Wenatchee Wild organization left the NAHL and joined the Canadian Junior A British Columbia Hockey League.