The District was originally established on 4 May 1918, and reorganised as a field formation during the Russian Civil War. The First Cavalry Army was formed in the District in November 1919.[1] The District was reformed in the early 1920s with its headquarters at Rostov. Kliment Voroshilov was made district commander. During the 1920s and 1930s the District became home to many training establishments, which were to multiply greatly during World War II.

The 23rd Rifle Division was reported to have formed in the district prior to August 1932.[2]

In June 1941 the district's first line troops comprised the 64th Rifle Corps commanded by Major General A.D. Kuleshov with the 165th and 175th Rifle Divisions, the 26th Mechanised Corps with the 52nd and 56th Tank Divisions and the 203rd Mechanised Division, the 28th Mountain Rifle Division, and the 157th Rifle Division.[3] The 19th Army was formed in the District in May–June 1941 under former district commander Ivan Konev and was engaged against the Germans from the beginning of Operation Barbarossa. 50th and 53rd Cavalry Divisions were also formed here, joining the Soviet Western Front.

Later the District became the site of the battles around Rostov in November 1941 where the Germans suffered defeat, and the Battle of Stalingrad, which has been described as the most ferocious battle to date. Following the conclusion of the Battle of the Caucasus, the North Caucasian Front and the headquarters of the 56th Army were disbanded in accordance with a Supreme Command directive of the 20 November 1943. The Separate Coastal Army was formed, for the second time, on their base. 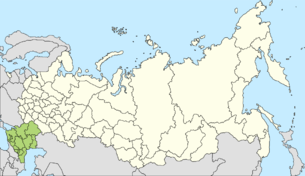 In 1946 the Donskoy Military District was renamed again as the North Caucasian MD. The official Russian military website notes the work of the soldiers of the district in helping repair the ravages of the war.

The important Kapustin Yar test range was created in the District following the war.

The District was awarded the Order of the Red Banner in 1968.

In 1989, the 14th Tank Division was transferred to the MVD, and retitled as the 100th Motorised Division for Special Use MVD.[7]

The official website underlines the importance of the District as a border formation with the task of securing the southern boundary of the Russian Federation. The first conflict the District became involved in in the post Soviet period was the attempted secession of South Ossetia from Georgia to join North Ossetia, which is a federal subject of the Russian Federation. Soldiers from the District became involved in protecting installation in Vladikavkaz from irregular fighters in late 1992.

In 1990, there were three army corps in the district. The 42nd Army Corps at Vladikavkaz commanded the 19th Motor Rifle Division, the 12th Army Corps at Krasnodar, briefly to become the 49th Army, commanded the 9th MRD, and the 34th Army Corps at Volgograd commanded the 82nd Motor Rifle Division. Units directly under district command included the 110th Artillery Division at Buynaksk, a training division at Groznyy, one SSM, one SAM, one artillery, and one pipeline brigade. There were also reserve (no equipment) units : an artillery brigade, an anti-tank brigade, and a SAM brigade.(Duncan JIR 1996) The 58th Army's creation was announced on April 26, 1995; previously there had only been corps headquarters in the District (and the 58th was formed from the previous 42nd Army Corps headquarters).[11]

The District has been the primary Russian military formation responsible for managing the Chechen conflict throughout the First and Second Chechen Wars. Insurgent activity slowly decreased in the early 2000s. Twenty-six soldiers won the star of the Hero of the Russian Federation in the first war, and 43 in the second.

Today the Armed Forces do not have the primary role in directing the anti-terrorist effort in the North Caucasus region. The Regional Operational Headquarters (ROSh), chaired by the Deputy Director FSB RF (Head of the department for protection of the constitutional structure and the campaign against terrorism) directs and conducts the counter-terrorist operation.[13] Subordinated to it is the Combined Grouping of Troops (OGV) in the North Caucasus drawing on the Armed Forces, the Interior Troops, the FSB, and other agencies.

During the 2008 South Ossetia War, troops from this MD were involved in combat operations in South Ossetia and inside Georgian territory. 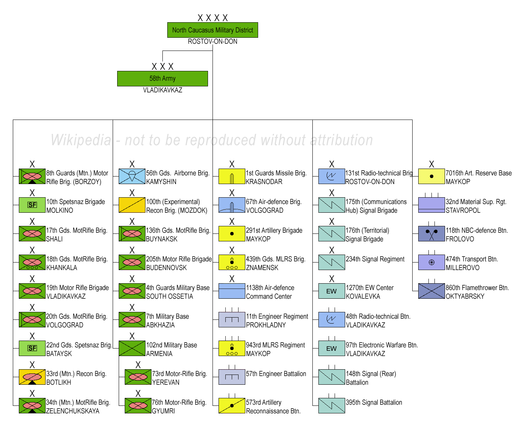 Structure and units of the North Caucasus Military District 2010