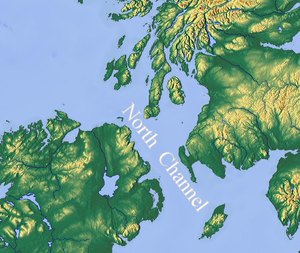 Map of the North Channel 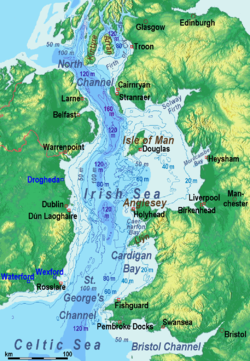 Relief map of the Irish Sea. The North Channel lies to the north of the Irish Sea, and the St George's Channel to the south. (Major ports shown as red dots. Freight-only ports as blue dots)

The North Channel (known in Irish and Scottish Gaelic as Sruth na Maoile, and alternatively in English as the Straits of Moyle or Sea of Moyle) is the strait between north-eastern Ireland and south-western Scotland.[1] It connects the Irish Sea with the Atlantic Ocean, and is part of the marine area officially classified as the "Inner Seas off the West Coast of Scotland" by the International Hydrographic Organization (IHO).[2]

The Channel was a favourite haunt of privateers preying on British merchant shipping in wars until the 19th century; in 1778, during the American Revolutionary War it was also the site of a naval duel between American captain John Paul Jones's Ranger and the Royal Navy's Drake. It is crossed by a large number of ferry services. In 1953, it was the scene of a serious maritime disaster, the sinking of the ferry Princess Victoria.

In Northern Ireland, Unionist political leaders for decades lobbied the British government to construct a railway tunnel under the Channel, to better link Northern Ireland with the rest of the United Kingdom. In August 2007 the Centre for Cross-Border Studies proposed the construction of a 34-kilometre (21 mi) long rail bridge or tunnel, estimating that it might cost about £3.5 billion.[4] In the Victorian era, engineers proposed a rail tunnel between Stranraer and Belfast.[5]

This strait was formerly known as the Irish Channel.[6][7][8] In the 19th century, Alexander Keith Johnston's suggested name St Patrick's Channel had currency, but it was rejected by the hydrographic department[who?].[9]

The Irish Long Distance Swimming Association (ILDSA) has provided authentication observers for swimmers attempting to cross the approximately 35-kilometre (22 mi) span between Northern Ireland and the Mull of Galloway. According to the ILDSA, this was first accomplished in 1947 by Tom Blower.[10] The first two-way crossing was completed by a six-person relay team on 28 July 2015.[11]