North Florida is a region of the U.S. state of Florida, comprising the northern parts of the state. It is one of Florida's three most common "directional" regions, along with Central Florida and South Florida. It includes Jacksonville and nearby localities in Northeast Florida, an interior region known as North Central Florida, and the Florida Panhandle.

As with many vernacular regions, North Florida does not have any officially designated boundaries or status, and is defined differently in different sources. A 2007 study of Florida's regions by geographers Ary Lamme and Raymond K. Oldakowski found that Floridians surveyed identified "North Florida" as comprising the northernmost areas of the state, including both the peninsula and the Florida Panhandle. Additionally, two localized "directional" regions had emerged: North East Florida, representing the area around Jacksonville on the Atlantic coast, and North Central Florida, comprising the central area.[2] North Florida is one of Florida's three most common directional regions, along with Central Florida and South Florida.[3] The region includes smaller vernacular regions, particularly along the coast, including the Emerald Coast and the Big Bend on the Gulf Coast and the First Coast and Halifax area on the Atlantic.[2] Lamme and Oldakowski note that the directional region is more commonly used in the interior areas than on the coast.[3]

Enterprise Florida, the state's economic development agency, divides the state into three economic regions, used within the agency and other state and outside entities, including the Florida Department of Transportation. They identify three regions within the area identified as "North Florida" by Enterprise Florida: Northeast Florida, North Central Florida, and Northwest Florida (representing most of the Panhandle).[4]

Politically, in contrast to Central Florida, where a majority considered their part of the state moderate, and South Florida, which was more liberal, residents of North Florida overwhelmingly (76%) considered their part of the state conservative; 16% considered it moderate and 8% considered it liberal.[5] Lamme and Oldakowski's findings track with Barney Warf and Cynthia Waddell's studies of Florida's political geography during the 2000 Presidential election.[5][6]

The following regions are entirely or partly within Northern Florida:

Parks and other protected areas

Other parks and protected areas 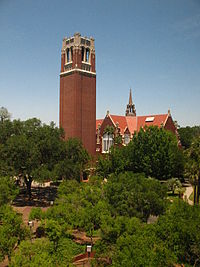 Century Tower at the University of Florida in Gainesville

Student Union Building at the University of North Florida in Jacksonville 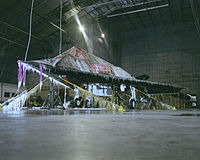