listen (help·info)) is a federal subject of Russia (a republic).

In the last years of the Soviet Union, as nationalist movements swept throughout the Caucasus, many intellectuals in the North Ossetian ASSR called for the revival of the name of Alania, a medieval kingdom of the Alans. The term of "Alania" quickly became popular in Ossetian daily life through the names of various enterprises, a TV channel, political and civic organizations, publishing house, football team, etc. In November 1994, the name of "Alania" was officially added to the republican title (Republic of North Ossetia-Alania).[14] 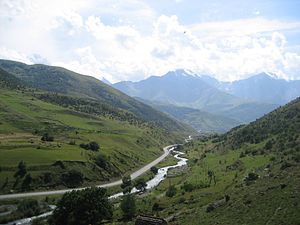 All of the republic's rivers belong to the drainage basin of the Terek River. Major rivers include:

All of the mountains located on the territory of the republic are a part of the Caucasus. Mount Kazbek is the highest point (5,033 m), with Mount Dzhimara being the second highest (4,780 m).

The territory of North Ossetia was first inhabited by Caucasian tribes. Some Nomadic Alans settled in the region in the 7th century, forming the kingdom of Alania. It was eventually converted to Christianity by missionaries from Byzantium. Alania greatly profited from the Silk Road which passed through its territory.

After the Middle Ages, the Mongols' and Tartars' repeated invasions decimated the population, now known as the Ossetians. Islam was introduced to the region in the 17th century by Kabardians. Conflicts between the Khanate of Crimea and the Ottoman Empire eventually pushed Ossetia into an alliance with Imperial Russia in the 18th century. Soon, Russia established a military base in the capital, Vladikavkaz, making it the first Russian-controlled area in the northern Caucasus. By 1806, Ossetia was under complete Russian control. 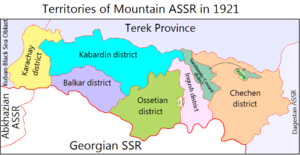 Border changes after World War I

The Russians' rule led to rapid development of industry and railways which overcame its isolation. The first books from the area came during the late 18th century, and became part of the Terskaya Region of Russia in the mid-19th century.

The North Ossetian SSR declared itself the autonomous republic of the Soviet Union on June 20, 1990. Its name was changed to Republic of North Ossetia-Alania in 1991.

The dissolution of the Soviet Union posed particular problems for the Ossetian people, who were divided between North Ossetia, which was part of the Russian SFSR, and South Ossetia, part of the Georgian SSR. In December 1990, the Supreme Soviet of Georgia abolished the autonomous Ossetian enclave amid the rising ethnic tensions in the region, and much of the population fled across the border to North Ossetia or Georgia proper. Some 70,000 South Ossetian refugees were resettled in North Ossetia, sparking clashes with the predominantly Ingush population in the Prigorodny District. That led to the Ossetian–Ingush conflict.

As well as dealing with the effects of the conflict in South Ossetia, North Ossetia has had to deal with refugees and the occasional spillover of fighting from the war in neighboring Chechnya. The bloodiest incident by far was the September 2004 Beslan hostage crisis, in which Chechen insurgents attributed to Shamil Basayev (who alternatingly denied and claimed responsibility) seized control of a school. In the firefight between the terrorists and Russian forces that ended the crisis, 335 civilians, the majority of them children, died. A physical education teacher called Yanis Kanidis (a Caucasus Greek, originally from Georgia) was also killed in the siege after saving the lives of many children. 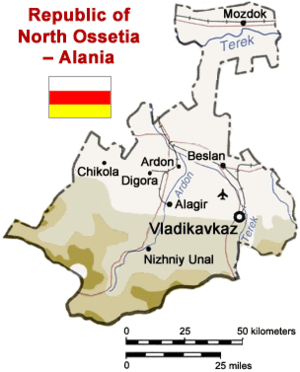 Map of the Republic of North Ossetia-Alania

In recent years, North Ossetia-Alania's economic development has been successful; the indicators of the republic's social and economic development in 2005–2007 revealed a stable growth of all sectors of the economy and major social parameters. The nature and climatic conditions of the republic contribute to the successful development of various economic sectors, which is compounded by the abundance of natural resources. Gross regional product pro capita of the region in 2006 was 61,000 rubles ($2,596), and increased 30% in the 2005–2007 time period.[15] GRP pro capita in 2007 was 76 455 rubles.[16] In 2005–2007, the average monthly wage in North Ossetia-Alania doubled, with the actual cash earnings increased by 42.5 percent. In terms of the average monthly wage growth, the republic ranks first in the North Caucasus.[15]

The regional government's economic priorities include industrial growth, development of small enterprise, spas, and resorts, and strengthening the budgetary and tax discipline.[17]

The most widespread resources are zinc- and lead-containing complex ores. There are deposits of limestone, dolomites, marble and touchstone. There is also a large availability of construction materials, such as clay, sand and gravel. The local oil deposit reserves are estimated at 10 million metric tons.[15]

Agricultural sector is varied and specializes in the cultivation of wheat, corn, and sunflowers; horticulture; viticulture; and cattle and sheep breeding.[18][19] 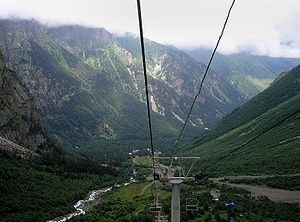 Despite the proximity to Chechnya, North Ossetia is making efforts to develop its tourist industry.[20] Projects under a program for spa, resort, and tourism development have been successfully implemented in the mountainous part of the republic, according to the head of the regional government.[17] There are nearly 3000 historical monuments in the republic and more than half of the its area is occupied bv Alania National Park, the North Ossetia National Preserve, and game preserves. There are more than 250 therapeutic, mineral, and freshwater springs in the republic with estimated daily reserves of 15,000 cubic meters. Besides providing the basis for health spas, these mineral waters also have the potential to be bottled and sold. North Ossetian mineral waters are known for their unique qualities, as well as special mineral composition.[19][20]

The majority of the population of North Ossetia are Christians who belong to the Russian Orthodox Church, although there is also a Muslim minority who are of Ossetian speaking origin.

There are two official languages in North Ossetia – Russian, which is official on all of the Russia's territory, and Ossetian. Ossetian is an Indo-European language, belonging to the East Iranian group. Russian, acting as a lingua franca in the region, but also native to many, is an East Slavic language and as such also belongs to the Indo-European family, which means the two languages are related, albeit extremely distantly. 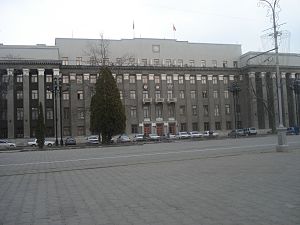 Seat of the Republic's Government

During the Soviet period, the high authority in the republic was shared between three people; the first secretary of the North Ossetia Communist Party of the Soviet Union (CPSU) Committee (who in reality had the biggest authority), the chairman of the oblast Soviet (legislative power), and the Chairman of the Republic Executive Committee (executive power). Since 1991, CPSU lost all the power, and the head of the Republic administration, and eventually the governor was appointed/elected alongside elected regional parliament.

The Charter of Republic of North Ossetia-Alania is the fundamental law of the region. The Parliament of North Ossetia-Alania is the republic's regional standing legislative (representative) body. The Legislative Assembly exercises its authority by passing laws, resolutions, and other legal acts and by supervising the implementation and observance of the laws and other legal acts passed by it. The highest executive body is the Republic's Government, which includes territorial executive bodies such as district administrations, committees, and commissions that facilitate development and run the day to day matters of the province. The Oblast administration supports the activities of the Governor who is the highest official and acts as guarantor of the observance of the krai Charter in accordance with the Constitution of Russia.

The head of government in the Republic of North Ossetia-Alania is the Head of the Republic. As of 2008, the head of the republic is Taymuraz Mamsurov. Mamsurov succeeded Alexander Dzasokhov, who voluntarily quit his post on May 31, 2005.[28]

There are six professional theaters in North Ossetia-Alania, as well as Ossetian State Philarmonia.