North West is a province of South Africa. Its capital is Mahikeng. The province is located to the west of the major population centre of Gauteng.

North West was created after the end of Apartheid in 1994, and includes parts of the former Transvaal Province and Cape Province, as well as most of the former Bantustan of Bophuthatswana. It was the scene of political violence in Khutsong, Merafong City Local Municipality in 2006 and 2007, after cross-province municipalities were abolished and Merafong Municipality was transferred entirely to North West. Merafong has since been transferred to Gauteng province in 2009.

The provincial government consists of a premier, an executive council of ten ministers, and a legislature. The provincial assembly and premier are elected for five-year terms, or until the next national election. Political parties are awarded assembly seats based on the percentage of votes each party receives in the province during the national elections. The assembly elects a premier, who then appoints the members of the executive council.

The premier of North West Province as of 21 May 2014 is Supra Mahumapelo[3] of the African National Congress. He replaced Thandi Modise as premier after the 2014 general election. 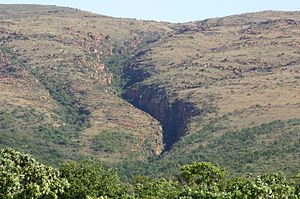 Much of the province consists of flat areas of scattered trees and grassland. The Magaliesberg mountain range in the northeast extends about 130 km (about 80 miles) from Pretoria to Rustenburg. The Vaal River flows along the southern border of the province.

North West Province is traversed by the northwesterly line of equal latitude and longitude. 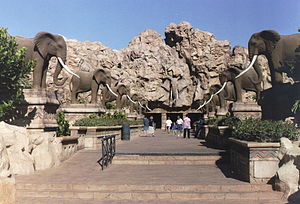 The Bridge of Time facing the Entertainment Centre

The mainstay of the economy of North West Province is mining, which generates more than half of the province's gross domestic product and provides jobs for a quarter of its workforce. The chief minerals are gold, mined at Orkney and Klerksdorp; uranium, mined at Klerksdorp; platinum, mined at Rustenburg and Brits; and diamonds, mined at Lichtenburg, Christiana, and Bloemhof. The northern and western parts of the province have many sheep farms and cattle and game ranches. The eastern and southern parts are crop-growing regions that produce maize (corn), sunflowers, tobacco, cotton, and citrus fruits. The entertainment and casino complex at Sun City and Lost City also contributes to the provincial economy.

The majority of the province's residents are the Tswana people who speak Tswana. Smaller groups include Afrikaans, Sotho, and Xhosa speaking people. English is spoken primarily as a second language. Most of the population belong to Christian denominations. (Figures according to Census 2001 released in July 2003).

According to the 2007 community survey 90.8% of the province's population was Black (mostly Tswana-speaking), 7.2% as White (mostly Afrikaans speaking), 1.6% as Coloured and 0.4% as Asian. The 2007 community survey showed the province had a population of just over 3 million. The province's white population is very unevenly distributed. In the southern and eastern municipalities, the white percentage in double figures such as the Tlokwe and Matlosana where the white percentages were 27% and 12% respectively.

As part of the Department of Education's proposed plans for higher education, the existing four higher learning institutions will be merged to form two. During 2003, as part of the Year of Further Education and Training project, three mega institutions, Taletso, ORBIT and Vuselela, were established to provide technical and vocational training to the youth. These institutions have been incorporated into many of the former education and technical colleges and manpower centres.