From Infogalactic: the planetary knowledge core
Jump to: navigation, search
For other uses, see Yorkshire North.

North Yorkshire is a county in England. It is a non-metropolitan or shire county located in the Yorkshire and the Humber region of England, and a ceremonial county primarily in that region but partly in North East England. Created in 1974 by the Local Government Act 1972[2] it covers an area of 8,654 square kilometres (3,341 sq mi), making it the largest ceremonial county in England. The majority of the Yorkshire Dales and the North York Moors lie within North Yorkshire's boundaries, and around 40% of the county is covered by National Parks. The largest settlements in North Yorkshire, in terms of their council areas, are York (153,717), Middlesbrough (138,400), Harrogate (73,576) and Scarborough (61,749); the county town is Northallerton with a population of 16,832.

The area under the control of the county council, or shire county, is divided into a number of local government districts; they are Craven, Hambleton, Harrogate, Richmondshire, Ryedale, Scarborough and Selby.[3]

The Department for Communities and Local Government did consider reorganising North Yorkshire County Council's administrative structure by abolishing the seven district councils and the county council to create a North Yorkshire unitary authority. The changes were planned to be implemented no later than 1 April 2009.[4][5] This was rejected on 25 July 2007 so the County Council and District Council structure will remain.[6]

York, Middlesbrough and Redcar and Cleveland are unitary authority boroughs which form part of the ceremonial county for various functions such as the Lord Lieutenant of North Yorkshire, but do not come under county council control. Uniquely for a district in England, Stockton-on-Tees is split between North Yorkshire and County Durham for this purpose. Middlesbrough, Stockton-on-Tees, and Redcar and Cleveland boroughs form part of the North East England region.[7]

The geology of North Yorkshire is closely reflected in its landscape. Within the county are the North York Moors and most of the Yorkshire Dales; two of eleven areas of countryside within England and Wales to be officially designated as national parks. Between the North York Moors in the east and the Pennine Hills in the west lie the Vales of Mowbray and York. The Tees Lowlands lie to the north of the North York Moors and the Vale of Pickering lies to the south. Its eastern border is the North sea coast. The highest point is Whernside, on the Cumbrian border, at 736 metres (2,415 ft).[8] The two major rivers in the county are the River Swale and the River Ure. The Swale and the Ure form the River Ouse which flows through York and into the Humber estuary. The River Tees forms part of the border between North Yorkshire and County Durham and flows from upper Teesdale to Middlesbrough and Stockton and to the coast.

North Yorkshire was formed on 1 April 1974 as a result of the Local Government Act 1972, and covers most of the lands of the historic North Riding, as well as the northern half of the West Riding, the northern and eastern fringes of the East Riding of Yorkshire and the former county borough of York.

York became a unitary authority independent of North Yorkshire on 1 April 1996,[9] and at the same time Middlesbrough, Redcar and Cleveland and areas of Stockton-on-Tees south of the river became part of North Yorkshire for ceremonial purposes, having been part of Cleveland from 1974 to 1996.

North Yorkshire is a non-metropolitan county that operates a cabinet-style council:[10] North Yorkshire County Council. The full council of 72 elects a council leader, who in turn appoints up to 9 more councillors to form the executive cabinet. The cabinet is responsible for making decisions in the County. The county council have their offices in the county hall in Northallerton.

The county is affluent and has above average house prices. Unemployment is below average for the UK and claimants of Job Seekers Allowance is also very low compared to the rest of the UK at 2.7%.[11] Agriculture is an important industry, as are mineral extraction and power generation. The county also has prosperous high technology, service and tourism sectors.[12]

This is a chart of trend of regional gross value added for North Yorkshire at current basic prices with figures in millions of British Pounds Sterling.[13]

North Yorkshire has a temperate oceanic climate, like most of the UK. However, there are large climate variations within the county. The upper Pennines border on a Subarctic climate, whereas the Vale of Mowbray has an almost Semi-arid climate. Overall, with the county being situated in the east, it receives below average rainfall for the UK, but the upper Dales of the Pennines are one of the wettest parts of England, where in contrast the driest parts of the Vale of Mowbray are some of the driest areas in the UK. Summer temperatures are above average, at 22 °C, but highs can regularly reach up to 28 °C, with over 30 °C reached in heat waves. Winter temperatures are below average, with average lows of 1 °C. Snow and Fog can be expected depending on location, with the North York Moors and Pennines having snow lying for an average of between 45 and 75 days per year.[14] Sunshine is most plentiful on the coast, receiving an average of 1650 hours a year, and reduces further west in the county, with the Pennines only receiving 1250 hours a year.

Settlements in italics lie only within the ceremonial county, not the administrative county.

Settlements in italics lie only within the ceremonial county, not the administrative county..

Settlements in italics lie only within the ceremonial county, not the administrative county.. 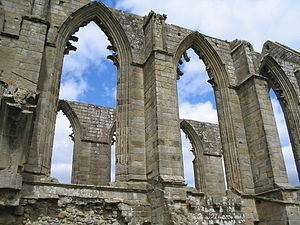 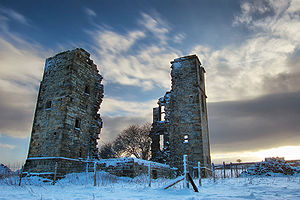 The main road through the county is the north-south A1/A1(M) which has gradually been upgraded to motorway status since the early 1990s. The only other motorways within the county are the short A66(M) near Darlington and a small stretch of the M62 motorway close to Eggborough.[3] The other nationally maintained trunk routes are the A168/A19, A64, the A66 and A174.

The East Coast Main Line (ECML) bisects the county stopping at Northallerton, Thirsk and York. Passenger services on the ECML within the county are operated by Virgin Trains East Coast, First TransPennine Express and Grand Central. First TransPennine Express run services on the York to Scarborough Line and the Northallerton–Eaglescliffe Line (for Middlesbrough) that both branch off the ECML.

Northern Rail operate the remaining lines in the county including commuter services on the Harrogate Line, Airedale Line and York & Selby Lines, of which the former two are covered by the Metro ticketing area. Remaining branch lines operated by Northern include the Yorkshire Coast Line from Scarborough to Hull, the Hull to York Line via Selby, the Tees Valley Line from Darlington to Saltburn and the Esk Valley Line from Middlesbrough to Whitby. Last but certainly not least, the Settle-Carlisle Line runs through the west of the county with services again operated by Northern.

The county suffered badly under the Beeching cuts of the 1960s. Places such as Richmond, Ripon, Tadcaster, Helmsley, Pickering and the Wensleydale communities lost their passenger services. Notable lines closed were the Scarborough and Whitby Railway, Malton and Driffield Railway and the secondary main line between Northallerton and Harrogate via Ripon.

Heritage railways within North Yorkshire include the North Yorkshire Moors Railway between Pickering and Grosmont, which opened in 1973, the Derwent Valley Light Railway near York, and the Embsay and Bolton Abbey Steam Railway. The Wensleydale Railway, which started operating in 2003, runs services between Leeming Bar and Redmire along a former freight-only line. The medium-term aim is to operate into Northallerton station on the ECML once agreement can be reached with Network Rail. In the longer term the aim is to reinstate the full line west via Hawes to Garsdale on the Settle-Carlisle line.

York railway station is the largest station in the county with 11 platforms and is a major tourist attraction in its own right. The station is immediately adjacent to the National Railway Museum.

There are no major airports in the county itself but nearby airports include Durham Tees Valley, Newcastle, Robin Hood Doncaster Sheffield and Leeds Bradford.

North Yorkshire is home to several football clubs, including Middlesbrough who play in the Championship and York City who play in League Two. Harrogate Town play in the Conference North. Whitby Town FC have reached the FA cup first round seven times, and have played the likes of Hull City, Wigan and Plymouth Argyle, they currently play in the Evo-Stik Premier league. Other lower league clubs include Harrogate Railway Athletic, Northallerton Town, Pickering Town, Scarborough Athletic, Selby Town and Tadcaster Albion.

No notable rugby union teams hail from the county but York City Knights are a rugby league team and play in the Rugby League Championship.

North Yorkshire is home to many racecourses; these include Catterick Bridge, Redcar, Ripon, Thirsk and York. It also has one motor racing circuit, Croft Circuit; the circuit holds meetings of the British Touring Car Championship, British Superbike and Pickup Truck Racing race series.

The ball game Rock-It-Ball was developed in the county.