In the 2007 election cycle, the CNMI House membership was increased from 18 to 20. Representatives serve two-year terms and are elected from seven election districts:

In the November 2007 general election, which elected the 16th House, Republicans won a majority (12 seats) and took control of the House in January 2008.

Composition of the House of Representatives 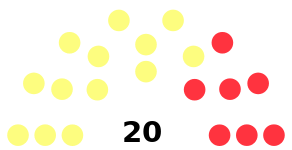