In the November 2007 elections, the three senators up for re-election were all re-elected to another four-year term in the 16th and 17th Senate. The Covenant Party, which lost control of the House, entered into coalition with the Democrats and a lone Independent over the Senate's leadership and voting agenda.

The CNMI Senate is currently controlled by a Republican majority under Senate President Franciso Borja.[1]

Maria Frica Pangelinan was the first woman to serve in the Senate.[2]

Composition of the Senate 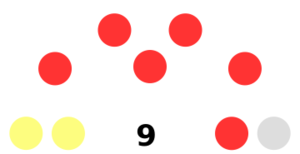