The Northwest Territories (NWT; French: les Territoires du Nord-Ouest, TNO; Athabaskan languages: Denendeh; Inuinnaqtun: Nunatsiaq; Inuktitut: ᓄᓇᑦᓯᐊᖅ) is a territory of Canada. With a population of 41,462 in 2011 and an estimated population of 43,537 in 2013, the Northwest Territories is the most populous territory in Northern Canada.[6][8] Yellowknife became the territorial capital in 1967, following recommendations by the Carrothers Commission.

The Northwest Territories, a portion of the old North-West Territory, entered the Canadian Confederation July 15, 1870, but the current borders were formed April 1, 1999, when the territory was subdivided to create Nunavut to the east, via the Nunavut Act and the Nunavut Land Claims Agreement Act.[9][10] While Nunavut is mostly Arctic tundra, the Northwest Territories has a slightly warmer climate and is mostly boreal forest (taiga), although portions of the territory lie north of the tree line, and its most northern regions form part of the Canadian Arctic Archipelago.

The Northwest Territories are bordered by Canada's two other territories, Nunavut to the east and Yukon to the west, and by the provinces of British Columbia, Alberta, and Saskatchewan to the south.

The name is descriptive, adopted by the British government during the colonial era to indicate where it lay in relation to Rupert's Land. It is shortened from North-Western Territory (see History). In Inuktitut, the Northwest Territories are referred to as ᓄᓇᑦᓯᐊᖅ (Nunatsiaq), "beautiful land."[11]

There was some discussion of changing the name of the Northwest Territories after the splitting off of Nunavut, possibly to a term from an Aboriginal language. One proposal was "Denendeh" (an Athabaskan language word meaning "our land"), as advocated by the former premier Stephen Kakfwi, among others. One of the most popular proposals for a new name – one to name the territory "Bob" – began as a prank, but for a while it was at or near the top in the public-opinion polls.[12][13]

In the end a poll conducted prior to division showed that strong support remained to keep the name "Northwest Territories". This name arguably became more appropriate following division than it had been when the territories actually extended far into Canada's north-central and northeastern areas.[14][15]

Located in northern Canada, the territory borders Canada's two other territories, Yukon to the west and Nunavut to the east, and three provinces: British Columbia to the southwest, and Alberta and Saskatchewan to the south. It possibly meets Manitoba at a quadripoint to the extreme southeast, though surveys have not been completed. It has a land area of 1,183,085 km2 (456,792 sq mi).[5]

Geographical features include Great Bear Lake, the largest lake entirely within Canada,[16] and Great Slave Lake, the deepest body of water in North America at 614 m (2,014 ft), as well as the Mackenzie River and the canyons of the Nahanni National Park Reserve, a national park and UNESCO World Heritage Site. Territorial islands in the Canadian Arctic Archipelago include Banks Island, Borden Island, Prince Patrick Island, and parts of Victoria Island and Melville Island. Its highest point is Mount Nirvana near the border with Yukon at an elevation of 2,773 m (9,098 ft). 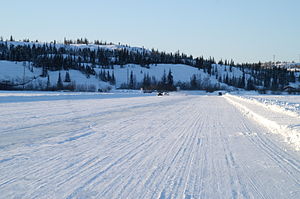 The Northwest Territories reaches for over 1,300,000 km2 (500,000 sq mi) so there is a large climate variant from south to north. The southern part of the territory (most of the mainland portion) has a subarctic climate while the islands and northern coast have a polar climate. 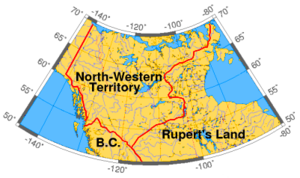 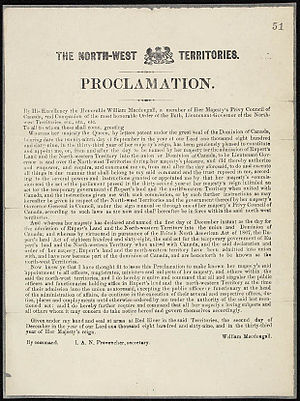 The present-day territory came under government authority in July 1870, after the Hudson's Bay Company transferred Rupert's Land and North-Western Territory to the British Crown, which subsequently transferred them to the government of Canada, giving it the name the North-West Territories. This immense region comprised all of today's Canada except that which was encompassed within the early signors of Canadian Confederation, that is, British Columbia, early forms of present-day Ontario and Quebec (which encompassed the coast of the Great Lakes, the Saint Lawrence River valley and the southern third of Quebec), the Maritimes (PEI, NS and NB), Newfoundland, the Labrador coast, and the Arctic Islands, except the southern half of Baffin Island (the Arctic Islands remained under direct British claim until 1880).[20]

After the 1870 transfer, some of the North-West Territories was whittled away. The province of Manitoba was created on July 15, 1870, at first a tiny square area around Winnipeg, and then enlarged in 1881 to a rectangular region composing the modern province's south. By the time British Columbia joined Confederation on July 20, 1871, it had already (1866) been granted the portion of North-Western Territory south of 60 degrees north and west of 120 degrees west, an area that comprised most of the Stickeen Territories.

In 1882, Regina in the District of Assiniboia became the territorial capital. Alberta and Saskatchewan were separated from the NWT to become provinces in 1905 (Regina became the provincial capital of Saskatchewan).

In 1876, the District of Keewatin, at the centre of the territory, was separated from the NWT. In 1882 and again in 1896, the remaining portion was divided into the following districts (corresponding to the following modern-day areas): 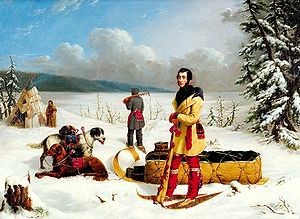 Keewatin was returned to the Northwest Territories in 1905.

In the meantime, the Province of Ontario was enlarged northwestward in 1882. Quebec was also extended northwards in 1898, and the Yukon was made a separate territory in that same year to deal with the Klondike Gold Rush, and also to remove the NWT's government from the burden of administering the sudden boom of population, economic activity, and the influx of non-Canadians.

The provinces of Alberta and Saskatchewan were created in 1905, and Manitoba, Ontario, and Quebec acquired the last addition to their modern landmass from the NWT in 1912. This left only the districts of Mackenzie, Franklin (which absorbed the remnants of Ungava in 1920), and Keewatin within what was then given the name Northwest Territories. In 1925, the boundaries of the NWT were extended all the way to the North Pole on the sector principle, vastly expanding its territory onto the northern ice cap.

On April 1, 1999, the eastern three-fifths of the Northwest Territories (including all of the District of Keewatin and much of that of Mackenzie and Franklin) became a separate Canadian territory named Nunavut.

The NWT is one of two jurisdictions in Canada – Nunavut being the other – where Aboriginal peoples are in the majority, constituting 50.3% of the population.[21] 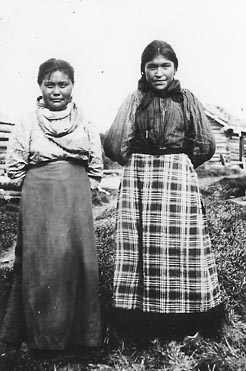 Population of the Northwest Territories since 1871[23] 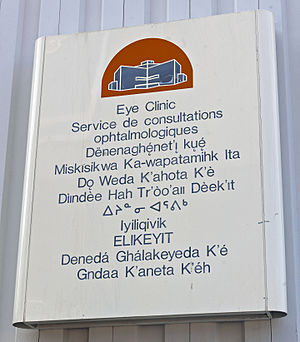 French was made an official language in 1877 by the territorial government. After a lengthy and bitter debate resulting from a speech from the throne in 1888 by Lieutenant Governor Joseph Royal the members of the day voted on more than one occasion to nullify and make English the only language used in the assembly. After some conflict with Ottawa and a decisive vote on January 19, 1892, the assembly members voted for an English-only territory.

In the early 1980s, the federal government pressured the government of the Northwest Territories to reintroduce French as an official language. Some Native members walked out of the assembly, protesting that they were not permitted to speak their own language. The executive council appointed a special committee to study the matter[citation needed], which decided that if French was to be an official language, then the other languages in the territories must also be allowed.

The Northwest Territories' Official Languages Act recognizes the following eleven official languages, which are more than in any other political division in the Americas:[2]

NWT residents have a right to use any of the above languages in a territorial court and in debates and proceedings of the legislature. However, laws are legally binding only in their French and English versions, and the NWT government only publishes laws and other documents in the territory's other official languages when the legislature asks it to. Furthermore, access to services in any language is limited to institutions and circumstances where there is significant demand for that language or where it is reasonable to expect it given the nature of the services requested. In practical terms, English language services are universally available, and there is no guarantee that other languages, including French, will be used by any particular government service except for the courts.

The 2006 census returns showed a population of 41,464. Of the 40,680 singular responses to the census question regarding each inhabitant's "mother tongue", the most reported languages were the following: 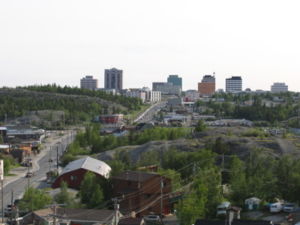 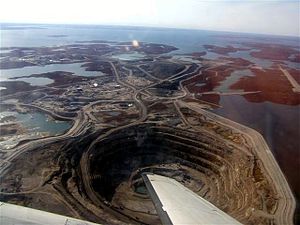 Diavik Diamond Mine in the North Slave Region 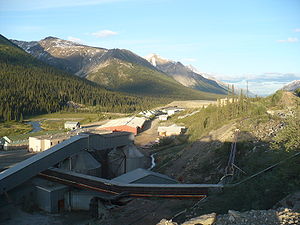 The NWT's geological resources include gold, diamonds, natural gas and petroleum. BP is the only oil company currently producing oil in the Territory. NWT diamonds are promoted as an alternative to purchasing blood diamonds.[38] Two of the biggest mineral resource companies in the world, BHP Billiton and Rio Tinto mine many of their diamonds from the NWT. In 2010, NWT accounted for 28.5% of Rio Tinto's total diamond production (3.9 million carats, 17% more than in 2009, from the Diavik Diamond Mine) and 100% of BHP's (3.05 million carats from the EKATI mine).[39][40]

The Northwest Territories has the highest per capita GDP of all provinces or territories in Canada, C$76,000 in 2009.[41] However, as production at the current mines started to wind down, no new mines opened and the public service shrank, the territory lost 1,200 jobs between November 2013 and November 2014.[42]

Main article: List of mines in the Northwest Territories 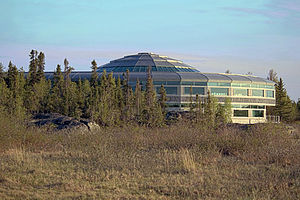 The Commissioner of the NWT is the chief executive and is appointed by the Governor-in-Council of Canada on the recommendation of the federal Minister of Aboriginal Affairs and Northern Development. The position used to be more administrative and governmental, but with the devolution of more powers to the elected assembly since 1967, the position has become symbolic. The Commissioner had full governmental powers until 1980 when the territories were given greater self-government. The Legislative Assembly then began electing a cabinet and Government Leader, later known as the Premier. Since 1985 the Commissioner no longer chairs meetings of the Executive Council (or cabinet), and the federal government has instructed commissioners to behave like a provincial Lieutenant Governor. Unlike Lieutenant Governors, the Commissioner of the Northwest Territories is not a formal representative of the Queen of Canada.

Unlike provincial governments and the government of Yukon, the government of the Northwest Territories does not have political parties, except for the period between 1898 and 1905. It is a consensus government called the Legislative Assembly. This group is composed of one member elected from each of the nineteen constituencies. After each general election, the new Assembly elects the Premier and the Speaker by secret ballot. Seven MLAs are also chosen as cabinet ministers, with the remainder forming the opposition.

In the Parliament of Canada, the NWT comprises a single Senate division and a single House of Commons electoral district, titled Northwest Territories (Western Arctic until 2014).

The Government of the NWT comprises the following departments:[45]

Aboriginal issues in the Northwest Territories include the fate of the Dene who, in the 1940s, were employed to carry radioactive uranium ore from the mines on Great Bear Lake. Of the thirty plus miners who worked at the Port Radium site, at least fourteen have died due to various forms of cancer. A study was done in the community of Deline, called A Village of Widows by Cindy Kenny-Gilday, which indicated that the number of people involved were too small to be able to confirm or deny a link.[46][47][48][49]

There has been racial tension based on a history of violent conflict between the Dene and the Inuit,[50] who have now taken recent steps towards reconciliation.

Land claims in the NWT began with the Inuvialuit Final Agreement, signed on June 5, 1984. It was the first Land Claim signed in the Territory, and the second in Canada.[51] It culminated with the creation of the Inuit homeland of Nunavut, the result of the Nunavut Land Claims Agreement, the largest land claim in Canadian history.[52]

Another land claims agreement with the Tłı̨chǫ people created a region within the NWT called Tli Cho, between Great Bear and Great Slave Lakes, which gives the Tłı̨chǫ their own legislative bodies, taxes, resource royalties, and other affairs, though the NWT still maintains control over such areas as health and education. This area includes two of Canada's three diamond mines at Ekati and Diavik.[53]