The Royal Norwegian Air Force (RNoAF) (Norwegian: Luftforsvaret) is the air force of Norway. It was established as a separate arm of the Norwegian armed forces on 10 November 1944. The RNoAF's peacetime establishment is approximately 1,430 employees (officers, enlisted staff and civilians). 600 personnel also serve their draft period in the RNoAF. After mobilization the RNoAF would consist of approximately 5,500 personnel.

The infrastructure of the RNoAF includes seven airbases (at Andøya, Bardufoss, Bodø, Gardermoen, Rygge, Sola and Ørland), two control and reporting centres (at Sørreisa and Mågerø) and three training centres (at Kjevik in Kristiansand and Persaunet in Trondheim) and at KNM HH/Madlaleiren (Stavanger).

Military flights started on 1 June 1912. The first plane, HNoMS Start, was bought with money donated by the public and piloted by Hans Dons, second in command of the submarine HNoMS Kobben (A-1).[2] Up until 1940 most of the aircraft belonging to the Navy and Army air forces were domestic designs or built under license agreements, the main bomber/scout aircraft of the Army air force being the Dutch-origined Fokker C.V. 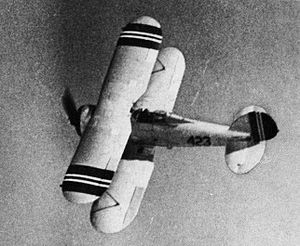 In the late 1930s, as war seemed imminent, more modern aircraft was bought from abroad, including twelve Gloster Gladiator fighters from the UK, and six Heinkel He 115s from Germany. Considerable orders for aircraft were placed with United States companies during the months prior to the invasion of Norway on 9 April 1940.

The most important of the US orders were two orders for comparatively modern Curtiss P-36 Hawk monoplane fighters. The first was for 24 Hawk 75A-6 (with 1200 hp Pratt & Whitney R-1830-SC3-G Twin Wasp engines), 19 of which were delivered before the invasion. Of these 19, though, none were operational when the attack came. A number were still in their shipping crates in Oslo harbour, while others stood at the Kjeller aircraft factory, flight ready, but none combat ready. Some of the Kjeller aircraft had not been fitted with machine guns, and those that had been fitted still lacked gun sights.

The ship with the last five 75A-6s that were bound for Norway was diverted to the United Kingdom, where they were taken over by Royal Air Force (RAF). All 19 Norwegian P-36s that were captured by the German invaders were later sold by the German authorities to the Finnish Air Force, which was to use them to good effect during the Continuation War.

The other order for P-36s was for 36 Hawk 75A-8 (with 1200 hp Wright R-1820-95 Cyclone 9 engines), none of which were delivered in time for the invasion, but were delivered to "Little Norway" near Toronto, Ontario, Canada. There they were used for training Norwegian pilots until the USAAF took over the aircraft and used them under the designation P36G.

Also ordered prior to the invasion were 24 Northrop N-3PB float planes built in on Norwegian specifications for a patrol bomber. The order was made on 12 March 1940 in an effort to replace the Royal Norwegian Navy Air Service's obsolete MF.11 biplane patrol aircraft. None of the type were delivered by 9 April and when they became operational with the 330 (Norwegian) Squadron in May 1941 they were stationed at Reykjavík, Iceland performing anti-submarine and convoy escort duties.

The unequal situation led to the rapid defeat of the Norwegian air forces, even though seven Gladiators from Jagevingen (the fighter wing) defended Fornebu airport against the attacking German forces with some success – claiming two Me 110 heavy fighters, two He 111 bombers and one Junkers Ju 52 transport. Jagevingen lost two Gladiators to ground strafing while they were rearming on Fornebu and one in the air, shot down by Future Experte Helmut Lent, injuring the sergeant pilot. After the withdrawal of allied forces, the Norwegian Government ceased fighting in Norway and evacuated to the United Kingdom on 10 June 1940. 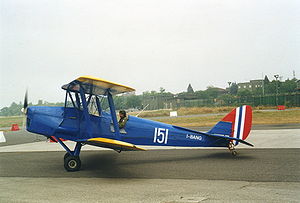 Only aircraft of the Royal Norwegian Navy Air Service had the range to fly all the way from their last remaining bases in Northern Norway to the UK. Included amongst the Norwegian aircraft that reached the British Isles were four German-made Heinkel He 115 seaplane bombers, six of which were bought before the war and two more were captured from the Germans during the Norwegian Campaign. One He 115 also escaped to Finland before the surrender of mainland Norway, as did three M.F. 11s; landing on Lake Salmijärvi in Petsamo. A captured Arado Ar 196 originating from the German heavy cruiser Admiral Hipper was also flown to Britain for testing.

For the Norwegian Army Air Service aircraft the only option for escape was Finland, where the planes would be interned but at least not fall into the hands of the Germans. In all two Fokker C.V.s and one de Havilland Tiger Moth made it across the border and onto Finnish airfields just before the capitulation of mainland Norway. All navy and army aircraft that fled to Finland were pressed into service with the Finnish Air Force,[3] while most of the aircrew eventually ended up in "Little Norway".

The Army and Navy air services established themselves in Britain under the command of the Joint Chiefs of Staff. Norwegian air and ground crews operated as part of the British Royal Air Force, in both wholly Norwegian squadrons and also in other squadrons and units such as RAF Ferry Command and RAF Bomber Command. In particular, Norwegian personnel operated two squadrons of Supermarine Spitfires: RAF 132 (Norwegian) Wing consisted of No. 331 (Norwegian) Squadron and RAF No. 332 (Norwegian) Squadron. Both planes and running costs were financed by the exiled Norwegian government.

In the autumn of 1940, a Norwegian training centre known as "Little Norway" was established next to Toronto Island Airport, Canada.

The Royal Norwegian Air Force (RNoAF) was established by a royal decree on 1 November 1944, thereby merging the Army and Navy air forces. No. 331 (Norwegian) Squadron defended London from 1941 and was the highest scoring fighter squadron in South England during the war.

Up until 8 May 1945, 335 persons had lost their lives while taking part in the efforts of the RNoAF. 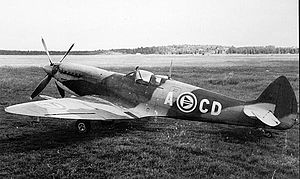 After the war the Spitfire remained in service with the RNoAF into the fifties.

In 1947, the Surveillance and Control Division acquired its first radar system, and around the same time the RNoAF got its first jet fighters in the form of de Havilland Vampires.

In 1949 Norway co-founded NATO, and soon afterwards received American aircraft through the MAP (Military Aid Program). The expansion of the Air Force happened at a very rapid pace as the Cold War progressed. Throughout the Cold War the Norwegian Air Force was only one of two NATO air forces — Turkey being the other — with a responsibility for an area with a land border with the Soviet Union, and Norwegian fighter aircraft had on average 500–600 interceptions of Soviet aircraft each year.[4]

In 1959, the Anti-Aircraft Artillery was integrated into the Royal Norwegian Air Force.

In 1999, Norway participated with a number of F-16s during operation 'Allied Force',[5]

In October 2002, a tri-national force of 18 Norwegian, Danish, and Dutch F-16 fighter-bombers, with one Dutch Air Force KC-10A tanker, flew to the Manas Air Base in Kyrgyzstan, to support the NATO ground forces in Afghanistan as a part of the Operation Enduring Freedom. One of the missions was Operation Desert Lion.[6]

Libyan no-fly zone : – In a statement, Foreign Minister Jonas Gahr Støre condemned the violence against "peaceful protesters in Libya, Bahrain and Yemen", saying the protests "are an expression of the people’s desire for more participatory democracy. The authorities must respect fundamental human rights such as political, economic and social rights. It is now vital that all parties do their utmost to foster peaceful dialogue on reforms.".[8] On 19 March 2011 the Norwegian government authorized The Royal Norwegian Air Force to head for Libya and prepare for missions there. Norway has approved six General Dynamics F-16 Fighting Falcon fighters and necessary personnel. These fighters will head for Greece on 21 March and operate from the Souda Air Base in Souda Bay on Crete .[9] On 24 March 2011, F-16s from the Royal Norwegian Air Force was assigned to the United States Africa Command and the Operation Odyssey Dawn. A number of Norwegian F-16s took off from their base in Greece for their first mission over Libya.[10][11] On 25 March 2011, 3 laserguided bombs were launched from 2 F-16s of the Royal Norwegian Air Force against Libyan tanks and during the night towards 26 March an airfield was bombed. . Equipment also deployed to Operation Unified Protector on 26 March 2011.[12][13] By July 2011 the Norwegian F-16's had dropped close to 600 bombs, some 17% of the total bombs dropped at that time.[14][15][16] It was Norwegian F-16s that on the night towards 26 April, bombed Gaddafis headquarter in Tripoli[15][17][18][19]

From September to December 2011, the Air Force contributed personnel and one P-3 Orion to Operation Ocean Shield. Operating from the Seychelles, the aircraft searched for pirates in the Somali Basin.[20][21]

In April 2016 the life of a patient, at the hospital in Bodø, was saved when specialised medical equipment was ferried halfway across Norway, in less than half an hour, by an Air Force F-16 jet from Værnes Air Station.[22]

On 13 April one of two F-16s participating in an air-to-ground training mission, mistakenly attacked one of the control towers at the range. Three officers, who were inside the tower at the time, said they did not have time to react. An investigation was launched.[23]

The RNoAF will conduct several investments in the coming years. First the European helicopter NH-90 will be introduced to replace the Lynx helicopters as a ship-borne helicopter, the Air Force also have bought an additional 16 Search and rescue Augusta-Westland AW101 helicopters to replace its aging Sea King helicopters. The aging F-16AM fighter will be replaced from 2016. On 20 November 2008, the prime minister of Norway Jens Stoltenberg announced that the F-35A was the only fighter fulfilling all the Norwegian requirements and thus the preferred choice . Stoltenberg stated that cooperation with the Nordic countries on defence and security would continue independently of the F-35 purchase.[24]

According to the 2012 White paper, a number of changes are proposed:[25]

In 2016 research was started to consider the Boeing P-8A Poseidon MMA to replace the aging P-3C Orion aircraft.

The RNoAF is organized in ten Air Wings. These are divided into a total of two Control and Reporting Centres, nine flying squadrons as well as two anti aircraft units. 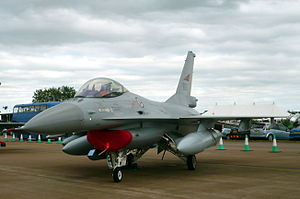 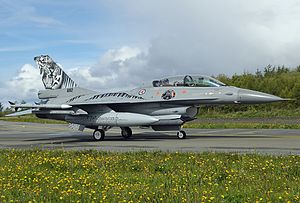 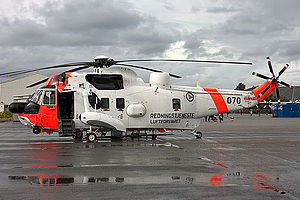 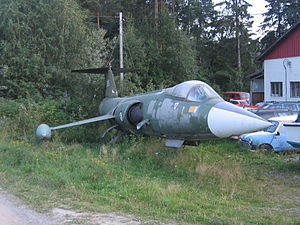 A old Canadair CF-104 Starfighter of the 334 squadron 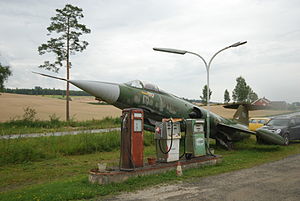 The same Canadair CF-104 plane at its new location 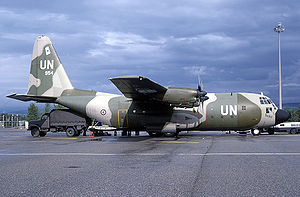 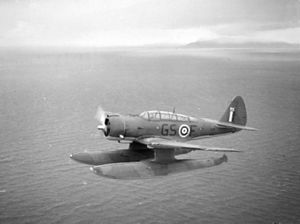