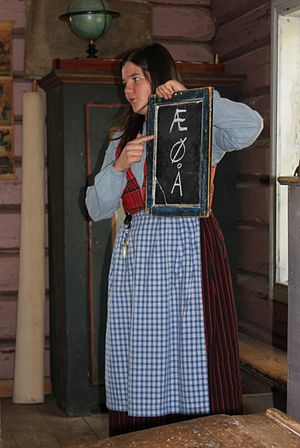 Norwegian orthography is the method of writing the Norwegian language, of which there are two written standards: Bokmål and Nynorsk. While Bokmål has for the most part derived its forms from the written Danish language or the common Danish-Norwegian speech, Nynorsk gets its orthographical standards from Aasen's reconstructed "base dialect", which are intended to represent the distinctive dialectical forms. Both standards use a 29-letter variant of Latin alphabet.

The Norwegian alphabet is based upon the Latin alphabet and is identical to the Danish alphabet. Since 1917 it has consisted of the following 29 letters.

The letters c, q, w, x and z are not used in the spelling of indigenous Norwegian words. They are rarely used; loanwords routinely have their orthography adapted to the native sound system.

Norwegian (especially the Nynorsk variant) also uses several letters with diacritic signs: é, è, ê, ó, ò, â, and ô. The diacritic signs are not compulsory,[1] but can be added to clarify the meaning of words (homonyms) which otherwise would be identical. One example is ein gut ("a boy") versus éin gut ("one boy"). Loanwords may be spelled with other diacritics, most notably ü, á, à and é,[citation needed] following the conventions of the original language. The Norwegian vowels æ, ø and å never take diacritics.

The diacritic signs in use include the acute accent, grave accent and the circumflex. A common example of how the diacritics change the meaning of a word, is for:

The letter Å (HTML &aring;) was introduced in Norwegian in 1917, replacing Aa or aa. The new letter came from the Swedish alphabet, where it has been in official use since the 18th century. The former digraph Aa still occurs in personal names. Geographical names tend to follow the current orthography, meaning that the letter å will be used. Family names may not follow modern orthography, and as such retain the digraph aa where å would be used today. Aa remains in use as a transliteration, if the letter is not available for technical reasons. Aa is treated like Å in alphabetical sorting, not like two adjacent letters A, meaning that while a is the first letter of the alphabet, aa is the last. This rule does not apply to non-Scandinavian names, so a modern atlas would list the German city of Aachen under A but list the Danish town of Aabenraa under Å.

The difference between the Dano-Norwegian and the Swedish alphabet is that Swedish uses the variant Ä instead of Æ, and the variant Ö instead of Ø — similar to German. Also, the collating order for these three letters is different: Å, Ä, Ö. 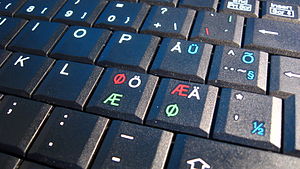 In computing, several different coding standards have existed for this alphabet: