Nostalgia for the Soviet Union 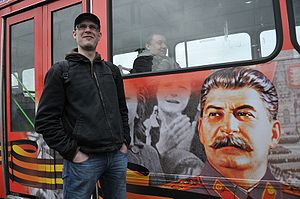 It results mainly from the frustration Russia experienced after the dissolution of the Soviet Union.

Subsequently, the economy was changed from a socialist planned economy to capitalism, which eventuated the rise of Russian oligarchs.(see Gazprom).

The living standard subsequently fell and gave rise to a renaissance of Russian nationalism.

On April 25, 2005 the President of Russia, Vladimir Putin, stated that the dissolution of the Soviet Union was a major geopolitical disaster of the 20th century.[4][5][6][7]

For more details on this topic, see Neo-Stalinism.

Since 2009 in Ukraine, the Communist Party of Ukraine, has actively tried to revive the cult of Joseph Stalin.[8][9][10][11] On 22 June 2013, Serhiy Topalov, a People's Deputy from the Communist Party, attacked a law enforcement agent over a portrait of Stalin.[12]