Nouakchott (/nwɑːkˈʃɒt/, Arabic: نواكشوط‎‎ Nuwākshūṭ, originally derived from Berber Nawākšūṭ, "place of the winds")[1] is the capital and by far the largest city of Mauritania. It is one of the largest cities in the Sahara.[2] The city is the administrative and economic centre of Mauritania.

Nouakchott was a small village of little importance until 1958, when it was chosen as the capital of the nascent nation of Mauritania. It was designed and built to accommodate 15,000 people, but droughts since the 1970s have displaced a vast number of Mauritanians, who resettled in Nouakchott. This caused rapid urban growth and overcrowding, with the city having an estimated population of 2 million in 2008 despite the official figures being under a million. The resettled population inhabited slum areas under poor conditions, but the living conditions of a portion of these inhabitants have since been ameliorated.

Nouakchott is the hub of the Mauritanian economy and is home to a port that handles 500,000 tonnes of cargo per year and one of the country's two international airport (the other is Nouadhibou, the country's second largest city and a major port, in the north. A significant part[vague] of the population had lead a nomadic lifestyle, but massive droughts in the 1970s and following years brought about significant urbanization, with many former nomads setting up tents and relocating within the city. The city hosts the University of Nouakchott and several markets.

A tiny, fortified fishing village (ksar)[3] of 200 people[4] until 1958, Nouakchott was little mentioned during pre-colonial and colonial history. It is possible that the Berber Muslim Almoravids were originally from the area. As Mauritania prepared for independence, it lacked a capital city and the area of present-day Nouakchott was chosen by Ould Daddah and his advisors.[3] Despite its name, based on a Berber expression meaning "place of the winds",[1] the city was selected as the capital city for its moderate climate and central location in the country.[5] It also sat on one of the most valuable trade routes to West Africa.[1]

Mauritania was part of the larger French colony of French West Africa and, as such, had no capital during the colonial period: Saint-Louis, in Senegal, held that position. In 1957, this small port town was chosen to be the capital of the new country, and an ambitious building program was begun to increase its population to 15,000, starting a year later.[6] Nouakchott was still planned with the expectation that commerce and other economic activities would not take place in the city.[3] In 1958, Mauritania was formed as an autonomous republic in the French Community, and in 1960 it became an independent country, with Nouakchott as its capital.

Nouakchott's central business was planned with broad streets and a grid-like structure, the fifth district was located close to this area and became the location of a large open-air market and residential area within a few years. During the 1960s, the city obtained its own local government. By the 1970s, these new areas had grown so much that they replaced the old ksar in terms of importance, as they also hosted the governmental buildings and state enterprises.[3]

The city was attacked in 1976 by the Polisario Front, as part of the Western Sahara independence movement.[7] Between 1988 and 1989, racial tensions between Arabs and blacks escalated. There was discrimination and retaliation by Arabs and blacks.[8]

There is currently a large amount of Chinese investment in Mauritania that is focused on the city.[1]

Located on the Atlantic coast of the Sahara Desert, it lies on the west coast of Africa, on the Atlantic Ocean. With the exception of Nouakchott Wharf and a deep water port, the coastal strip is mostly left empty and allowed to flood. The coastline includes shifting sandbanks and sandy beaches.[1] There are areas of quicksand close to the harbour.[10] Nouakchott is being covered by the sand dunes advancing from its eastern side (salmon-coloured on image to left), which pose a daily problem.[11] There have been efforts to save particular areas, including work by Jean Meunier.[12] The city is largely flat.[7]

Owing to the rapid build-up, the city is quite spread out, with few tall buildings. Most buildings are one-story.[7] Nouakchott often acts as an interface between urban Mauritanians and their nomadic fellow citizens.

Nouakchott is built around a large tree-lined street, Avenue Gamal Abdel Nasser, which runs northeast through the city centre from the airport. It divides the city into two, with the residential areas in the north and the medina quarter, along with the kebbe, a shanty town formed due to the displacement of people from other areas by the desert.[13] Other major streets are named (in French) for notable Mauritanian or international figures of the 1960s: Avenue Abdel Nasser, Avenue Charles de Gaulle, Avenue Kennedy, and Avenue Lumumba, for example.[14]

The kebbe consists of cement buildings that are built overnight and made to look permanent to avoid destruction by the authorities. In 1999, it was estimated that more than half of the city's 1.1 million inhabitants lived in the area in tents and shacks, which were used for residential as well as business purposes.[15]

Another source with different averages. 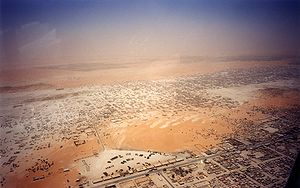 Nouakchott is divided into three regions (wilayat), each of which contains three departments (moughataa):

The town was initially divided into four departments in 1973. In 1986 the current nine departments were created.[19]

Formerly a district, in 1990 Nouakchott became a region of Mauritania.[20] On 25 November 2014, it was split into the three current regions[21] and its governor Mahi Ould Hamed became the first governor of Nouakchott-Nord.[22]

For comparison, its population was only 20,000 in 1969 and 150,000 in 1980. Part of the difficulty in estimating the city's population is that part of it is nomadic, setting up tents in suitable locations, then packing up when the need strikes. Some estimates put the 2008 population at over 2 million; more conservative estimates put that number at 800,000, estimated to be close to one-third of the country's population.[9]

In 2009, the government of Mauritania announced that it would begin a process of clearing the slum on the outskirts of Nouakchott. 24,000 families would eventually be relocated to planned housing in the city. The process was scheduled to begin with the relocation of 9,000 families from the outskirts into the poor Arafat department neighbourhood of "Kosovo", popularly named for its high crime rate and poor services. The government planned to begin moving families in June 2009 despite concerns from aid agencies that needed infrastructure cannot be put in place in the receiving neighbourhood.[23] In 2013, it was reported that "slums have been replaced by social dwellings for the poorest",[24] with the World Bank reporting that the plan met with substantial success, resulting in the access of 181,035 people in the slum areas to improved services.[25]

Road transport is problematic, the main problem being overcrowding. Fuel for cars is hard to obtain in Nouakchott.[27] In the city, there is a public transport and commuter system, with vehicles serving major boulevards.[15]

An agreement was signed on August 5, 2007 between Mauritania, Sudan, and China to build a $630 million Mauritania railway linking the port of Nouakchott and phosphate mines at Bofal, about 430 km (270 mi) away. The line goes near the border with Senegal.

As of 2000[update], it is the home to over 30 international or diplomatic institutions.[4]

Although the rocks beneath the city contained a vast reservoir of fresh water, known as the Trarza Lake, it is running out, owing to the large growth of the city.[28] Engineers have warned it could run out by 2054, since it is not rain-fed, and is therefore non-renewable. The problem is particularly bad in the sandy shanty towns where the majority of the population lives.[28]

Many people already have to buy water, which is expensive compared with the average wage.[28]

Salt, cement, insecticides, rugs, carpets, embroidery, and craft products are produced in Nouakchott, with the port also exporting copper.[29] In 2000, there were over 30 small or middle-size factories in the city.[4] Administration and financial enterprises are also important.[7] There is a large sugar refinery in the city, which has been active since 1977.[30] When Air Mauritanie existed, its head office was in the city.[31]

Nouakchott is the center of the Mauritanian economy, with three-quarters of service sector enterprises located in the city as of 1999. As of 1999, 90% of the city's economic activity consisted of informal transactions. Some inhabitants have multiple addresses and maintain strong ties with their regions of origin, at times returning for labor.[15]

The city is home to the University of Nouakchott,[32] which is the only university in Mauritania and was opened in 1981. Approximately 8000 students study there; it has a considerable impact on the city, according to some.[whom?] Other higher education facilities include the National School of Administration and the National Institute of Advanced Islamic Studies. 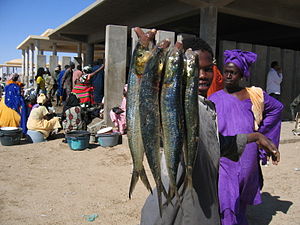 Attractions in Nouakchott include the National Museum of Mauritania, several markets including Nouakchott Silver Market, and the beaches.[14] One beach is devoted to fishing boats where fish can be bought fresh. The city hosts the National Library and National Archives. Nouakchott is the principal location in Africa for world distribution of native Saharan meteorites.

There is a mosque donated by Saudi Arabia in the city centre and a Moroccan mosque further south.[9] Although Islam is the state religion in Mauritania, Nouakchott includes the Catholic Cathedral of St. Joseph. It is home to the Roman Catholic Diocese of Nouakchott, founded in 1965.[35]

Nouakchott is twinned with: