Novgorod Governorate (Russian: Новгоро́дская губе́рния, Novgorodskaya guberniya, Government of Novgorod), was an administrative division (a guberniya) of the Russian Empire, which existed from 1727 to 1776 and from 1796 to 1927. Its administrative center was in the city of Novgorod. The governorate was located in the northwest of the Russian Empire. 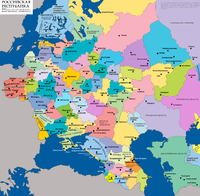 The European part of the Russian Republic in 1917. Novgorod Governorate is shown as the cyan area in the top part of the map.

In 1727, the description of Novgorod Governorate's borders was not given. Instead, the territory was defined as a set of cities and the lands adjacent to those cities. The cities were[2]

In 1764, Jacob Sievers was appointed governor of Novgorod. He discovered that most of the towns in the governorate were located along the western border and were in fact former fortresses, whereas large spaces like for instance between Novgorod and Ustyuzhna, had no towns at all. The general policy of Catherine the Great at the time was to diminish the number of towns and to create large uyezds, and in 1764, most of the uyezds were abolished, however, Sievers argued that this policy was not appropriate for Novgorod Governorate, since it was large, sparsely populated, and difficult to administer. He suggested that Vyshny Volochyok, Valday, Borovichi, and Ostashkov would be chartered instead. In 1770, these towns were indeed chartered.[2]

Novgorod Governorate bordered Poland in the west until 1772. In 1772, as a result of the First Partition of Poland, parts of Livonia and eastern Belarus were transferred to Russia. In order to accommodate these areas, Pskov Governorate was created, and Velikiye Luki and Pskov Provinces (with the exception of future Gdovsky Uyezd) were transferred to this governorate. In 1773, Olonetsky Uyezd was incorporated as Olonets Province but still remained in Novgorod Governorate. The province consisted of three uyezds with the centers in Olonets, Vytegra, and Padansky Pogost. In the same year, Porkhovsky, Gdovsky, Ladozhsky, Starorussky, and Tikhvinsky Uyezds were established.[2]

By 1775, Novgorod Governorate was subdivided as follows:

In 1796, after the governorate was restored, it consisted of eleven uyezds,[1]

In 1816, Novgorod Governorate became the area where military settlements were deployed, in accordance with the project designed by Aleksey Arakcheyev, an influential statesman. It was inconvenient to have both civial and military administration in Staraya Russa, and therefore Starorussky Uyezd was abolished in 1824. The town of Staraya Russa and some adjacent territories were directly subordinated to the Defense Ministry. Simultaneously, Demyansk was chartered, and Demyansky Uyezd was established. Military settlements were established in Novgorodsky, Demyansky, and Krestetsky Uyezds. The military settlements were proven inefficient, in particular, in 1831, the area participated in the Cholera Riots. They were abolished in 1856. In 1857, Starorussky Uyezd was re-established.[1]

Thus, by 1927 the governorate consisted of the following six uyezds:

The administration of the governorate was performed by a governor. The governors of Novgorod Governorate were[4]

In 1809, Duke George of Oldenburg was appointed governor general and supervised Novgorod, Tver, and Yaroslavl Governorates. In 1812, he died, and the position of the governor general was abolished.[5]