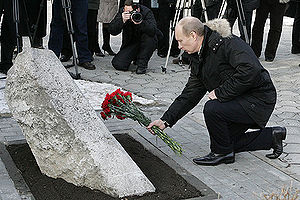 President of Russia Vladimir Putin lays flowers, on 1 February 2008, at the memorial to the victims of the massacre.

The Novocherkassk massacre[1] refers to events tied to the labor strike of a locomotive building plant in Novocherkassk, a city in the Soviet Union, (now Russia). The events eventually culminated in riots of June 1-2, 1962 when reportedly 26 protesters were killed by Soviet Army troops, and 87 were wounded.

The riots were a direct result of shortages of food and provisions, as well as the poor working conditions in the factory. The protest began on June 1 in the Budyonny Electric Locomotive Factory, when workers from the foundry and forge shops stopped work after factory management refused to hear their complaints. The strike and attendant discussions had spread throughout the whole factory by noon.

The unrest began when Nikita Khrushchev raised the prices of meat and butter throughout the Soviet Union on June 1st. On the same day, as demanded by another and quite separate economic plan, the minimum production quotas for each worker at the factory were increased,[2] thereby effectively reducing pay rates.[3] This culminated in a march on the town hall and police headquarters, and the strike spread to other enterprises after police arrested thirty workers.

Accounts of the government response are varied and often conflicting. There is some debate over who exactly fired on the demonstrators: the Soviet Army or the KGB. Some say that one army officer refused to order his men to fire on the protesters, and that KGB warning shots fired into the air which hit children who had climbed into trees.[3]

According to now available official sources, 26 protesters were killed by the machine-gun-equipped[4][5] Soviet Army troops, and 87 were wounded with 3 of those dying later of their wounds. After the initial demonstrations, a curfew was implemented in the town. The dead bodies were secretly buried in the cemeteries of other towns of the Rostov Oblast. However, the following morning, a large group of several hundred demonstrators again gathered in the square. One hundred and sixteen were arrested, of which fourteen were convicted by show trials, seven of those receiving a death sentence and were executed. The others were sentenced to prison terms of ten to fifteen years.[6]

Following the incident, the Soviet government directed extra food supplies to the region and began an investigation. Additional arrests of workers followed, as did courts martial of military officials involved. Aleksandr Solzhenitsyn claimed that individuals wounded in the unrest and their families were exiled to Siberia.

The whole story was never allowed to appear in the press or any other Soviet mass media and remained classified until 1992, when the remains of 20 bodies were recovered and identified in 1992 and buried in the cemetery of Novoshakhtinsk.

The massacre is dramatized in Francis Spufford's "Red Plenty".

During a politburo scene in The Devil's Alternative by author Frederick Forsyth, the KGB chief, asked if he could suppress riots during famine, responds that the KGB could suppress ten, even twenty Novocherkassks; but not fifty - intentionally using the example to highlight how serious the difficulties would be that the Soviet Union finds itself in the novel.