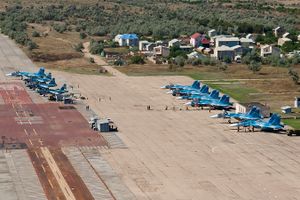 It is located about 3 kilometres (1.9 mi) south of the regional centre of Saky, and about 70 kilometres (43 mi) north of Sevastopol. Formerly a base of Soviet Naval Aviation as "Saky-4", it came under the Ukrainian Navy control with the breakup of the Soviet Union. It was captured by Russian forces without resistance on March 22, 2014.[3]

At the time of the Yalta Conference in February 1944 during World War II, President Franklin D. Roosevelt's and Prime Minister Winston Churchill's aircraft landed on the airfield. Later the airfield played an important role in the work of the Center for Deep Space Communications near Yevpatoriya.[4]

The Soviet Black Sea Fleet used Novofyodorovka as a major air base. The base was also home to the only Soviet aircraft carrier shore-based landing, trainer and test site, the Nazyemniy Ispitateiniy Treynirovochniy Kompleks Aviatsii (NITKA), with arresting gear and a ski-jump ramp that was a full-sized replica of the bow of the Admiral Kuznetsov.

The flying unit at the base appears to have been the 1063rd Center for Combat Employment Shipborne Aviation from 1988 to 1992.[5]

During the 2008 South Ossetia War, the President of Ukraine, Viktor Yushchenko, stopped Russian pilots from using the carrier training facilities. This decision was reversed in April 2010.[6] Meanwhile, the Russian Navy had begun to build a similar facility at Yeysk in the Krasnodar Krai region by the Sea of Azov.[6]

During the 2014 Crimean Crisis, Russian forces occupied the base. The Ukrainian 10th Saki Naval Aviation Brigade, controlling all the Ukrainian Navy's air units, managed to get a number of its aircraft airborne to bases in mainland Ukraine on March 5, 2014.[8] However, more than a dozen aircraft and helicopters undergoing maintenance had to be abandoned.

A day later, the Ukrainian defense ministry announced the shooting death of a Ukrainian Naval officer in the village of Novofedorivka.[9]

The incident took place outside the Novofedorivka Air Base in the military dormitory building, which was occupied by Ukrainian servicemen and their families that were awaiting relocation to mainland Ukraine. While Ukrainian Navy major Stansilav Karachevsky of the military unit No. 1100 was preparing his belongings in preparation to leave Crimea, an altercation between him and several soldiers on both sides broke out.[10][11]

The scuffle escalated to where Russian Spetsnaz Sergeant E.S. Zaitsev shot the unarmed officer twice in the head at point blank range with an AK-74 assault rifle on the 5th floor of the dormitory building where Russian soldiers were evacuating the troops. Major Karachevsky was pronounced dead immediately.

A second Ukrainian personnel, identified as Captain Artem Yermolenko, was beaten and abducted by Russian soldiers. Russian sources confirmed the death of a Ukrainian major perpetrated by one of its sergeants, but it said that it was an incident where a group of drunk Ukrainian soldiers on their way to the sleeping quarters encountered Russian soldiers manning a checkpoint on the road to the air base where they were previously stationed.

After the incident, the major's body was reportedly taken by Russian troops.[12]

The base has two, parallel, southwest/northeast runways, a smaller east–west carrier landing facility, and an extensive dispersal complex to the north and west. The main base hangars and workshops are to the west of the runway complex.

The carrier take-off trainer faces northeast on the northern parallel runway. The carrier landing trainer is on the southwest end of that runway.