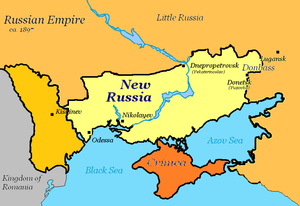 Novorossiya (from Russian: Новоро́ссия, Romanian: Noua Rusie; literally New Russia) is an historical term of the Russian Empire denoting a region north of the Black Sea (presently part of Ukraine). It was formed as a new imperial province of Russia (Novorosiiskaia guberniia) in 1764 from military frontier regions along with parts of the southern Hetmanate in preparation for war with the Ottomans.[1] It was further expanded by the annexation of the Zaporozhian Sich in 1775. It at various times it encompassed the Moldavian region of Bessarabia, the modern Ukraine′s regions of the Black Sea littoral (Prychornomoria), Zaporizhia, Tavria, the Azov Sea littoral (Pryazovia), the Tatar region of Crimea, the Nogai steppe at the Kuban River, and the Circassian lands.

The region was part of the Russian Empire until its collapse following the Russian February Revolution in early March 1917, after which it became part of the short-lived Russian Republic. In 1918, it was largely included in the Ukrainian State and in the Ukrainian Soviet Republic at the same time. In 1918–1920, it was, to varying extents, under the control of the anti-Bolshevik White movement governments of South Russia whose defeat signified the Soviet control over the territory, which became part of the Ukrainian Soviet Socialist Republic, within the Soviet Union from 1922.

Since the dissolution of the Soviet Union in 1991, there have been attempts to revive Novorossiya, the most significant of which has been the pro-Russian separatist movement to create a Novorossiyan confederation with the subsequent War in Donbass.

For more details on this topic, see Novorossiya Governorate. 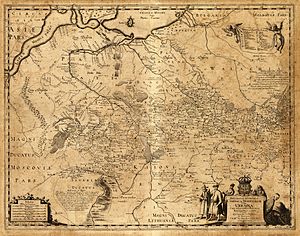 Ukraine 1648 (south on top) with a broad belt of "loca deserta", Latin for desolated areas 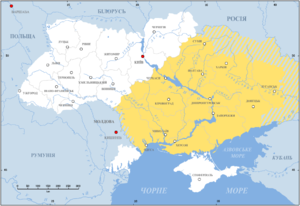 Map of the Wild Fields in the 17th century

The Crimean Khanate in 1600 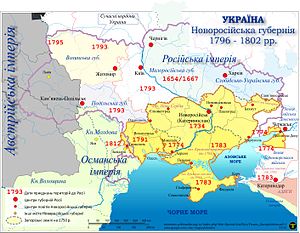 Novorossiysk Governorate of Russian Empire. Its central city was Dnipropetrovsk, which was briefly renamed "Novorossiysk" during the reign of Paul I

The modern history of the region follows the fall of the Golden Horde. The eastern portion was claimed by the Crimean Khanate (one of its multiple successors), while its western regions were divided between Moldavia and Lithuania. With the expansion of the Ottoman Empire, the whole Black Sea northern littoral region came under the control of the Crimean Khanate that in turn became a vassal of the Ottomans.[citation needed]. Sometime in the 16th century the Crimean Khanate allowed the Nogai Horde which were displaced from its native Volga region by Muscovites and Kalmyks to settle in the Black Sea steppes[citation needed].

Vast regions to the North of the Black Sea were sparsely populated and were known as the Wild Fields (as translated from Polish or Ukrainian) Dykra (in Lithuanian) or Loca deserta ("desolated places") in Latin on medieval maps. There were, however, many settlements along the Dnieper River. The Wild Fields had covered roughly the southern territories of modern Ukraine; some[who?] say they extended into the modern Southern Russia (Rostov Oblast).

The Russian Empire gradually gained control over the area, signing peace treaties with the Cossack Hetmanate and with the Ottoman Empire at the conclusion of the Russo-Turkish Wars of 1735–39, 1768–74, 1787–92 and 1806–12. In 1764 the Russian Empire established the Novorossiysk Governorate; it was originally to be named after the Empress Catherine, but she decreed that it should be called New Russia instead.[2] Its administrative center was at St. Elizabeth fortress (today, Kirovograd) in order to protect the southern borderlands from the Ottoman Empire, and in 1765 this passed to Kremenchuk.[2][3]

The rulers of Novorossiya gave out land generously to the Russian nobility (dvoryanstvo) and the enserfed peasantry - mostly from the Ukraine and fewer from Russia - to encourage immigration for the cultivation of the then sparsely populated steppe[citation needed]. According to the Historical Dictionary of Ukraine:

The population consisted of military colonists from hussar and lancer regiments, Ukrainian and Russian peasants, Cossacks, Serbs, Montenegrins, Hungarians, and other foreigners who received land subsidies for settling in the area.[4]

There was an initial endeavor to colonize the region with several ethnic groups, of which the most numerous were Romanians and Ruthenians (Ukrainians)[citation needed]. East of the Southern Bug river, in the region formerly called New Serbia, in 1757 the largest ethnic group were Romanians at 75%, followed by Serbs at 12% and 13% others.[5]

After the annexation of the Ottoman territories to Novorossiya in 1774, the Russian authorities commenced an aggressive program of colonization, encouraging large migrations from a broader spectrum of ethnic groups. Catherine the Great invited European settlers to these newly conquered lands: Romanians (from Moldavia, Wallachia and Transylvania), Bulgarians, Serbs, Greeks, Albanians, Germans, Poles, Italians, and others.

In 1775, the Russian Empress Catherine the Great forcefully liquidated the Zaporizhian Sich and annexed its territory to Novorossiya, thus eliminating the independent rule of the Ukrainian Cossacks. Prince Grigori Potemkin (1739-1791) directed the Russian colonization of the land at the end of 18th century. Catherine the Great granted him the powers of an absolute ruler over the area from 1774.[citation needed]

The spirit and importance of New Russia at this time is aptly captured by the historian Willard Sunderland,

The old steppe was Asian and stateless; the current one was state-determined and claimed for European-Russian civilization. The world of comparison was now even more obviously that of the Western empires. Consequently it was all the more clear that the Russian empire merited its own New Russia to go along with everyone else's New Spain, New France, and New England. The adoption of the name of New Russia was in fact the most powerful statement imaginable of Russia's national coming of age.[6]

In 1792, the Russian government declared that the region between the Dniester and the Bug was to become a new principality named "New Moldavia", under Russian suzerainty.[7] According to the first Russian census of the Yedisan region conducted in 1793 (after the expulsion of the Nogai Tatars) 49 villages out of 67 between the Dniester and the Southern Bug were Romanian.[8]

The ethnic composition of Novorossiya changed during the beginning of the 19th century due to the intensive movement of colonists who rapidly created towns, villages, and agricultural colonies. During the Russo-Turkish Wars, the major Turkish fortresses of Ozu-Cale, Akkerman, Khadzhibey, Kinburn and many others were conquered and destroyed. New cities and settlements were established in their places. Over time the ethnic composition varied.[clarification needed]

Multiple ethnicities[clarification needed] participated in the founding of the cities of Novorossiya (most of these cities were expansions of older settlements[9]). For example: 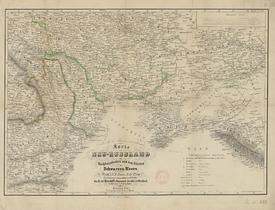 A historical German map of Novorossiya 1855

According to the report of governor Shmidt, the ethnic composition of Kherson Governorate and the city of Odessa in 1851 was as follows:[10]

From 1822-1874 the Novorossiysk-Bessarabia General Government was centered in Odessa.

With regard to language usage, Russian was commonly spoken in the cities and some outside areas, while Ukrainian generally predominated in rural areas, smaller towns, and villages.[clarification needed]

The 1897 All-Russian Empire Census statistics show that Ukrainian was the native language spoken by most of the population of Novorossiya, but with Russian and Yiddish languages dominating in most city areas.[11][12][13] 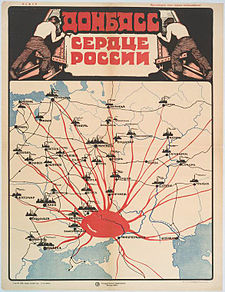 Russian poster from 1921 — "Donbass is the heart of Russia".

Many of the cities that were founded (most of these cities were expansions of older settlements[9]) during the colonial period are major cities today.

Imperial Russian regiments were used to build these cities, at the expense of hundreds of soldiers’ lives.[9]

Following the Soviet Union's collapse on December 26, 1991 and concurrent with the lead-up to Ukrainian independence on August 24, 1992, a nascent movement began in Odessa for the restoration of Novorossiya region; it however failed within days and never defined its borders.[15][16][17][citation needed] The initial conception had not developed exact borders, but focus centered on the Odessan, Nikolayev, Kherson, and Crimean oblasts, with eventually other oblasts joining as well.[17][18]

The name received renewed emphasis when Russian President Vladimir Putin stated in an interview on 17 April 2014 that the territories of Kharkiv, Luhansk, Donetsk, Kherson, Mykolaiv and Odessa were part of was called Novorossiya.[19][nb 1] In May 2014 the self-proclaimed Donetsk People's Republic and Luhansk People's Republic proclaimed the confederation of Novorossiya and its desire to extend its control towards all of southeastern Ukraine. The confederation had little practical unity and was dissolved within a year.[22]