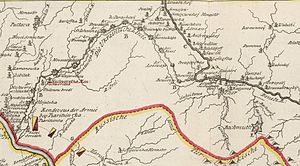 Map of the Ukrainian Line 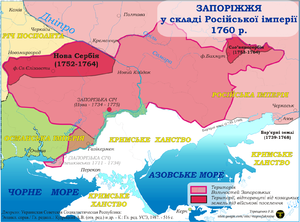 Zaporizhia Sich in 1760 with territories colonized by foreigners

New Russia Governorate or Novorossiya Governorate (Russian: Новоросси́йская губе́рния; translit.: Novorossiyskaya guberniya) was a governorate of the Russian Empire in the previously Ottoman and Cossacks′ territories, that existed from 1764 until the 1783 administrative reform. It was created and governed according to the "Plan for the Colonization of New Russia Gubernia" issued by the Russian Senate.[1] It became the first region in Russia where Catherine the Great allowed the foreign Jews to settle.[1]

Most of its territories belonged to the Zaporizhian Sich and the Poltava Regiment of the Cossack Hetmanate. Its establishment was strategically successful and advantageous for Russia and upon the conclusion of the war it gave a way for it to access the Black Sea and establish an area that became known as New Russia. It was created based on the Military Frontier of the Austrian Empire against the Ottoman Empire and involved many military units from the region that were resettled in Ukraine. The military units included mounted cossacks (or hussars) and mounted pikers (or lancers).

In 1796, the governorate was reestablished, but not with the centre in Kremenchug, but in Ekaterinoslav, and in 1802 was split into the Ekaterinoslav Governorate and two other Russian provinces.

It was created on 2 April [O.S. 22 March] 1764 as a military district for the protection of the southern border of the empire and in preparation for the major military campaign of the Russo-Turkish War. The governorate united the territories of New Serbia and New Sloboda (today in Kirovohrad Oblast) which were the northern regions of Buhohard Palatinate (Zaporizhian Sich). The governorate, centered in the fortress of Saint Elizabeth, initially was divided into three territories (polki) assigned to each regiment in the area: Elizabeth City Pikers Regiment, Black Hussars Regiment, and Yellow Hussars Regiment.

As of 22 June [O.S. 11 June] 1764 the governorate also included the so-called Ukrainian Line, a line of Russian built fortresses between Dnieper and Donets) that was administrated by the Dnieper and Donets Pikers regiments (based on the Habsburg's Pandurs, the cossacks of Poltava, the Myrhorod regiments), the Slavo-Serbia with Luhansk Pikers Regiment, and the Raiko Preradovic and Ivan Sevic Hussars regiments (soon the later two were united into the Bakhmut Hussars Regiment) as well as the Samara Hussar Regiment (originally the Moldavian Hussars Regiment based in Kiev).

The first capital of the governorate was the city of Kremenchug with the fortress of Saint Elizabeth (today Kirovohrad) being the main headquarters of local garrison.

In 1769-70 during the 1768-74 Russian-Ottoman War there was an uprising among the Dnieper and Donets Pikers regiments.[2] The unrest started on territory of today's Poltava Oblast and eventually spread across the lands of the Zaporizhian Host.[2] It was mercilessly put down by Russian Imperial forces and its instigators were punished by knout or sent to katorga.[2] The Donets Pikers Regiment eventually was forcefully sent to the war where it played a key role in forcing Syvash, taken of Perekop, Caffa (Feodosiya).[2]

In June of 1775 the Russian Imperial Army razed the capital of the Zaporizhian Sich, after which all its lands were annexed to the Novorossiysk Governorate. The following year the Bakhmut and Catherine provinces were transferred to the newly established Azov Governorate.

A Decree of 12 December 1796 set up a serf system on the territory of South Ukraine and Caucasus by attaching peasants to the land.