From Infogalactic: the planetary knowledge core
Jump to: navigation, search
Not to be confused with New Siberia.

Novosibirsk (Russian: Новосиби́рск; IPA: [nəvəsʲɪˈbʲirsk]) (“new city of Siberia” in Russian) is the third most populous city in Russia after Moscow and St. Petersburg and the most populous city in Asian Russia, with a population of 1,473,754 as of the 2010 Census.[12] It is the administrative center of Novosibirsk Oblast as well as of the Siberian Federal District. The city is located in the southwestern part of Siberia on the banks of the Ob River adjacent to the Ob River Valley, near the large water reservoir formed by the dam of the Novosibirsk Hydro Power Plant,[19] and occupies an area of 502.1 square kilometers (193.9 sq mi).[11] 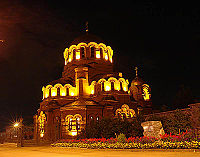 Novosibirsk, founded in 1893[16] at the future site of a Trans-Siberian Railway bridge crossing the great Siberian river of Ob, first received the name Novonikolayevsk (Новониколаевск),[17] in honor both of Saint Nicholas and of the reigning Tsar Nicholas II in place of Krivoshchekovskaya village, which was founded in 1696. The bridge was completed in the spring of 1897, making the new settlement the regional transport hub. The importance of the city further increased with the completion of the Turkestan-Siberia Railway in the early 20th century. The new railway connected Novosibirsk to Central Asia and the Caspian Sea.[20]

At the time of the bridge's opening, Novonikolayevsk hosted a population of 7,800 people. Its first bank opened in 1906, with a total of five banks operating by 1915. In 1907, Novonikolayevsk, now with a population exceeding 47,000, was granted town status with full rights for self-government. The pre-revolutionary period saw the population of Novosibirsk reach 80,000. During this period the city experienced steady and rapid economic growth, becoming one of the largest commercial and industrial centers of Siberia and developing a significant agricultural processing industry,[21] as well as a power station, iron foundry, commodity market, several banks, and commercial and shipping companies. By 1917, Novosibirsk possessed seven Orthodox churches and one Roman Catholic church, several cinemas, forty primary schools, a high school, a teaching seminary, and the Romanov House non-classical secondary school. In 1913, Novonikolayevsk became one of the first places in Russia to institute compulsory primary education.[20]

The Russian Civil War took a toll on the city, with wartime epidemics, especially typhus and cholera, claiming thousands of lives. In the course of the war the Ob River Bridge was destroyed and for the first time in its history the population of Novonikolayevsk began to decline. The Soviet Workers' and Soldiers' Deputies of Novonikolayevsk took control of the city in December 1917. In May 1918, the Czechoslovak Legions rose in opposition to the revolutionary government and, together with the White Guards, captured Novonikolayevsk. The Red Army took the city in 1919, retaining it throughout the rest of the Civil War.[20]

One of the best examples of the early Soviet history is the Monument to the Heroes of the Revolution. It is located right in the center of the city and was one of the main historic sites (essentially every child had to visit the monument on school field trips during Soviet years). Then it was neglected in the 1990s and as a result somewhat ironically it turned out to be one of the best preserved Soviet-era sites.[citation needed]

During Stalin's industrialization, Novosibirsk secured its place as one of the largest industrial centers of Siberia. Several massive industrial facilities were created in there, including the 'Sibkombain' plant, specializing in the production of heavy mining equipment. Additionally a metal processing plant, a food processing plant and other industrial enterprises and factories were built, as well as a new power station. The Great Soviet Famine saw the influx of more than 170,000 refugees to Novosibirsk. The new arrivals settled in barracks at the outskirts of the city, giving rise to slums such as Bolshaya Nakhalovka, Malaya Nakhalovka, and others.[20]

Rapid growth and industrialization were the reasons behind Novosibirsk's nickname: the "Chicago of Siberia".[23]

Tram rails were laid down in 1934, by which time the population had reached 287,000, making Novosibirsk the largest city in Siberia. The following year the original bridge over the Ob River was replaced by the new Kommunalny bridge.[20]

Between 1940 and 1942 more than 50 substantial factories were crated up and relocated from western Russia to Novosibirsk in order to reduce the risk of their destruction through war, and at this time the city became a major supply base for the Red army. During this period the city also received more than 140,000 refugees.

The rapid growth of the city prompted the construction during the 1950s of a hydroelectric power station with a capacity of 400 megawatts,[24] necessitating the creation of a giant water reservoir, now known as the Ob Sea. As a direct result of the station's construction vast areas of fertile land were flooded as were relic pine woods in the area; additionally, the new open space created by the reservoir's surface caused average wind speeds to double, increasing the rate of soil erosion.[20]

In the 1950s, the Soviet Government directed that a center for scientific research be built in Novosibirsk, and in 1957 the multi-facility scientific research complex of Akademgorodok was constructed about 30 kilometers (19 mi) south of the city center. The Siberian Division of the Academy of Sciences has its headquarters in Akademgorodok, and the town hosts more than 35 research institutes and universities, among them Novosibirsk State University, one of the top Russian schools in Natural Sciences and Mathematics. Although it possesses a fully autonomous infrastructure, Akademgorodok is administered by Novosibirsk.

On September 2, 1962, the population of Novosibirsk reached one million. At that time, it was the youngest city in the world with over a million people. Novosibirsk took fewer than seventy years to achieve this milestone.[25]

In 1979, work began on the Novosibirsk Metro Transit System, culminating in the opening of the first line in 1985.[20]

On August 1, 2008, Novosibirsk was in the center of the path of a solar eclipse, with a duration of 2 minutes and 20 seconds.

People from over eighty ethnicities and nationalities reside in Novosibirsk. The largest groups are Russian, German, Ukrainian, Tatar, Jewish, and Belarusian.[29]

The best-known trees native to Novosibirsk are birch, pine, and aspen. Some mountain ash, hawthorn, spruce, and fir are also present. European species of apple, ash, elm, linden, and oak have been successfully introduced.

Large mammals native to the Novosibirsk area include the brown bear, reindeer, moose (elk), wolf and fox. Also present are wolverine, ermine, marten, weasel, and polecat. The predators among them are supported by populations of beaver, hare, mouse, hamster, vole, shrew, squirrel, and chipmunk. More than 350 species of birds have been recorded in the area. On the other hand, only a few cold-blooded vertebrate species live on land, but they include the venomous adder and the swift grass snake. Perch and carp are prominent among the fish, of which there are more than thirty species. The carp often host a dangerous parasite, the liver fluke. Ticks in the area are frequent carriers of viral encephalitis.

The city stands on the banks of the Ob River in the West Siberian Plain. To the south of the city lies The Priobskoye Plateau.

The weather in Novosibirsk is like the rest of typical Siberia, with a clear sky and far below freezing winter temperatures. The reason for these temperatures is the absence of nearby ocean, the Ural Mountains, barring Atlantic air masses from reaching Siberia, and the lack of tall mountains at the north of Novosibirsk, that could have held back freezing Arctic winds. In fact, Novosibirsk is the second farthest substantially populated city from the ocean, the first being Ürümqi, China.

Travelers coming from countries with mild climates may find Novosibirsk’s winter tough, but it may not be extraordinary for those from northern countries. At times, bitter cold may hold for some days, but temperatures of −40 °C (−40 °F) and lower do not occur every year. In the springtime, streets and roads become dirty as a result of mud and melting snow, while the weather is still cold.

Novosibirsk is home to Russia's most powerful shortwave relay station east of the Ural mountains. This relay station can reach most of South Asia, the Middle East, and China. The Magadan and Vladivostok relay stations when operated in conjunction with Novosibirsk can guarantee that the Voice of Russia or any other broadcaster renting time at Novosibirsk is heard in the intended target area.

Novosibirsk is the third-largest city in Russia (after Moscow and St. Petersburg) and the first in Siberia in which a metro system was established (the Novosibirsk Metro, opened in 1985). It is a major stop on the Trans-Siberian Railway and north end of Turkestan–Siberia Railway. The city is served by Novosibirsk Tolmachevo Airport with regular flights to Europe and Asia as well as to other Russian cities. Tolmachevo is the hub for S7 Airlines. There is also the auxiliary Yeltsovka Airport. A smaller field for general aviation at Novosibirsk Severny Airport was closed in 2012.

File:Novosibirsk Kommunisticheskaya 50.jpg
One of the city's new high-rises, photo from 2006 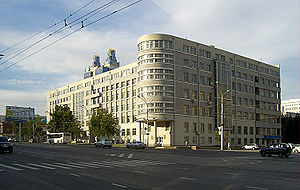 The administrative building of Novosibirsk Oblast

According to the television station RBC Novosibirsk took third place in 2008 in the list of the cities of Russia most attractive to business (in 2007 it was placed thirteenth).

Before the relocation of its headquarters to Ob, S7 Airlines had its head office in Novosibirsk.[32]

The headquarters of a number of large Russian companies are located in Novosibirsk:[33]

Several professional sports clubs are active in the city:

Novosibirsk is the home town of several former Olympians, including Alexander Karelin, a twelve-time world Greco-Roman wrestling champion who has been voted the greatest Greco-Roman wrestler of the twentieth century by FILA.

The City also hosts a number of National and International Ice Speedway events. Siberia Novosibirsk competed in the Russian Ice Speedway Premier League in 2012/13, and will do so again in 2013/2014. 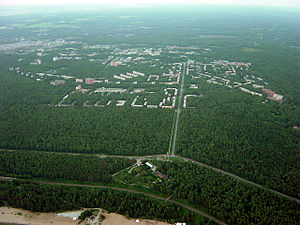 Akademgorodok is a suburb of Novosibirsk dedicated to science. It houses the Siberian division of the Russian Academy of Sciences and is the location of Novosibirsk State University. (All other higher education institutions are located in the central part of the city.)

16 cinemas, including Cinema Park which supports IMAX and IMAX 3D.

Novosibirsk Planetarium (2012)[35] was awarded in 2015 as the best social infrastructure object in Russia.[36]

The Novosibirsk Zoo is a world-renowned scientific institution as well as a popular tourist attraction. The zoo has over four thousand animals and is an active participant in thirty-two different captive breeding programmes for endangered species. On average, around 700,000 people visit the zoo each year.

Novosibirsk is twinned with: