Novosibirsk State University was founded in May 1959 in the USSR by Soviet academicians Mikhail Alekseevich Lavrentiev, Sergei Lvovich Sobolev and Sergey Alekseyevich Khristianovich in a program of establishing a Siberian Division of the USSR Academy of Sciences. Novosibirsk State University is one of the most famous universities in Russia, although is somewhat young. The university is located 20 kilometers from the city of Novosibirsk, a cultural and industrial center of Siberia. The total number of students in the year 1999 was 5200. Lua error in Module:Coordinates at line 668: callParserFunction: function "#coordinates" was not found.

Three fellow members of the USSR Academy of Sciences Lavrentiev, Sobolev, and Khristianovich, decided to bring international level research over the Urals from Moscow to the vast territories of Siberia. Siberia possessed copious natural resources, but lacked large research institutions which would promote economic development and growth in the region. The idea was implemented with the establishment of the Siberian Division of the USSR Academy of Sciences in 1958 near the large industrial city of Novosibirsk. A new academic town (Akademgorodok) started to grow rapidly and half a year later a new university was founded to train young researchers for the newly born science center. 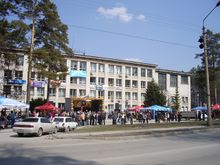 Thus, in May 1959 the USSR Higher Education Ministry issued a decree to begin studies in Novosibirsk State University on September 1, 1959 with Ilia N. Vekua as rector (Russian for president or chancellor of a university). The July 20, 1959 issue of the newspaper Pravda reported the opening of the new university and announced admittance with entrance examinations for future students from all over the USSR in the period of August 1 through 20. 139 first-year students were admitted as full-time students and 119 as part-time students. In addition, the best students from other Soviet universities were selected as second-year students. The applicants for chemistry and physics accounted for eight and five persons per vacancy respectively, with three persons for mathematics, mechanics and geology.

The official opening of the University took place on September 26, 1959 at the Concert Hall of the Opera and Ballet Theater in Novosibirsk.

First lectures were held in the building of a secondary school, and first dormitories for the students were just tents amidst the forest; but the spirit of novelty and the lust for education and research created a strong motivation among the first students.

At first, the only department of the University, the Department of Natural Sciences, combined Mathematics, Physics, Mechanics, Biology, Chemistry and Geology. Between 1960 and 1967 new departments began to separate into their own disciplines. In December 1963 the first graduates of the Novosibirsk State University, including 26 physicists, 24 mathematicians and ten researchers in mechanics, received diplomas.

The Department of Natural Sciences offers majors in Chemistry and Biology. In five years of training the graduates receive a Specialist's degree. The training program includes two years of research practice in a specific area of Chemistry and Biology with writing a thesis. From 1992 to 2000 a major in Environmental Chemistry (also known as Ecology) was offered based on a 2-level training system (4 years of undergraduate training for Bachelor's degree and 2 years of training for Master's degree). The program was based on the Chemistry major curriculum with addition of extra mathematics, informatics and biology courses. Since 1995 a major in Medical Biology has been offered. The aim of this enterprise was to begin training Research Doctors of Medicine in the department. A state license allowing the training of general practitioners was obtained in 2002 . Finally, in 2004 another new department, the Department of Medicine sprung from the Department of Natural Sciences [1].

Department of Mathematics and Mechanics

In the USSR and subsequently in Russia, universities serve primarily as educational institutions, in which faculty members rarely do research and focus on training students. Research and graduate training exist in separate research institutions. The main idea of the founders of NSU was to combine research and education in the University by inviting scientists from the nearby research institutions in Akademgorodok as part-time university faculty. This allowed students to gain laboratory experience in addition to regular coursework. Additionally, it allowed students to undertake the writing of theses.

This idea propelled NSU toward becoming arguably one of the best Russian universities. However, this design also led to a number of disadvantages. In official ratings of Russian universities NSU is not near the top. This may be attributed to the fact that the ratings do not consider part-time staff and only account for volumes of the university library, while NSU students also have access to a number of institute libraries as well as the large Academy of Sciences Library which is located across the street from the main University building. Another disadvantage is that NSU trains researchers mainly for the Academy of Sciences; therefore, non-science majors are underrepresented in the University. To attempt to correct this imbalance, Law, Medicine, Foreign Languages, and a few other departments were added recently. However, in conditions of post-perestroika financial crisis in Russian higher education, this innovation has received a great deal of criticism. Critics say that new departments drain money from the science departments from which NSU draws its reputation.[citation needed]