Nowata County is a county located in northeastern Oklahoma. As of the 2010 census, the population was 10,536.[1] Its county seat is Nowata.[2] The county name is derived from a Delaware word "no-we-ata," meaning "come here" or "welcome."[3][4] It is located on the Kansas border. 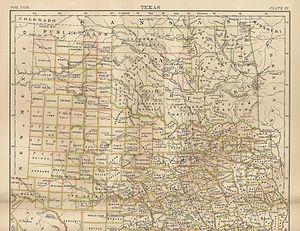 For millennia, the land now known as Oklahoma was inhabited by Native Americans. The Encyclopedia of Oklahoma History and Culture states that archaeological evidence indicates that humans first lived in this area in the Verdigris River valley over six thousand years ago.[3] In the 17th century, white trappers first visiting the area found it occupied mostly by the Osage and Quapaw tribes. It was recognized as Osage territory by the time United States secured it as part of the Louisiana Purchase in 1803. In 1819, the Arkansas Territory was organized, then was split in 1824 and 1828. An 1828 treaty with the Cherokee Nation assigned the area of Nowata County to the Cherokees, who included it in 1856 in their newly created Cooweescoowee District. The Cherokees and the Delaware signed a treaty in 1867 that resulted in Delaware settlements near the present towns of Delaware, Lenapah and Nowata, Oklahoma.[3]

The state of Oklahoma and Nowata County was established in 1907, and the county had a population of 10,453. The town of Nowata was named as county seat.[3] The exact origin is unknown, but the two most common stories are that railroad surveyors used the Delaware word noweta for welcome or that a sign was posted indicating that local springs had no water: No wata.

The followings sites in Nowata County are listed on the National Register of Historic Places: